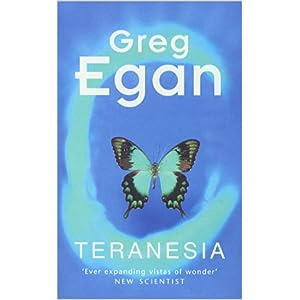 This novel cunningly avoids two clichés of the science fiction genre, something that in itself makes Teranesia an interesting read for aficionados. The first, one which has tended the ghettoisation of science fiction as a genre considered suitable only for adolescents, is the coming of age story of a precocious teenager. Central character Prabir Suresh is certainly precocious, but his adolescent years are omitted - in part one he is not yet a teenager, and in part two and the rest of the novel he is in his twenties. The second cliché is the science fiction novel which is more interested in ideas than people, something which is a problem with other Egan novels. Prabir is an interesting central character not just because a homosexual non-Caucasian hero is unusual in genre fiction, and his personality is made more central than the idea. (This is why it takes almost the whole novel for it to become clear just what its main idea actually is.)

In part one, Prabir is a nine year old child, living on an otherwise deserted Indonesian island with his biologist parents and baby sister; his parents are there to investigate some strange mutations in the butterflies of the region. Political instability becomes civil war, and armed men kill the adults; the children are able to escape and end up in Canada with their aunt (made a figure of fun by Egan for her post-modern relativist ideas). In part two, about fifteen years later, Prabir has a strong emotional reaction when his sister (now a student) wants to join an expedition to that part of Indonesia, where abnormalities are beginning to be observed in a wider range of animals.

The biggest problem that Teranesia has is its ending - which it is not really possible to discuss without giving it away (so you are warned!). Things seem to be heading towards a bleak finish rather similar to Kurt Vonnegut's Cat's Cradle, when a frankly unconvincing happy ending is suddenly contrived. It undermines the whole novel, leaving the reader unsatisfied. Up until the last ten pages, Teranesia is a most enjoyable read, better than most genre novels.
Posted by Simon McLeish at 11:46 No comments: 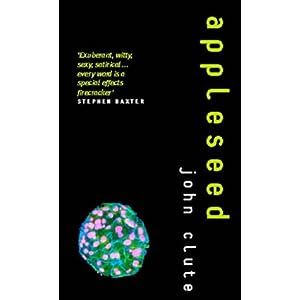 Until the publication of this, his début novel, John Clute has been best known for writing about science fiction rather than in the genre, and his wide ranging knowledge shows in Appleseed's cross references. The most obvious link, as far as a reader is concerned, is not within the genre, but to the novels at the more flamboyant end of stream of consciousness, to James Joyce's Ulysses, for example, or to the richness of Borges.

The plot is less important than the imagery and, indeed, is pretty rudimentary; the novel describes a trip to a world on which a cure might possibly be found for plaque, a disease which attacks both machine and organic intelligence. The densely packed allusive style in with Appleseed is written also makes it hard to read, particularly when it comes to picking up the details of the plot. (Stream of consciousness novels are frequently difficult to read, and in each case the reader must decide whether it is worth the effort to decode them; a typical snippet of Appleseed, for instance, reads: "A mask bearing the fist appaumy spoke. 'Queens have died', said the Uncle Sam, 'young and fair.'")

One of the biggest technical challenges in science fiction writing is to find a way to represent the alien, whether it is a non-human intelligence or the effects of new technology on human psychology and culture. (You could in fact argue that this is the very essence of the genre.) This is the purpose for which Clute has chosen to use this style, to render an almost incomprehensible universe (and there is, after all, no particular reason why we should understand the real universe) - home to many aliens and a bizarre mix of reality and virtual reality. It's a clever idea, and often works well (for example, in the humorous description of the rituals following an alien birth, which is the best passage in the novel). In general, though, I didn't feel that Clute was a good enough writer to carry it off, and this combines with the minimal plot to make some sections seem more about flashy prose than substantial content. There are many interesting ideas, particularly the use of this style to convey alienness, so Appleseed is worth a read if you're interested in literary technique. I can't help feeling that CLute would have done better to attempt something less ambitious for his debut.
Posted by Simon McLeish at 11:19 No comments:

Michael Moorcock: The Dragon in the Sword (1986) 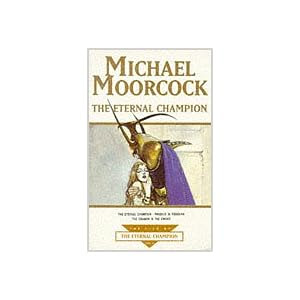 The third John Daker novel appeared after an even longer interval than that between the first two, and seems to represent at least some of Moorcock's final thoughts on the Eternal Champion as the novel of that name had done the first. Both heroics and traditional fantasy appear much less frequently in Moorcock's work after this novel; Pyat may consider himself a heroic figure in Byzantium Endures, for example, but there is little if anything about him to bring admiration from the reader.

The Dragon in the Swoord is also related to the von Bek stories, and follows on directly from the short story The Pleasure Gardens of Felipe Saggitarius, about a failed attempt by a member of the family to assassinate Hitler. This von Bek escapes by travel to another universe, to the one where Daker also arrives after attempting suicide in despair at continuing to be parted from his beloved Ermizhad.

The form Daker takes on this new world is interesting. He is now in the body of a prince with a twin sister; their relationship is not what it is generally seen to be. She wanted to cement her power by marrying him, but then tried to kill him when he refused. Now the rumours she has spread mean that his status among those he first meets changes rapidly from honoured guest to someone tolerated only because of the laws governing hospitality, making his task as Champion yet more difficult.

As a literary idea, the Eternal Champion relies strongly on Moorcock's ability to create multiple variations on the character. In The Dragon in the Sword, he brings two incarnations of the Champion together. This is not the only time he does this (The Quest for Tanelorn is another example), but in this case Daker and von Bek are made more nearly equal in importance. Despite their similar origins (both coming from twentieth century Europe), the two are strongly contrasted, particularly in comparison to other novels involving multiple Champions, which tend to be aiming to highlight the similarities between them.

The Dragon in the Sword also stands out as one of the longest Eternal Champion (in the more general sense, rather than just this particular trilogy) novels, the complexity of the plot being a major reason for this. It wraps up a long chapter in Moorcock's literary life (and does this additionally by including a lot of the lyrics from the album he co-wrote with Hawkwind, Warrior on the Edge of Time, and looks forward to some of his pre-occupations of the next few years as well as backwards.
Posted by Simon McLeish at 11:06 No comments: