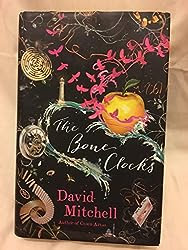 The Bone Clocks tells the story of the life of Holly Sykes, from her teenage years in Gravesend in the 1980s through to the mid twenty first century. This immediately makes it unusual: most novels are either fairly firmly set in a recognisable past (or more or less present) or in the future. Mitchell also combines, as in several of his other novels, fantasy elements with naturalistic and real world events, such as the war in Iraq.

This is a novel in which it is quite hard to work out what is going on, at least at first reading. Some things are clear: Holly has the second sight (though that term isn't used by Mitchell) and has visions of the future. There are characters who have access to something they call "the script", but their role in the story is not properly explained until near the end. These characters appear mysteriously at moments in the story when an important choice is to be made by one of the more reality bound characters.

The Bone Clocks is episodic in nature. There are lengthy gaps between the dates at which each is set, sometimes decades, and they are not all told from the same point of view. They do make the story a little bit harder to grasp, though the arrangement is not as complex as the structures of some of Mitchell's other novels (the episodes are presented in chronological order). Paradoxically, though, I found The Bone Clocks much harder to read than these earlier books. Each episode was individually interesting, but there is not really a sense of where things are leading to. A character is shared with The Thousand Autumns of Jacob de Zoet, but that does not help make things clearer.

The resolution of the mystery of the script does make everything a lot clearer, but it is a very long time coming (I think this is Mitchell's longest novel by quite some way). Even though I am usually a big fan of the author, I felt that it didn't really prove worth the wait. If I had been new to Mitchell's work, I probably would never have gone on to read his other novels, and this would have been a pity. So I would suggest starting elsewhere and come to The Bone Clocks later, if you like Ghostwritten or number9dream. Even then, I feel that the books of Nick Harkaway or Haruki Murakimi are a better follow-up to Mitchell's early work than The Bone Clocks.

The "bone clocks" of the title are human bodies, referring to the ageing process. Ageing and time are the main themes of the novel, though it is also about how something magical can touch the most banal of lives - even someone growing up in Gravesend in the eighties.

Not Mitchell at his dazzling best - but still reasonably enjoyable and intersting. My rating: 7/10.
Posted by Simon McLeish at 09:54 No comments: