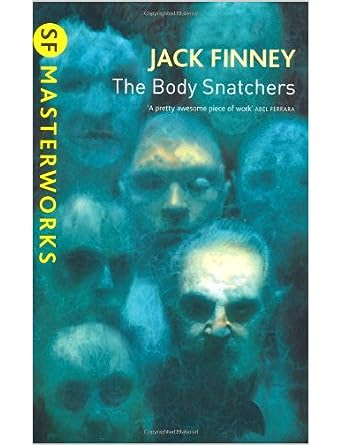 Jack Finney's most famous novel, filmed four times (and also known, like two of the films, as The Invasion of the Body Snatchers), is a masterclass in how to manage tension in a thriller.

The story is set in the small town of Santa Mira (oddly, wrongly named on the back cover of this edition) in northern California, a place where seemingly nothing ever changes. The narrator is the town's doctor, Miles Bennell, and begins when a patient comes to see him with a bizarre story: her uncle is no longer her uncle. Things escalate, and it soon appears that only a few humans are left in a town where everyone else has been replaced by aliens who look identical to the originals and even share their memories.

The way that the tension is built up is fairly obvious. Each chapter ends with a statement of increasing loneliness, as more and more possibilities are blocked off (the phone exchange is taken over, a friend in the army is unable to help, and so on).  It's a simple trick, but very effective.

There has been a fair amount of criticism of The Body Snatchers over the years. Its science is clearly suspect, though that is true of a lot of science fiction. Here, though, there is some self-contradiction (the pods from which the aliens come are said to be moved by light pressure, but then rise from the surface of the earth, for example). It has a straightforward plot, and the characters other than Miles are basically ciphers.

In the earliest film version, the alien interlopers are clearly signposted as a metaphor for Communist infiltration into the US of the fifties. As Graham Sleight points out in his introduction to this edition, this interpretation is not anything like as obvious in the novel: it is consistent with it, but not required. I would agree with him that what comes across more as the point of Finney's writing is related to the end of the innocent small town community portrayed in Santa Mira at the beginning of the story. Even in that now lost (and possibly never really existing) culture, did anyone really know their neighbours through and through?

But these issues do not prevent The Body Snatchers from  being a much loved genre classic, and the way that Finney constructs the story and carries the reader along into an increasingly paranoid and tense situation is the reason why. My rating: 9/10.

Posted by Simon McLeish at 18:20 No comments:

Wayne Williams and Darren Allan: I Know What You Did Last Supper (2013) 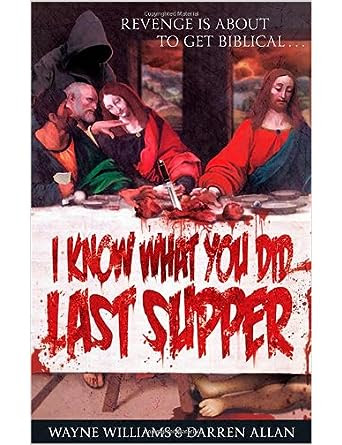 I initially hesitated about reviewing this novel when I was asked to do so, because of the subject matter, but decided that it is wrong to effectively condemn anything without experiencing at least part of it. I probably would not have picked it up, though, unless I'd been asked to review it (hence the introduction of a new tag for books submitted for review).


The basic premise of I Know What You Did Last Supper is that Judas Iscariot receives a threatening message after his betrayal of Jesus Christ, before his friends and family start being gruesomely murdered one by one. The title suggests an outrageously silly take on this, but that is not what the novel is: instead, it is a fairly standard thriller in terms of plot.(Others may find the way it is written funny, but I felt that the killings were really too gruesome for this.) To my mind, it has to succeed as a thriller before getting to the question of the content, which may well be offensive to some.

As a historical novel, it does rather come up short. There is little real atmosphere of first century Palestine, and many of the actions which happen are more or less transpositions of modern day actions to the period - when Judas goes out and buys a flashy black stallion with the money paid to him as the price of his betrayal, the transaction hardly differs from a purchase of a shiny black convertible in Los Angeles. There are events which don't really ring true, particularly in the portrayal of religion. For example, it seems unlikely that so many people would ignore the Sabbath at this time in Jerusalem. So, not convinced by the setting. I had the impression from somewhere that "Iscariot" is thought to be a nickname, from the Sicarii, a group of Jewish nationalists, not a surname in the sense that we use them, so that Judas' father is unlikely also to be known as Iscariot.

And as a thriller? I'm not entirely convinced here either.  The thriller plot, with Judas basically flailing around trying to work out who is killing people, is basic and unoriginal, though it does have a couple of interesting twists, which I will discuss as part of the religious content. The final revelation was, to me, long anticipated and unconvincing.

The Christian content seems, to at least a certain extent, designed to shock. Some of this is done at the expense of verisimilitude, as when, for example, Judas suspects that it is the resurrected Jesus who is using supernatural powers to kill those close to him as a punishment for his act of betrayal - not really likely in the sort of person that Jesus is otherwise portrayed to be in this novel as well as in the gospel narrative. Not validated by the quality of the treatment, the use of Christianity is just offensive for its own sake, which is the least excusable form of offensiveness. There are a couple of redeeming features. One - the one which is most important to me - is that the novel reminds its readers that the disciples portrayed in the Bible were people, even Judas. The other  is that the most interesting thing about Judas' character as depicted here is the motivation for his original betrayal, which is not considered important by the gospel writers, but which is something very important to modern readers of crime fiction. So Judas is given one, and it is because he wants to save his uncle from a vicious criminal boss who wants his gambling debts paid off.

In the end, the redeeming features were not enough for me to truly enjoy reading the novel. My rating - 3/10.
Posted by Simon McLeish at 20:56 No comments: