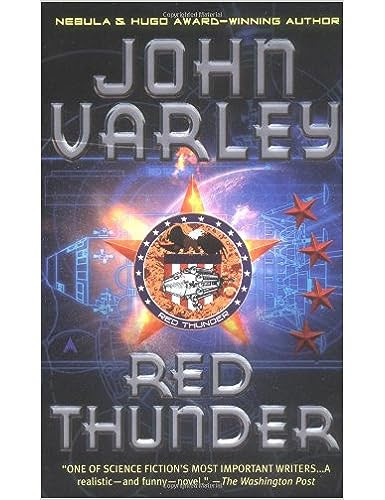 Heinlein's science fiction novels were the introduction which many fans had to the genre for a long time, and his stories for young teens in particular have been hugely influential, whether loved or hated. When writing for younger readers, many science fiction authors have struggled to throw off the need to copy his self-reliant, competent, science-obsessed teenage boys who succeed where adult professionals could not. They are clearly very appealing to the sort of bright, but not socially successful teens who are stereotypically genre fans.

In Red Thunder, John Varley seems to me to have been unable to make the final decision whether he wanted to produce a homage or a parody. Often funny, it warps Heinlein's stock plot elements with a great deal of affection.

The main characters are a group of Florida teens - high school leavers failed by the local education system, but who are obsessed with space travel  - and a disgraced former astronaut they almost kill when driving along the beach at night while he is lying on it in a drunken stupor. When it becomes clear that the United States will be beaten to land humans on Mars by China, they put together a space ship of their own, pretty much out of junk, and set of to arrive before the Chinese.

This pretty ludicrous plot is clearly a parody of Heinlein, and by bringing in girls and making his characters flawed, Varley makes pretty obvious points about the some of the more obvious limitations of the earlier man's work. The unlikelihood that teens and a broken man can succeed in an enterprise which stretches the richest nations on Earth is made even more obvious because it is founded on an impossibility, the discovery of a new kind of propulsion, described as "free energy" - a perpetual motion machine.

Three of my favourite science fiction books have very heavy debts owing to Heinlein: Ender's Game; Orbital Resonance; and Saturn's Children. Red Thunder is not quite as good as any of these, but is less serious in tone, so it is a lighter read (not that any of the others are particularly heavy). I enjoyed it a lot, which is not something I always feel about Varley's fiction; it could well be the most fun of any of his novels. My rating: 8/10.
Posted by Simon McLeish at 08:16 No comments: