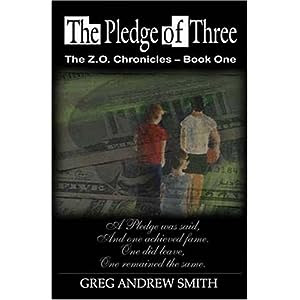 Zack Owens, a bored schoolboy waiting for his mother to finish work, is trying to amuse himself in the office of her employer. He picks up a book on medieval history, and a piece of paper falls out. This describes the Pledge of Three, which when recited by three friends together affects their futures: one will become rich and famous, one will be unchanged, and one will die. Rather unwisely, he takes the paper and shows it to one of his school friends, who is excited by the idea and wants to try it. It is only after some disturbing dreams and seeing an odd website that Zack agrees - a few days before his mother wins the state lottery.

Aimed at young teenagers, The Pledge of Three turns out to be quite an intriguing novel. While the idea of young people becoming involved in something they don't understand is hardly original (recent well-known examples including both Harry Potter and Buffy the Vampire Slayer), it is handled well, with an X Files-like unwillingness to decide whether it is describing magical events (putting in the fantasy genre) or a complex hoax (which would put it in the crime genre) that marks it out. The other reason why this novel is better than the average is the characterisation of Zack, who is made deeper by the way that his initial reluctance to become involved with the Pledge is overcome. Indeed, despite not being in the target age range by some two decades, I found myself keen to keep reading from chapter to chapter, and would certainly be interesting in reading sequels (The Pledge of Three being the first of a series, the Z.O. Chronicles).

The Pledge of Three is not faultless; there are occasional infelicities in the writing, particularly in the early chapters. For example, "soft-spoken" is not really the most common adjective to apply to people, but the first chapter uses it to describe two characters in the space of a few pages, which gives the reader a little jolt. I have not been a school pupil for a long time, and was never one in the US, but some details struck me as unlikely (is it really that easy to walk out of a class?) - basically, the plot and the setting could be better integrated. Once the reader is drawn into the story, which happens pretty quickly, this sort of issue ceases to matter.

Lucky Press are not a publisher I have come across before, and judging by their list, this kind of fiction, on the boundary between thriller and fantasy and aimed at the teen market, is a new departure for them. I hope that The Pledge of Three receives the success it deserves and that the Lucky Press won't be too strongly stereotyped as purveyors of lurid self-help books to get it into the shops.

Posted by Simon McLeish at 09:26 No comments: