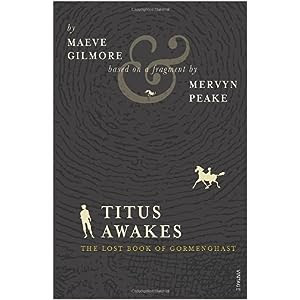 The Gormenghast trilogy, by far Mervyn Peake's best known work as a writer, has many fans, including myself. And fans always want more, so we were intrigued when the publication of Titus Awakes was announced last year. Maeve Gilmore was Peake's widow (and, like her husband, an artist), who edited the fascinating but uneven compilation of Peake's less well known work, Peake's Progress. One of the items included there was the sketchy plan which eventually became Titus Awakes: a list of single words which form the themes of each of the chapters. There was also a draft of the first chapter, which I don't think was included (my copy of Peake's Progress being packed in a cardboard box in the garage, I can't easily check). Ironically, this completion of a lost novel was itself lost on Gilmmore's death in the eighties, only to be found in 2011.

The end of Titus Alone found Titus wandering in the vicinity of his ancestral home, Gormenghast Castle, before deciding to leave again. Titus Awakes begins at this point, with a brief scene between the Countess, Titus' mother, and Doctor Prunesquallor, also a character in the earlier books and fellow inhabitant of the castle. After these couple of pages, the rest of the chapter follows Titus closely, as he descends from the mountain on which the castle is built and sets off again. This is the end of the material that Peake wrote, and Gilmore then continues in the same vein.

The story consists of a series of bizarre adventures, much like those in Titus Alone, until the young man ends up in Sark, a plan which Peake divulged to his wife. Once this happens, the story has much more life; Maeve Gilmore was pretty clearly more comfortable writing about a real place familiar to her. Parts are clearly based on the writer's own life (and acknowledged as such in the introduction). This includes a sombre episode in which Titus, working temporarily at a mental hospital, meets Mervyn Peake as a patient visited by his wife Maeve Gilmore. Though all three do leave the hospital - Peake being misdiagnosed - its unending grey hopelessness is portrayed in what is probably the best written and certainly the most striking section of the novel.

The intention of the story, as in Titus Alone, is to use some of the external details of the situations in which Titus finds himself as allegorical mirrors of his growth as an individual. This means that the narrative is again heavily focused on the protagonist. I find this something of a problem with both books, as to me, and, I suspect, to many other readers, the most interesting aspect of Titus Groan and Gormenghast is the castle and the strange, ritualised lives of the grotesques who live there. While Titus psychologically needs to escape, and never quite manages to do so, the young man at the end is not as interesting as he is as the Earl of Groan, centre of the castle's culture, and the people he meets, no matter how strange, are never as interesting as the inhabitants of the castle. It must be said, too, that Peake's imagination for the bizarre is better than Gilmore's, making Titus Alone a more interesting read than Titus Awakes.

Titus Awakes is no masterpiece, no stunning new addition to the Peake canon. Few readers will have been expecting it to be, especially if Titus Alone seems less than stellar to them already. What it does offer is a glimpse at the intentions which Peake had for the later adventures of his best known character, and a measure of resolution to a story which was lacking it. My overall rating - 6/10, mainly because it is most like my least favourite novel in the original trilogy.