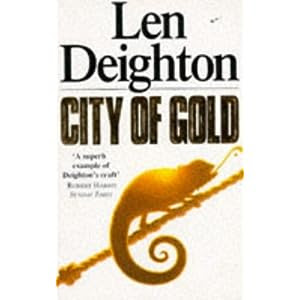 Len Deighton is almost as famous for his meticulously researched World War II stories (and non-fiction) as he is for his Cold War spy thrillers. City of Gold is his farewell to this sub-genre, and I think it is the best of his late novels. Like several others of his Second World War stories, it is inspired by actual events; set in Cairo during the North African campaign, it tells of the hunt for a spy who was revealing all the details of the Allied plans to Rommel, thus enabling him to win victory after victory and make the capture of Cairo seem only a matter of time. The investigation is given a twist because the reader knows that investigator Major Cutler is not really who he appears to be; he suffered a fatal heart attack escorting a prisoner to Cairo, and the prisoner, who was an actor before being conscripted, is now pretending to be the major. So as well as having to make an investigation he is not trained for, he is constantly worried about the possibility of discovery.

This twist adds an extra touch of humanity to the story, which otherwise could easily have been dry for a thriller. As you might expect, Cairo is expertly realised (it is as convincing as the setting in Olivia Manning's Levant trilogy, set in the same place at the same time and written by one who was there), and the background details show the research to have been thorough. Cairo, the city of gold, is a corrupt place in the period, and now it is a frightened one, and so the novel is filled with examples of the sordid side of human nature; Deighton keeps this entertaining rather than depressing.

City of Gold is the best of Deighton's nineties novels, the only one to really score near his classics of earlier decades. Thirty years on from The Ipcress File, Deighton was probably not really thinking about gaining new fans and there is little that is new here; but it is far more successful than MAMista, the only one of his late novels which could be described as innovative.

I can heartily recommend City of Gold to anyone who enjoys war stories; it also makes it clear that Alan Furst has turned out to be Deighton's natural successor in this field.
Posted by Simon McLeish at 16:18 No comments: