John Wyndham: The Trouble with Lichen (1960) 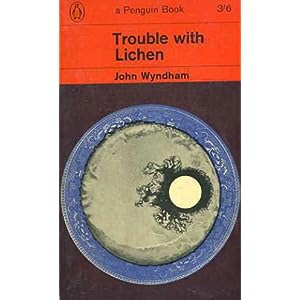 John Wyndham's most famous books, The Day of the Triffids and The Midwich Cuckoos (filmed as Village of the Damned) are fairly serious stories of disasters, a theme also followed in The Kraken Wakes. The Trouble with Lichen, a later novel, is not quite in the same line, being an examination of the negative social consequences of a scientific discovery which initially seems to be a great boon to the human race. There is also a fair amount of arch and faintly satirical humour, more apparent here than in the earlier novels (even if touches of it can be discerned).

The central characters of The Trouble with Lichen are two biochemists, newly graduated Diana Brackley and the head of the research company at which she finds work, Francis Saxover. While working on a collection of lichen samples from an expedition to the Far East, Diana serendipitously discovers that one of the samples prevents milk from turning, in a narrative directly lifted from the story of Alexander Fleming's discovery of penicillin. She and Francis work on this independently, and discover that the lichen does not in fact contain the expected antibiotic agent, but instead acts to slow down the aging process, acting well enough to give a human being a life expectancy of maybe 200 years.

The problems, when they think them through, turn out to be many and complex. Firstly, the lichen is only found in one small area, so the supply is extremely limited, only enough to treat around a thousand people. Then there are the social issues: what happens when there is no "natural wastage" to speak of, so that two hundred years of active life will be spent in a job which is a dead end, as the senior people will effectively never retire? Or when there is no chance of inheritance, or when the world becomes overcrowded?

Some of these problems are much more in the air than they were in the early sixties, as populations age (especially in the West) and the number of people in the world reaches seven billion (from about three billion when the The Trouble with Lichen was published). As a science fictional exploration of the issues, it is as relevant now as it was in 1960, if not more so. Many countries are reacting to these problems now - by redefining what retirement means and when it starts, for example. But in The Trouble with Lichen this is emphasised rather less than some of the other issues, and it is the over-arching theme of the double-edged nature of scientific and technical advances which really resonates today, in the age of global warming.

Wyndham starts with a prologue describing Diana's funeral, so the reader knows that the novel will not all be cheerful, but he ends on a positive note, as his novels usually do. Like many science fiction writers of his generation, he seems to have been convinced that human ingenuity will be able to solve any problem, even ones which have been caused through science and technology. As in, say, The Day of the Triffids, the upbeat nature of the ending is dependent on hard work over many years, and Wyndham is unable or unwilling to suggest solutions to many of the problems he raises. They are hard issues, so this is not particularly surprising; nor is it necessarily a bad thing, as ideas produced by science fiction writers over fifty years ago are quite likely to seem naive in 2011, no matter how seriously intended at the time.

Of Wyndham's novels, this is the only one which I can recall as having a major female character who is not basically a wife and companion to the man who is the main centre of attention. This is probably more because the nature of the discovery lends itself to the idea of the use of the beauty industry to exploit but at the same time hide the discovery of the properties of the lichen than from any conversion to feminism by the author. After all, the campaign she mounts after the lichen becomes public knowledge is based on the use of her clients as the wives of important figures, rather than on any importance they might hold in their own right. The UK in 2011 may still have a male dominated establishment (just look at the Cabinet, or the board of any large bank), but I think that today's reader would probably expect some at least of these women to have important careers of their own, rather than having no role other than that of wife and mother.

Old fashioned, but still in many ways relevant; well written with touches of humour, The Trouble with Lichen is an excellent novel which deserves to be as well known as Wyndham's most famous works - 8/10. On the surface, this should be a fascinating book for amateurs interested in history, looking at a large number of historical controversies and misrepresentations and deciding how they could, or should, be resolved. It sounds as though it is intended to be a historical equivalent of John Sutherland's excellent series of books about conundrums in literature, which have titles like Where Was Rebecca Shot?. Rayner and Stapley are in a similarly authoritative position in their subject to Sutherland's in literary criticism, so, like him, they ought to know what they are talking about.

In practice, though, much of the content fails to live up to the title's billing, in several different ways. Firstly, the scope of the "history" covered is very much modern, starting with the American Revolution and ending with the question of the existence of weapons of mass destruction in Iraq, with a particular focus on the United States and on the Second World War. This is not unreasonable, though, as it will be difficult to discover the truth about controversies further back in the past, before the bureaucratic and obsessively documenting modern state really got going. Where medieval political documents are violently biased on many questions (depending quite often whether the writer was a churchman or not), it is likely to be virtually impossible to establish the truth of any controversy such as the impact of the Norman Conquest on the English peasantry. So it is an understandable restriction to use to decide which material can be usefully covered, but it doesn't justify the title.

And, too, few of the articles can be categorised as "popular myths exploded"; a more accurate description would be "interesting questions dismissed in a cavalier fashion without proper discussion". I suspect that there will be few readers who already have an opinion on even 50% of the issues discussed in the book, making popular a misnomer (does the average person-interested-in-history care whether the Speenhamland System should really be considered a system or not?).

Almost all of their discussions are excessively brief, some just one or two paragraphs in length, which hardly gives enough space to describe the issue and declare what the authors' opinions about it are, without giving much supporting evidence. It is no surprise that this means that the discussions frequently come over as glib and apparently partisan. Many of the 152 items could have (and often have had) whole books written about them - from the incompetence or otherwise of First World War generals to the final verdict on Nixon's presidency; to attempt to summarise the causes and the nature of the Chinese Cultural Revolution in just two pages is more arrogant than useful. The brevity makes the discussions more like dogmatic rhetoric, surely not very satisfying to the type of reader likely to pick up this book. In some cases, the initial description of the issue pre-supposes or states the conclusion which will be reached - neither very honest nor what would be expected of authorities in the field. It is not very interesting to be presented with an interesting conundrum, only to be told that the expected viewpoint is wrong (or right) without any real hint as to why that might be so.

The short essays are variable in quality too. Despite the authors' years of experience, some read as though they were written by a poor A-level student with access to Wikipedia and a short attention span. The topics covered are interesting, and that keeps the reader going, but anyone with a real interest in history would be better advised to look out more detailed coverage of the topics they find most fascinating. Comparison with John Sutherland's discussions which are mostly about 10 pages in length or so shows how much better more room makes the discussions. The best part of this book is the five page bibliography at the back, but even that is really just a list of fairly general books on the major subject areas covered by the 152 articles. Even there, though, I would have preferred a book or two pointed to from every article, even if that required a fair amount of repetition, as the general books listed at the back will be unlikely to cover all the relevant questions in any detail.

A serious issue is shown up by the way that, without even seriously trying, I picked up factual errors or misrepresentations. On the question of whether Marconi himself invented one of the key components of a radio or stole someone else's design, the Proceedings of the Royal Society (in which a design almost identical to Marconi's own had appeared a few years earlier), is described as "obscure"; while not as prestigious as the Philosophical Transactions, it is hard to see how any publication of the Royal Society can be considered obscure. This may be a matter of detail, but it is important to their argument for exonerating Marconi, who I suspect had read the article but did not consciously remember it when he was working on his prototype radio equipment.

The best chapters as far as I was concerned were the ones I knew least about already, such as the one on British influence on the formation of the Monroe doctrine by the United States government. I suspect that this is really a reflection of the superficiality of most of the coverage, as this is more noticeable to a reader in those topics which they already know about. Best, to me, then, were the articles about American history, of which there are a surprisingly large number for a book publishd in the United Kingdom. The coverage of World War II, a topic which I know better, is also pretty good, though more expected in a country where public library's history sections seem to be over half concerned with the six years 1939-1945.

Basically, I feel that I wasted my time in reading Debuking History, which I felt was pretty much the reference book equivalent of sitting down to watch The Phantom Menace (I never got to the end of Attack of the Clones and didn't bother even starting the third film). My rating - 3/10.