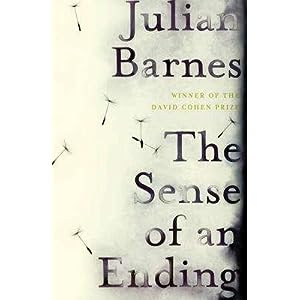 When The Sense of an Ending won the Man Booker Prize last year, I remember seeing a suggestion that this was more a belated recognition of Barnes' career than an award which was deserved by this specific novel. Length aside, I don't think that this is the case, as the The Sense of an Ending is an immensely enjoyable yet deeply felt novel which reminds me of the early works which I like best out of Barnes' output.

The Sense of an Ending tells of a school friendship, following by a gradual growing apart while the friends are at different universities and an end with the suicide of one of the young men. Then, in the second part, the survivor has the past brought back to life decades later when he is unexpectedly left a legacy, which includes the diary of the dead man. And so the narrator. now in his sixties, looks back on the events of his teens and his early twenties.

So this is a novel about friendship, memory, and death. But although it addresses these potentially weighty themes, it is often funny, especially in the first section, which is set at the school. A lot of this section prepares the way for the rest of the book, as when, for example, the boys are made to discuss the nature of history by their teacher, an anecdote which is also used to suggest that the narrator of the novel is not entirely reliable: he ends up deciding that history is the story told by the survivors, rather than, as is usually suggested, by the victors. The Sense of an Ending is about "closure", hence the title, but it also has a satisfying and somewhat unexpected ending itself.

The problem with The Sense of an Ending is how short it is, especially by modern standards. I can think of several acknowledged masterpieces - oddly, mainly French - which are no longer but 150 pages is very short in these days of word processors. However, the important thing to realise is that this story seems to fit the length (which is more a tribute to Barnes' craftsmanship than something innate to the plot ideas). There are no wasted words, and no feeling that there are elements which should be in the book but are missing - even though there is a gap of forty years between Parts One and Two. A longer version of the novel would clearly be possible, but would lack the focus which Barnes is able to bring to his chosen subject by his concentrated treatment of it.

Barnes is a writer who I've read and enjoyed sporadically over the years, and this is in my opinion one of his best - 9/10.
Posted by Simon McLeish at 18:55 No comments: 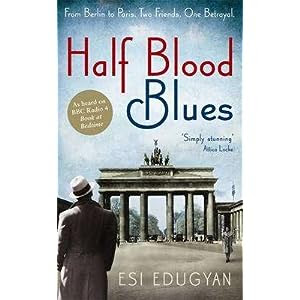 The treatment of Jews by the Nazis during the Second World War is well known (even if a small minority of people claim that the Holocaust did not happen), but the knowledge that similar efforts were made to destroy other groups (such as gypsies and homosexuals) is less widespread. This novel is the story of three black men, jazz musicians, in Germany and then France as the war broke out and France was occupied. Jazz music was banned as degenerate by the Nazis, which makes them even worse in the eyes of the German state and its functionaries, One of the musicians, trumpeter Hiero, is actually German by nationality, so is even more unwelcome in the land of his birth. He is unable to get travel papers as easily as the others, who are Americans, and they end up making a recording named Half Blood Blues in a tiny studio in Paris, which, when discovered after the war, is acclaimed as a classic, along with Hiero being regarded as a jazz great tragically lost when he is arrested and taken to the concentration camps shortly after the session.

Half Blood Blues was nominated for the 2011 Man Booker Prize, but failed to win. Neither is a surprise to me. The novel has some truly brilliant writing, but my interest flagged in the middle. The background of wartime Europe is less interesting than the sections about jazz, and what it feels like to be a jazz musician is far more enthralling than the plot.

Although jazz has never been music which really spoke to me - I keep on trying, to see if I can pick up what others love about it so much - I have done a fair amount of musical improvisation. I can't claim to be very gifted at it, but on occasion it has just clicked, and when this happens while playing with others also "in the groove", it produces a euphoric feeling which is like no other I have ever felt and which I can never forget even though I rarely play now and never perform any more. In her descriptions of the session when the main characters jam with Louis Armstrong and in the Half Blood Blues session itself, Edugyan comes close to expressing that feeling in prose, and then goes on to nail the draining numbness and despair which comes to those who (unlike me) have been able to touch a vein of inspiration frequently enough to become professionals when they are unable to perform as well as they want: a feeling probably at the source of at least some of the drug habits which have plagued many famous jazz musicians.

It is the wartime aspects of the novel - the terrible choices which must be made, the lost companions, the betrayals - which work less well. However gifted Edugyan is at bring the experience of music making alive for the reader, she does not appear to be a thriller writer. The slackness of this side of the novel is why the middle parts drag.

While tempted to give a higher rating to this novel for the brilliance of its evocation of performance, I don't really think that Half Blood Blues can be rated higher than 6/10 overall.
Posted by Simon McLeish at 12:12 No comments: