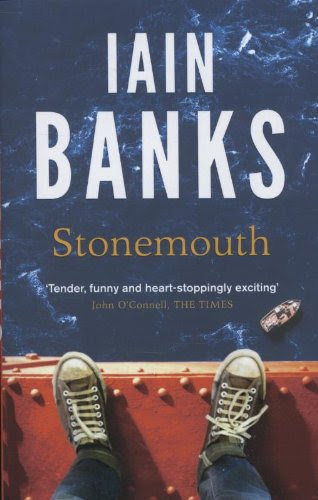 Stewart Gilmour returns to his home town of Stonemouth after years away, following an event which earned him the enmity of the closest that a small town north of Aberdeen has to a gangster family. He has been granted permission to return for a funeral, but do all the family members know (or care) about this? What about the other relationships which were affected by what he did - how will other people react when he returns?

Like many Banks novels, Stonemouth is told with multiple timelines presented simultaneously, though it is one of the simplest versions of this, as Stewart's current visit has his past life in the town interleaved as a series of flashbacks. This is why I've been careful not to say precisely what the event was which led to him being exiled, even though most readers are likely to have guessed well before it is revealed. The biggest problem with this sort of thing is usually that the secret to be revealed near the end of the novel is well known to all the characters throughout, and in the hands of lesser writers leads to some awkward dialogue, as people steer clear from what they would naturally say so that the author doesn't reveal his secret to the readers.

The bridge over the Stoun is an important part of Stonemouth, and bridges have played major roles in Banks' novels before now - obviously in The Bridge, but also in Canal Dreams, where the Panama Canal is like an inverse bridge joining two oceans together across the intervening land. The function of a bridge (or canal) is to connect two things otherwise unconnected, but in the earlier novels the action takes place on the structure itself, which places the characters in a kind of limbo. Here, though, the purpose of the bridge is to act as a transition from one world to another, whether through death (much is made of the bridge as a jumping off place for suicides) or by overcoming the separation between the two sides of Stewart's life. In the outside world, he is successful, and works at a job which brings light to the world, in a literal sense. In Stonemouth, he is a former insider who is now separated from the townspeople by his actions many years ago. So the bridge links to his past, to another world he has been forced to abjure, away from the light. That the gangsters in the town appear to be powerless outside it (they tried to track him down in London) is part of this. Is the novel itself some kind of metaphor for growing up? For leaving the past behind? Or is it even a suggestion that Stewart didn't survive to live his own life, but, like the suicides, crossed the bridge to death?

As well as avoiding the obvious pitfalls, Banks does a good job of winding up the tension until the denouement. Stonemouth is a literary novel structured like a thriller - Banks has always written novels which at the very least flirt with genre fiction, and this is no exception.

The characters are well drawn, the plot is believable, and the background is convincing. So why did I end up feeling that this was not Banks at his absolute best? It's partly that this has been done before by Banks; the prodigal son returning to his roots is the basis of several of his novels, with differences mainly deriving from the nature of the welcome expected. Stonemouth has a particularly stony reception for the returnee, which is perhaps one reason for the name of the town and the title of the novel. The Scottish setting, too, is common to most of Banks' non-genre fiction - superbly well done, but not breaking any new ground. The other problem I had here is that, to me, the characters fail to take off, apart from Stewart, and he himself is pretty similar to other narrators - notably Prentice McHoan in The Crow Road. So it's a good book, but not top class - my rating, 8/10.

Posted by Simon McLeish at 07:56 No comments: