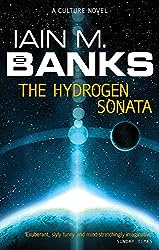 The Hydrogen Sonata is the final Culture novel. It is tempting to see some synergy in the themes explored in the story with this fact, for it is about beginnings and endings. However, this is not the case: the rise and fall of civilisations is a theme common across the Culture series, and in the brief author interview included at the end of The Hydrogen Sonata, Iain Banks states that he had another novel's worth of Culture ideas (and that this was usual at the end of writing one).

The Gzilt race is of interest to the Culture (more than usual - the Culture is perhaps characterisable by its rampant nosiness) because they were involved in the discussions which led to the Culture's foundation, but decided not to join. They are now planning to Sublime, to move out of what is considered the real universe into a fairly vaguely defined afterlife for scientifically advanced alien races - something of a cross between a humanist afterlife/Nirvana complete with a rapture event and an inaccessible retirement home (the details are unknown even to the most powerful Culture Minds). However, there are rumours of a secret from the very earliest days of the Gzilt race, one which might cause sufficient unease that its members might not be able to sublime, and this is something the Minds can look into.

I felt that parts of the plot didn't quite hang together; much of it is concerned with the search for someone who was around in the early days of the Culture and is still alive, who can be asked about the secret (which was known to those involved in the discussions out of which the Culture was born. It really felt to me like there was a lot of fuss being made about quite a minor issue. The details of the story are interesting and entertaining enough that this doesn't seem to matter too much, but the central motivation of the plot is lacking. Like several other of Iain Banks' later novels, The Hydrogen Sonata lacks something of the ambition of his early work.

As I said, the interest is maintained in the small scale details in the plot, and this is one of Banks' most overtly humorous novels. I particularly liked the insect-like aliens, the Ronte, whose fleets of starships engage in ceremonial dances - an idea which somehow manages to combine the alien with the familiar in a way which is really one of the distinguishing features of good space fiction. It also makes The Hydrogen Sonata an entertaining read, among Banks' lightest novels. I enjoyed reading it a lot (more than some of the other Culture novels) - my personal rating is 8/10.
Posted by Simon McLeish at 18:39 1 comment: