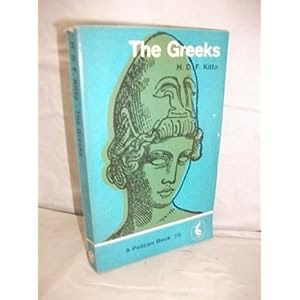 The Greeks has long been touted as the best basic introduction to the culture of ancient Greece, where the foundations for much of the way we think and live today were laid but which still can seem strangely alien from a viewpoint two and a half millennia years later. Now over sixty years old, is it still worth reading?

Clearly, the book itself has not changed in any way (especially as mine is quite an elderly copy). It remains an excellent basic description of ancient Greece, concentrating on the aspects of the culture which are especially influential. Kitto is occasionally self-indulgent, getting carried away by his love of the literature, as when he translates large portions of the first book of the Iliad which are not directly relevant to the aims of the book (though it does illuminate aspects of the culture almost in the way that a lengthy Bible quote would shed light on Western culture, or a section from the Koran would on Arab thought). My background (growing up with a parent who had not just studied classics, but who wrote books about Greece and Rome alongside translations of ancient texts) does not make me an ideal test for the use of The Greeks as an introduction, but from what I can see it does seem to do the job it sets out to do.

One thing which has certainly changed is the correctness of the assumptions Kitto makes about how much of Greek culture is already known to the general reader. Kitto assumes a certain amount of knowledge in his readers, and in the 1950s he would have been able to assume more than would be the case today; after all, most British schools still taught at least Latin in those days, and hardly any do so today. This has two consequences: the number of people who have any idea that the book might be interesting to them is smaller, and the likelihood is that they will find it far harder to understand. On the other hand, web sites like Wikipedia will fulfil many of the needs which The Greeks was intended to, so it is not as useful as it once was. 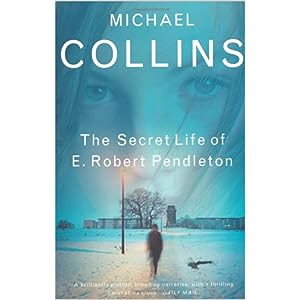 Campus novels are not uncommon; novels about writers even less so. But Michael Collins has here produced an excellent novel, by incorporating a striking crime thriller theme into this self-consciously literary setting.

The title character is a literature professor at Bannockburn College, a once-famous writer whose punk-like attitude helped bring about a decline in his career to the point where a meeting with an old friend who is still a best-selling author drives him to a suicide attempt. While he remains near death, a postgraduate student from the English department discovers a lost novel in his home, published decades ago by a now defunct vanity press and apparently so thoroughly forgotten that it no longer appears on Pendleton's CV. Intrigued, Abi begins to read it, and is impressed by what turns out to be a first person narrative daringly written from the point of view of a child killer. She eventually manages to get Scream published, and it becomes a best-seller as well as restoring Pendleton's literary reputation. But then a few people begin to realise that the crime depicted bears a close resemblance to a real cold case from local area.

Considered as a crime thriller, The Secret Life of E. Robert Pendleton moves at a glacially slow pace. It will, however, retain the interest of a genre fan because of the idea behind the plot. The extra space is used to include elements from literary fiction, particularly to develop the characterisation of Abi. The themes of the novel seem to be the way that bad choices come back to haunt us, and the relationship between fiction and reality - does Pendleton's depiction of the crime in Scream make him the criminal, someone who spoke to the criminal, or someone with a imagination unfortunately too close to that of the killer?

A touch of patience from thriller fans will be well rewarded. There are some fantasic scenes, such as the interrogation of another author and academic by the police, where he deconstructs the questions as though they are texts relating to an academic study of the philosophy of crime genre fiction.

All the main characters in The Secret Life are failures of one sort or another, at least in their own eyes, and are generally not at all reconciled to being so. There is the perennial student, the once fêted writer who cannot maintain his early promise, the writer who pursued commercial success and despises himself for it, the policeman unsatisfied by his second marriage, not to mention the people originally suspected of the murder, none of whom have done anything with their lives. They are not particularly likeable, either, which is something which usually makes it harder for me to enjoy a book; but this time, it did not, because of the interest of the idea and the complexity of the characters (who do at least have sympathetic traits as well).

The title is one of the poorest parts of The Secret Life of E. Robert Pendleton, being long, awkward, and unmemorable, as well as saying little about the themes of the novel. It has also been published as Death of a Writer, which is misleading and not very good either. A couple of minutes' thought suggested A Murder in Fiction, but I think that with only a modicum of effort, this too could be bettered.