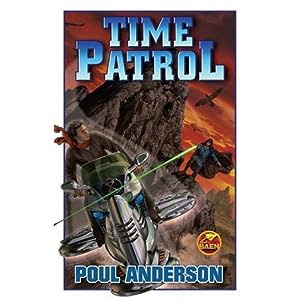 The Time Patrol stories of Poul Anderson are classics of the science fiction genre, dealing with the efforts of the eponymous group to maintain the status quo of history against the accidental or deliberate manipulations of other time travellers. This book, sharing the name of the original story which began the series, collects them all (and it is not to be confused with an earlier volume, also called Time Patrol, which contains only the first two or three stories).

The central character in the stories is Time Patrol agent Manse Everard, who is "unattached" - basically, a troubleshooter who can visit any time and place in order to sort out serious problems. (Most Time Patrol agents work in a single milieu, either as researchers studying the period or as officials regulating the activities of time travellers.) Apart from the first story, which is about Everard's recruitment, the basic plot of the remaining stories is simple and consistent: some problem requires Everard's intervention at a particular time and date.

Though the stories were written over a period of five decades and though they vary wildly in length (between about 30 and 160 pages, as reprinted here), they are very similar to each other. Anderson doesn't quite make the different periods and locations all that distinct (though having several stories set just outside the borders of the Roman Empire doesn't really help with this). Everard also remains pretty much the same through the series, maybe a little more world-weary, but basically an action hero. Like many long running series of self-contained stories, the Time Patrol tales work better in relatively small doses rather than by reading them all the way through in one volume.

Given these obvious flaws, why is Time Patrol worth reading, and why are the stories important in the development of the genre? For one thing, there is one story in the series which really stands out, which would be a classic of the genre even without the rest. Delenda Est has Everard returning from a vacation on a base in the prehistoric past to his own time (the mid twentieth century) only to discover that everything has changed. In what is effectively a parallel world, he has to work out what pivotal event has been altered, and then decide if he is morally able to destroy an entire new civilization in order to bring back his own familiar time line (or alternatively destroy the lives of all those living in his own timeline to save the new future). This single story is one of the best of all those ever written about time travel.

For the other stories, the point of this series is really the introduction of adventure to time travel, and particularly to stories involving time travel paradoxes. The fates of nations, of the godlike Danellians from Earth's far future (the beings who set up the patrol to preserve their existence) rest on Everard's capable shoulders: he is a hero who can think as well as act. In the original time travel story, Wells' The Time Machine, the use of time travel is to be a mechanism allowing the main character to see the far future (which is, of course, at least partly a reflection on Wells' present); the machine itself has very little part to play in the story. It is like the visions in The House on the Borderland, or the mental link to the future in Last and First Men: the point is the vision itself, not the mechanism by which it becomes available to the protagonist. Stories of time travel to the future tend to be like this in tone, and it is perhaps the introduction of the possibility of paradox with travel to the past which makes the idea work better as the background of a thriller. (The actual introduction of the famous grandfather paradox came as late as 1947, and even then in stories unlikely to be read by the mainstream English language science fiction fan: French genre fiction, with the exception of Jules Verne, is still considered pretty obscure.) Anderson joined other American writers of his time such as Robert Heinlein and Isaac Asimov in bringing adventure to mainstream time travel fiction (The Door Into Summer and The End of Eternity are approximately contemporary with the earliest Time Patrol stories); Anderson's stories are the most epic of these as adventures.

Delenda Est is a must read for any science fiction fan. The rest are interesting in small enough doses, though a bit too similar to each other to make the omnibus a pleasure. So I would recommend seeking out other collections which contain one or more of the stories along with others, rather than investing in the omnibus.
Posted by Simon McLeish at 11:26 No comments: