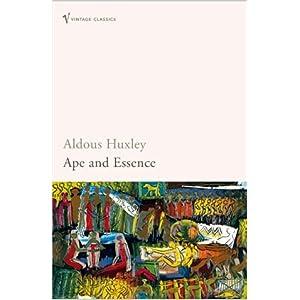 When I came across Ape and Essence in the local library, I was surprised. I like Huxley, and I have read a lot of science fiction, but here was a science fiction novel by Huxley I'd never heard of before, let alone read.

On reading it, the reason that Ape and Essence is comparatively obscure is pretty clear. It is, firstly, not a conventional novel. It purports to be a short description of the discovery of a film script in a Hollywood studio's reject file, followed by the script in question. Huxley himself worked in Hollywood as a script writer, unsuccessfully: the story, retold in David Bradshaw's short biography printed as the introduction to this edition, is that Walt Disney rejected a synopsis of Alice in Wonderland, explaining that he "could only understand every third word". The pairing of Disney and Huxley is incongruous in itself, without wondering what the eventual author of Doors of Perception might have made of Lewis Carroll - and what the children who watched a Disney cartoon using the script would have thought of the result. On the basis of the screenplay incorporated in this book, it would not have been one of the studio's greatest successes.

Ape and Essence, the screenplay, is a post-apocalyptic story, set in a devastated Los Angeles in 2108, decades after a nuclear war, on the occasion of the landing there of an exploratory mission from New Zealand, which was isolated enough to escape destruction. The savages who now inhabit the ruined city interpret the war as the time when Satan took control of the earth, and they are first encountered looting the graves in an exclusive cemetery. Their purpose in the story is almost too clearly satirical: there is no real subtlety here. The theology of the savages, who are portrayed at one point performing a ritual in praise of Satan, is something which would probably provoke protests even today if a film were ever made of this script.

Controversial material is not the only problem with Ape and Essence. The script has a large role for an off-screen narrator, who is very pretentious, almost to the point of parody, drawing conclusions about how the real events of 1948 lead into the world depicted as its future. The voice is similar to the best-skipped introductory essays which George Bernard Shaw added to many of his plays, especially that in Back to Methuselah, which also depicts the future of humanity. The narrator is irritating even in the script; in a cinema I think it would be unbearable, and makes me wonder whether Huxley had been to any films since sound came in. There's also a kind of masque forming the first section of the screenplay, a symbolic drama featuring baboons and multiple Albert Einsteins which is very dated, and might well have seemed so in 1948, even though its subject matter is firmly post-Hiroshima.

The title is picked up in the body of the script, most clearly on p. 55: "Only in the knowledge of his own Essence has any man ceased to be many monkeys." Huxley's point in Ape and Essence is to discuss the relationship between the bestial and civilised parts of human nature, and what he wants the reader to pick up is that it is only by understanding that he or she has a bestial side that it is possible to have any hope of overcoming it. It is a potentially pessimistic point of view, and motivates a thoroughly pessimistic tale. There are some good lines in the story, but generally, anything of interest in Ape and Essence has already been said better in Brave New World. My rating: 4/10.
Posted by Simon McLeish at 18:09 No comments: