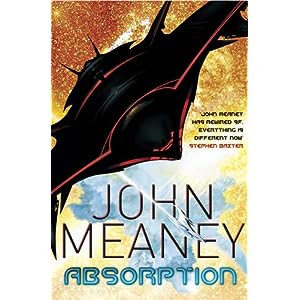 When does hype become unbelievable? John Meaney, according to Stephen Baxter (as quoted on the cover of Absorption), "has rewired SF. Everything is different now".  Absorption also had nothing but five star reviews on Amazon at the time of writing. So this is a book which should be spectacularly good: this is the sort of praise associated with classics of the genre such as Neuromancer. In Absorption's case, the hype is somewhat at odds as the rather pulp style cover, which suggests that the contents will be more E.E. "Doc" Smith than William Gibson. It's a lazy piece of design which will hardly do the book any favours, no matter how good it is.

Absorption is a fragmented narrative, with chapters concentrating on characters from the eighth century AD to the twenty seventh. These are people living more or less normal lives, for their times, until they discover something which they have in common and they are mysteriously brought together. It's quite slow, and it takes about 150 pages for the reader to find out anything about what it is, which makes the story quite an unfocused read. I suspect that anyone who isn't a fan of the genre will give up fairly quickly and consider Absorption incomprehensible and boring (it is certainly rather slow moving in places, and the fragmentation doesn't help Meaney move things along). It does eventually make more sense, though it is clear that there will still be unanswered questions right to the end: this is, after all, volume one of a trilogy. However, I don't think that Meaney chooses the best way to reveal information; stories in which everything seems to be revealed only for deeper secrets to become apparent work better for me than ones in which we keep on being told that there are secrets, but details are revealed extremely slowly: much of Absorption seems to tantalise for the sake of it, and this is irritating as well as dull.

Another aspect which is surprising, given the description by Steven Baxter, is just how much is owed to older genre classics. There is some distinctly Heinleinesque banter in places, while the use of the name Jed for one of the characters makes it particularly easy to pick up Star Wars similarities, which (perhaps unfortunately) are mainly apparent in the dialogue. The main feature of Absorption which is derivative is the plot, which is basically a "superheroes-discover-their-powers" one, with the twist that the group of superheroes is separated by time and distance. The elements of the novel have appeared before in the genre, and have been better done; however, I can't think of any other book which combines these ideas in this way, so there is at least originality in that.

Most of what I have said suggests that I didn't like Absorption. I found it hard to get into, enjoyed the middle, and was frustrated by the ending. I object more to the way it has been over-hyped than to the book itself. I might go on to read Meaney's earlier books, but I don't think I'll bother with the rest of the trilogy. Interesting, more or less readable; but not especially significant and certainly not worthy of the praise it has garnered, is my verdict. My rating: 5/10. 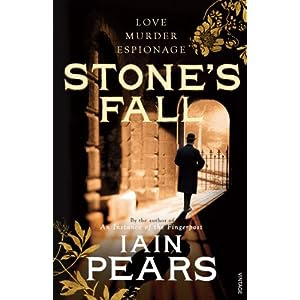 Iain Pears has to be one of my favourite crime authors. The magnificent An Instance of the Fingerpost is an incredible historical thriller, with three different solutions to the mystery being presented by different narrators, while the Jonathan Argyll series is an entertaining and amusing romp through the Italian art world. The two are very different sides to Pears' talent, and his newest novel, Stone's Fall is cut from the same cloth as An Instance of the Fingerpost.

Indeed, it uses quite a lot of the same structure. Stone's Fall is divided into three main parts, with a short introduction; they are arranged in reverse historical order. All are concerned with Edwardian financier John Stone, whose death falling from a window prompts his widow to employ a young journalist (Matthew Braddock) to investigate the strange bequest in his will to a child that neither she nor the will's executor knew existed, under the guise of researching an autobiography of Stone. The investigation becomes entangled with the finances of the companies owned by Stone, which are mainly armaments firms, with international politics, and with Braddocks infatuation with Stone's widow. He does eventually find a solution which convinces him, but that is only the end of the first part.

In the second part, we go back thirty years, and the narrator is now Henry Cort, a spy from the first part, now at the beginning of his career in Paris in the years after the Franco-Prussian war. This again involves Stone's (future) wife, and a plot to destabilise the Bank of England by discrediting Barings Bank, one of the biggest Victorian investment banks. This sheds further light on the personalities involved in the first part, and suggests that the convenient solution for Stone's death may not actually be correct. The narrator of the final part is Stone himself, as a young man in Venice in the 1860s; characters include Cort's father. Here we find out the origins of Stone's fortune - Braddock had wondered how someone without the training of an engineer had been able to set up a company to produce a revolutionary torpedo from a design he provided. And, again, new light is shed on Stone's death; he wrote the memoir just before his fall.

I did feel that the re-use of the tripartite structure, with a similar purpose to that in An Instance of the Fingerpost, reduced its impact. On the other hand, Agatha Christie finishes many of her novels with scenes where Poirot confronts the murder suspects as a group, and these scenes are so similar they almost follow the same script as each other (Poirot describes the evidence against someone innocent, they protest, Poirot agrees and skewers the real killer). That is not the case here; Stone's Fall is a very different thriller from An Instance of the Fingerpost, not just because it has a later historical setting. It just seems a repeat because of the striking nature of the concept. While in Pears' earlier novel, it seems as though the use of the device is making the point that it is possible to come up with multiple solutions as convincing as those most crime novels have, here his little reminder to the genre is that the kind of clear cut solution common in murder fiction are not the way that things really are; the truth behind most killings is more complex than just who did what when, and it can be the case that the roots of the death of a man like Stone could run many years back into the past. It is perhaps fair to say that Stone's Fall is concerned with emotional depth, while An Instance of the Fingerpost is about glittering cleverness. But in the end, the earlier novel was always clearly destined to be a classic of the genre, while Stone's Fall is just very good indeed. My rating: 8/10.