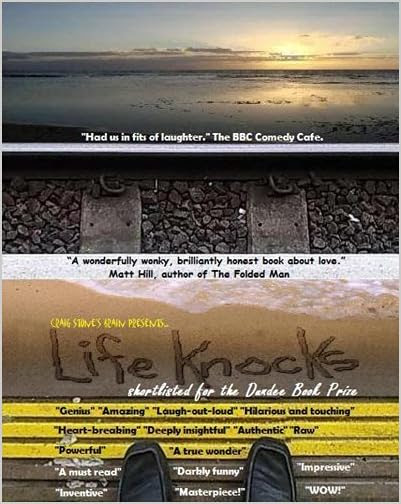 I wasn't sure whether I would like Life Knocks or not before starting to read it, and I am still not sure.

The narrator, named Colossus, is at a low point in his life. He is living in a low quality bedsit, unable to connect with anyone he meets, with the exception of his unpleasant landlord (who is a Muslim version of Riggsby from seventies sitcom Rising Damp, with even less charm and fewer redeeming qualities.

This life forms one of two interwoven narrative streams, being labelled Present whenever it occurs. The other, labelled Past, describes an idyllic affair with a woman named Lily, and how Colossus basically this part of his life away. Lily is the only truly sympathetic character in the novel. The separate narratives work very well, and make Life Knocks read rather like an Iain Banks novel, Dead Air being the one which sprang to mind,, though without some of his quirkiness.

It is clear, even only from the quotations on the cover image, that Life Knocks is a novel which many of its readers find extremely funny. The humour here did not really appeal to me (which is one reason why I am not sure I liked the novel as a whole). Basically, it consists of watching Colussus finding more and more ways to mess things up - something which I found more excruciating than funny. But tastes differ...

Perhaps I invested more in the character than other readers have done, and so found his mistakes unbearable, but the fact that I did so was a tribute to the quality of Stone's writing. It is really easy to enter into the world in which Colossus lives, in both phases of his life. That is part of the problem - I didn't want bad things to happen.

In the end, I would say that I admired Life Knocks a lot more than I enjoyed reading it. If this kind of humour is your kind of thing, you will love it; if not, you will probably react much as I did. My rating - 6/10.
Posted by Simon McLeish at 07:43 No comments: