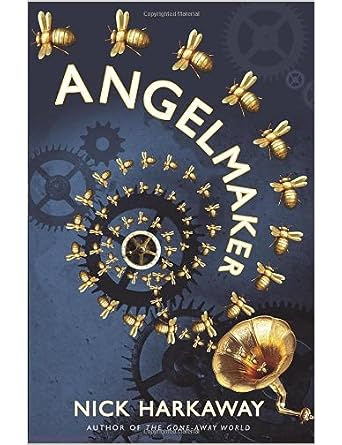 Harkaway's first book, The Gone-Away World, is one of my favourite new novels of the last few years, so I have been eagerly waiting to read his second, Angelmaker.

The central character, Joe Spork,  is a craftsman who works on clockwork mechanisms, deliberately following in the footsteps of his grandfather rather than his father, an East End gangster. But when he is asked to repair an enigmatic device, he draws the attention of a shady government agency as he races to prevent the use of a doomsday weapon.

There are, unsurprisingly, many similarities between Angelmaker and The Gone-Away World. The style is the same, the frenetic pop culture tropes are used as effectively. Here, the references include such things as Kim, sixties London gangsterism, a hidden London which most inhabitants never see (Neverwhere without the fantasy elements - including a market held near HMS Belfast), and so on. Like Angelmaker, it reminded me strongly of Thomas Pynchon, though perhaps in this case Vineland is a closer fit than Gravity's Rainbow. It's lighter, with more concentration on the humour, but is certainly no less enjoyable.

This type of wildly whimsical storytelling always appeals to me, but if it isn't your cup of tea, you are unlikely to enjoy Angelmakeras much as I did. And since the cleverness of the silly side to the book is such an important part of it, it's probably not worth picking up if that is so. But to those of us who do like this, Nick Harkaway's second novel is as much a treat as his first. My rating: 9/10.
Posted by Simon McLeish at 07:34 No comments: