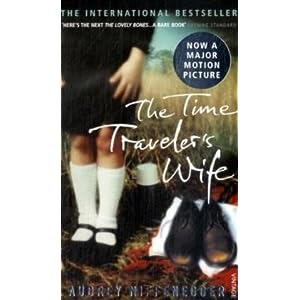 A remarkable idea is the focal point of this novel, which I am reading for the first time even though it has been around for ages. There have been thousands of stories about the development of relationships, but here there is a unique twist: one of the people involved is an involuntary time traveller, who suddenly materialises years away from his starting point when stressed.

This brings a whole new level of interest to what might otherwise have just been a run of the mill modern novel. In most relationships, the way they develop is that both parties get to know the other at about the same rate, but for Clare and Henry, this doesn't work. Clare is a child when she first meets Henry, a naked adult man in the garden of her home; he already knows her (and even has a list in a notebook of the dates when they will meet - compiled from a list she gave him years later). When Henry first (from his point of view) meets Clare, she is in her twenties and has known him at various ages for many years; he is almost like an imaginary friend who turns out to be real. So both of them have to find out about someone who already knows them well. This would alone be enough to make the story of the relationship different from almost any in fiction; the closest would be where one of the two people involved is some kind of celebrity whose life is at least on the surface well known to the other (and I can't even think immediately of an example, though I am sure there will be many).

The Time Traveler's Wife is very carefully put together so as not to be too confusing for the reader. I suspect that the writing of the novel involved complicated charts showing the different timelines, with lots of crossing out. Each section has two important cues to help the reader: at the top, the date, and the ages of the Clare and Henry in the section, and then an indication of whose point of view is being used. The story almost always follows Clare's timeline, though certain significant events appear at other points - the last meeting listed in Clare's notebook, before they meet in real time, for example. Since the time travel motif dominates the story, this is needed to make the complex tangled relationship make sense.

It is easy to see why Niffenegger's debut is marketed as general fiction rather than as science fiction - it is about the relationship, not about the mechanics of time travel. But it does share many of the trappings of the genre, not least an interest in what is known as the "grandfather paradox": what happens if the time traveller changes the past in a way which affects his future self (the name coming from the idea of him travelling back and murdering his grandfather, making his birth and the travel and the murder impossible). Henry thinks that the future is fixed, that there is no way to meddle with it; the only time Clare tries to make changes, she backs out before it would become an issue (she writes the date on a drawing that in the future Henry knows is undated; but snips the date off later so that it matches the picture as Henry remembers it). The possibility of changing the future is discussed many times, but never acted upon. This is perhaps the most common sense solution to the grandfather paradox, though it does have tough implications about free will, which is only apparent not actual. Of course, characters in a story do not have free will, but are driven by their author.

I wondered for awhile whether the time travel idea in this novel is meant to have any metaphorical meaning, whether Niffenegger is trying to say something about relationships. Of course, it is true that the participants in a relationship may have different understanding of the relationship, of each other, and of the future from each other. When a novel tells the story of a relationship from the point of view of just one of the participants, as is generally the case, this is something which can get lost, though it can also lead to effective scenes when the difference in their perception becomes clear to both participants, with comic or tragic results. In the end, I decided there is no deeper meaning, that the purpose of the time travel is simply to enable Niffenegger to examine the story of Henry and Clare from a different angle.

Thinking of The Time Traveler's Wife as the story of a relationship means that its quality should rest on the portrayal of the two characters and their interactions. Both Clare and Henry are flawed enough to be interesting, Henry more so than Clare. They come from affluent, middle class but difficult backgrounds, Clare's mother being manic depressive, while Henry's mother was killed in a road accident in front of him when he was six, pushing his father into alcoholism. (This suggests that the time travel is something of a search for somewhere to belong, with Clare being the place he finds, but that is a rather superficial way to look at a relationship, particularly looking at it from Clare's point of view.) To the reader, they are interesting, even if it sometimes feels that the novel is being expounded at a glacially slow rate.

Plot development is the most serious flaw in The Time Traveler's Wife, which is not only slow, but seems slower because the time travelling continually means that the reader is fed hints of what is to come. However, this doesn't really matter, as the main pleasure of the novel is the exploration of the central relationship. That, together with the intriguing idea, lead me to rate it at 8/10.