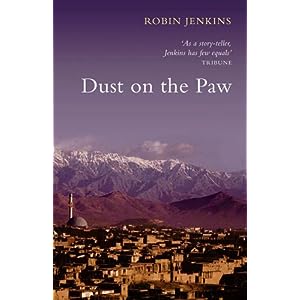 A truly superb but apparently forgotten novel, Dust on the Paw is set in Afghanistan in the fifties, when the seeds of that troubled country's current problems were already apparent.

Set in the consular community in Kabul, with most of the characters being staff of the British Embassy, the story describes the complications which occur when a marriage between an English civil servant and an Afghani science teacher is taken up by an important member of the Afghani royal family to promote as part of the cultural progress made by the country. The problems arise from the extremes of the cultural differences between the two countries - Afghanistan was a conservative Moslem nation even then - and through the racist attitudes, conscious or not, of the British.

This may not sound like an ideal environment for humour. Jenkins uses sly, cynical comments on the pomposity of the British consular staff and the clash between two very different cultures - particularly in their treatment of women - to amuse. The humour does not use race as its basis. (It is perhaps important to say this because of the age of Dust on the Paw). Instead, the butt of the humour is the racism of the characters, like a subtler version of the ridicule of Rigsby in seventies sitcom Rising Damp. This mostly works extremely well, though for me it dips in the first of the three big set pieces of the novel (two parties, one informal and one formal, and a military parade), as the focus is on one Englishman's failure to come to terms with the racism which he has just become aware of within himself, and the unpleasant behaviour it provokes in him. In fact, he is so unprovokedly unpleasant that this is easily the least enjoyable part of the novel.

The background of Afghanistan in the fifties is very atmospheric, and (according to the preface to this edition) accurate. Clearly, it was a country which Jenkins loved, even if he did not like everything about it. He is particularly unhappy about the shaddry - his now old-fashioned Anglicisation of chadari, the enveloping garment now better known in the West as a birqa. Even fifty years ago, progressives wished to abolish the garment, and the women who wore them were known as "shuttlecocks" because of their appearance. The sexism of Afghan life is portrayed as the counterpart to the racism of the British.

The title is a quotation from a medieval Persian poet, who described the poor as the dust on the paw of the rich and powerful; Afghan politics is portrayed by Jenkins as rife with corruption, even without the meddling of the external powers which was going on since the clandestine machinations of the British and Russians imperial powers in the nineteenth century and which continues today with the war to defeat militant Islamic terrorism in the country.

The impression which Dust on the Paw makes is something between Lawrence Durrell's Antrobus stories and the Balkan Trilogy of Olivia Manning. The consular background has got something to do with this, but I think that Jenkins' novel will appeal to admirers of either, within certain limits - the themes are a lot more serious than in the Lawrence Durrell.

This is a forgotten masterpiece by a writer I didn't know before the title caught my eye. My rating: 10/10. 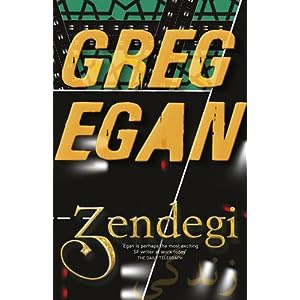 Science fiction is associated with prediction of the future in the minds of many. Few writers in the genre would feel that this is the main point of what they produce, but sometimes their work can be eerily prophetic. Zendegi is a near future SF novel (written in 2010, with the first part set in 2012), so it is perhaps less surprising that it is reasonably accurate; but actually its portrayal of a popular uprising in Iran has a huge number of similarities to the current spate of pro-democracy demonstrations in North Africa and the Middle East. (The afterword indicates that the events were inspired by the Iranian elections of 2009, which may well have also been part of the inspiration for the demonstrations in Egypt and elsewhere.)

There are two main viewpoint characters, the Western journalist Martin, sent to Iran to cover the 2012 elections, and computer scientist Nasim, who left Iran for the United States with her mother some years earlier, and who is working on a cognitive science project, aiming towards replicating human brain function in computers. Martin ends up staying in Iran afterwards, and this leads to a connection to the two characters when he marries Nasim's cousin. Her work becomes more important in the second part, which is really about the gradual development of artificial intelligence. This is set fifteen years later, and things have changed remarkably little in terms of technology - somewhat surprising, to my mind. Think how much things have changed since 1995, when the Internet was still something that people in general were just beginning to hear about (I worked for an ISP then, and marketing involved explaining what the Internet was to prospective customers).

The thriller like nature of the first part works better than the more speculative virtual reality oriented science fiction in the second. But by then the reader is interested in the characters, so becomes involved in Nasim's work and Martin's life in Iran. It is very odd: for a science fiction writer particularly famous for the hard science in his novels, Greg Egan has produced a story in which the best parts are near contemporary and character based.

This is not at all the sort of story I would associate with Greg Egan, who sticks in my mind mainly for novels like Schild's Ladder, which have far future settings and which deal with ideas based on the more bizarre current cosmological speculation. Mind you, the other Greg Egan novel I have reviewed here, Teranesia, is also set on Earth in the relatively near future, so it's not really a departure: he just doesn't fit into the pigeonhole into which I have mentally put him. Zendegi is more the sort of novel I would associate with Robert J. Sawyer - and would, in fact, make an excellent follow up for anyone who has enjoyed his WWW trilogy.

An interesting thriller, with science fiction elements not quite so good: my rating 7/10. 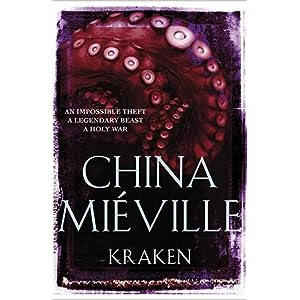 Fantasy is full of strange and alien gods, from H.P. Lovecraft's Chthulu onwards. Kraken is in this tradition, telling the story of Billy, a scientist in the Natural History Museum's Darwin Centre haplessly caught up in the occult when the complete giant squid specimen which he preserved disappears from its case without the glass being broken. A police investigation seems surprisingly perfunctory, concluding with an injunction not to tell anyone; but Billy is able to overcome the strange reluctance he has to talk and this just gets him deeper into a world of kraken worshippers, occult knacks and violent fundamentalist cults, a world hidden from the London most of the city's inhabitants know.

Kraken is not a new departure for Miéville. It reads like a cross between children's book UnLunDun and the New Crobuzon novels, the background being a nastier version of the first (the Knuckleheads are perhaps the most obvious detail) and the style and tone coming from the second. It is brutal, dark, and extremely well written. The characters are well drawn, particularly Billy, his friend Dale and policewoman Kathy.

The darkness is leavened to a certain extent by little flashes of wit, often almost Pratchettesque jokes. Typical is the idea of an artistic movement calling itself "the Exhausted"; artists who do similar work without being full members are described as "the Somewhat Tired". These moments were for me the best parts of Kraken; like Pratchett's humour, they do not seem contrived but just fit.

But... I didn't enjoy reading Kraken much. Of his other novels, I found The City and the City fascinating, and Un Lun Dun one of the best children's fantasy novels I have ever read. All the others, including Kraken, are writing I want to admire from a distance, but don't particularly enjoy close up acquaintance with. Overall rating: 7/10.