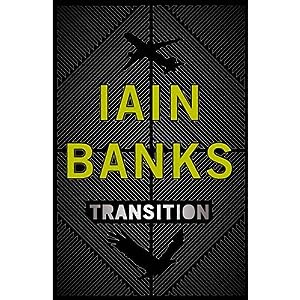 The idea behind Transition is not one particularly new in science fiction: there are millions of alternate Earths, and it is possible to travel between them through the use of a special drug; septus works rather like the sixties perception of the action of psychedelics, letting the mind transfer to a new body in a different world. However, a secret society, the Concern, acts in all the accessible worlds to ensure that history develops in a particular direction. To those it recruits, Concern claims to act to improve the lot of humanity, by eliminating (assassinating) those who will cause large scale suffering if their actions remain unchecked. Not everyone believes in the benevolence of the Concern, and the novel tells the story of one group which sets out to subvert the organisation and its shadowy leadership.

One of the things I like about Iain Banks is that its not that easy to suggest names of other authors who might be considered major influences. His novels tend to remind me of others of his novels. (At least, that applies to the non-Culture novels; the hyped-up space opera of the books for which he uses his middle initial has rather more obvious debts to earlier science fiction.) But here, in his twenty-fourth novel, I was almost immediately and strongly reminded of Michael Moorcock, particularly the Jerry Cornelius and Oswald Bastable novels.

The parallel worlds are what makes me think of Oswald Bastable: a fairly mundane link. (Jerry Cornelius is more similar in style and feeling.) However, Moorcock's worlds are much less similar to each other than Banks', and the people in them less important in comparison to those who are able to travel between the worlds. In the Bastable novels, following the careers of alternate versions of real people from Mick Jagger to Stalin is a large part of the interest, but few such people are mentioned by Banks. The alternate realities are barely more than just a mechanism to end a scene, like a punch line in a sketch show. The main difference between most of the alternates and reality is that the perceived terrorist threat to the Western world comes mainly from radical Christian extremists in the worlds Banks constructs.

The Concern is akin to the Business, from Banks' novel of that name, but seen in a darker light. (Though Kate, the heroine of The Business, eventually rejects them, too.) But, all in all, Transition is not much like the rest of Banks' writing. When reviewing The Steep Approach to Garbadale, I complained that it was too much a rehash of ideas from his other novels, but Transition goes too far the other way, throwing the baby out with the bathwater.

Transition is told using multiple viewpoints (some in the first person, some in the third). Each chapter advances the personal stories of several, but not always the same ones. Only one is constant, Patient 8262, who is apparently hiding from the Concern in a mental hospital. Other viewpoints include a hedge fund manager, a torturer, an assassin, and a member of the Concern's ruling council. It is these central characters which are Transition's major weakness, as none of them are consistently interesting or enjoyable to read about.

Warning is given at the very beginning of the novel that the words on the page should not necessarily be believed. The title page tells us that Transition is "based on a false story", and the first words of the prologue are "Apparently I am what is known as an Unreliable Narrator". These gimmicks perhaps belabour the point rather too heavily, but it certainly sticks in the back of the mind while reading the novel. I personally would have preferred to have been left to work out the narrator's unreliability for myself, and start with the line from the third section of the prologue: "This is how it ends": a much more effective irony.

All the constructive effort of the multiple narrative threads (something of a favourite device for Banks) needs to be rounded off with a satisfying, rounded ending in which they are brought together. This is more or less done, though the details are undermined by the emphasis on the unreliable narrator. (I myself have probably rather over-emphasised it here, but that is because it does seem to be a cause of many of the negative aspects of Transition.)

I never expected to say of an Iain Banks novel that it was boring, but it was something of a struggle to get to the end of Transition. Maybe it will seem better on a second reading, but that is not an experiment I am looking forward to conducting. 4/10.
Posted by Simon McLeish at 15:35 1 comment: