The most famous and lasting creations of Arthur Conan Doyle - Professor Challenger and, overwhelmingly, Sherlock Holmes - seem to place him firmly in the nineteenth century; these figures are an extremely important part of our iconography of Victorian England. And yet he wrote most of these stories decades after the times in which they were set, and the Sherlock Holmes stories go right up to the even of the First World War. Though these novels were among those which laid the foundations of modern popular fiction genres, they were firmly backward looking. This is also true of The Firm of Girdlestone, which reads like a product of the 1860s despite being written over twenty years later. It is traditional in themes and form, and could be seen as something of a pastiche of a writer like Anthony Trollope. Even though it looks back, though, The Firm of Girdlestone is not nostalgic. Instead, it takes the theme beloved of the writers who were Doyle's models, that of hypocrisy in outwardly pious pillars of Victorian society. It is not one of Doyle's most original or memorable creations, but it does still remain an enjoyable novel.

The central characters of this novel are not the hero and heroine, who are a rather colourless couple, notable only for their courage in adversity. The villains are far more interesting and dominate the novel: the proprietor of the firm of Girdlestone and his son. The firm itself drives the plot; run in an amoral (or as the Girdlestones would say, businesslike) way for years, the African traders are on the brink of collapse after some unwise speculation. The plot of the novel is basically a series of desperate ploys by the father and son to recoup their fortunes - over-insuring poorly maintained shipping; using rumours and false reports to try to manipulate the diamond market; and attempting to terrorise an heiress into marrying the son (the traditional method of raising money used by the nineteenth century villain). The pair represent the worst of unregulated Victorian business methods, and yet Doyle makes them exhibit different types of evil, which it would perhaps not be too fanciful to say are paradigms of the vices of their respective generations. For the father cloaks his deeds in a hypocritical veil of religious piety, while the son is brazen, vicious and brutal. The novel also charts the change from the father being the dominant partner to the son taking over this role. Though the father is the more intelligent (even if it is his speculation which has ruined the company), the important thing about Doyle's portrayal is that his hypocrisy is unconscious; he truly believes that he is a pillar of the church living a virtuous and respectable lifestyle. That is an idea which must have fascinated Doyle, and this ability to continually justify himself to himself makes him an unusual character.

The three novels that The Firm of Girdlestone is most clearly derived from are Our Mutual Friend, The Way We Live Now and Uncle Silas - all published about twenty years earlier. In particular, a lot of the plot is directly lifted from Uncle Silas. Perhaps the company of Dickens, Trollope and Le Fanu is flattering this novel somewhat, but it doesn't deserve to share the oblivion into which Doyle's minor novels seem to have fallen.
Posted by Simon McLeish at 11:07 No comments:

Three years after the events of London Match, and Bernard Samson returns, to begin narrating the second trilogy of novels about himself and his wife. With Fiona firmly established in the KGB hierarchy in Berlin after her defection, and his gradual return to being trusted in his own work for British Intelligence, and with his continuing affair with a much younger woman, everything seemed more or less settled at the end of that novel; but now something happens which beings to unravel all the loose ends that the reader thought had been tied up.

The novel begins this process in the first chapter, which takes place in Washington DC. One of the interesting things about the Game, Set and Match trilogy is the remarkably small part played by the American intelligence agencies, especialy considering the post-war relationship between the US and British governments. The few American characters are either connected to British intelligence in some way or (appear to be) freelance information gatherers. Now, though, the US begins to be involved (though the office of the opening chapter belongs to an Englishman, a former colleague of Bernard's who is a financial expert). Nevertheless, the real focus is still Berlin; everything in this series of novels revolves around the city that was the symbol of the Cold War.

Spy Hook is very much a character based thriller - as Deighton's novels often tend to be. There is no action "for the sake of it" in his novels, and this is more cerebral than most of them. Bernard still has an overwhelming desire to understand why his wife not only defected but abandoned him and the children. The question that the reader has to ask - if they have followed the series of novels so far - is whether the discrepancies he sees are really there, or alternatively that he's clutching at these tiny loose ends hoping that the whole tangle will fall apart. And, of course, this is only the first novel in a new trilogy, so we're not likely to find out anything other than how far Bernard is able to put other people's backs up.
Posted by Simon McLeish at 11:03 No comments: 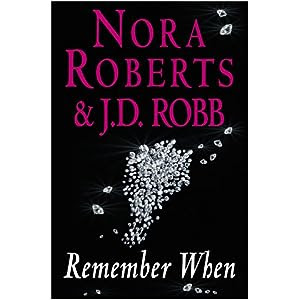 This is an extremely unusual collaboration - because J.D. Robb is Nora Roberts under a pseudonym. The reasoning behind billing the novel like this is quite simple, however: under the two names, she writes stories within different genres. Roberts is the name she uses to write romantic thrillers, and Robb is used for her science fiction detective series featuring Lieutenant Eve Dallas. The story here comes in two parts; in the first half we have a romantic thriller about a diamond robbert, and in the second Eve Dallas investigates a murder connected to a best-selling book describing the old robbery written by the grand daughter of the central characters from the first part.

Though this might sound rather like a gimmick, it actually works rather well, with a lot of the background later used in the Eve Dallas story told in the contemporary tale rather than holding up the action to explain how the earlier robbery had worked. It adds some interest to a story that would otherwise be nothing particularly special, entertaining though each part might happen to be. (Roberts is definitely a writer who produces enjoyable but not profound literature.) Each part is pretty typical of the other novels produced by Roberts under the appropriate name, and is a well written if not terribly original example of its genre.

The nature of this supposed collaboration is such that one of the little games that the reader often finds themselves playing while reading something produced by two well known authors is not possible - that is, trying to pick up clues as to who is responsible for what. But the idea of a collaboration with oneself is unusual enough and the writing good enough that this is an entertaining and most enjoyable light read.
Posted by Simon McLeish at 09:05 No comments: 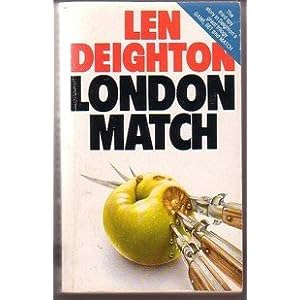 The third novel in the Game, Set and Match trilogy continues the story of how Bernard Samson copes with the aftermath of his wife's defection to the Soviet Union, the event which provided the climax to Berlin Game. KGB officer Erich Stinnes has in his turn defected - the central action of Mexico Set. And now it appears, from what London's intelligence services learn from Stinnes and other agents, that there is another KGB agent in a senior position in the Secret Intelligence Service. This time the novel is not so much concerned with the identity of the traitor, as the first part of the trilogy had been, but with whether the person pinpointed by the allegations is guilty or not. It certainly quickly becomes in the personal interests of many of the characters to support and exaggerate the rumours going round - this is office politics on a large scale.

The importance of the city of Berlin to this trilogy is hard to exaggerate. As a symbol of the Cold War it is unsurpassed, and so this is frequently true of spy fiction of that era. The divided city with its crazy town planning that resulted from being split makes an atmospheric background for these tales of betrayal. Mexico Set and London Match may use the names of other locations from Bernard's story for their titles, but Berlin is more important in the novels than either of them. So it is fitting that the final scene of the whole trilogy takes place in Berlin (though enough loose ends are left that it must have seemed unlikely that this was the last novel featuring Bernard Samson even before the appearance of Spy Hook.

Berlin Game is the best of these three novels, and indeed of all nine stories featuring Samson as the central character. But no one who has read that novel will fail to want to read the others, and they are rewarding too; Deighton is one of the best of thriller writers even when not at the absolute peak of form.
Posted by Simon McLeish at 08:56 No comments: