The third novel of the Alexandria Quartet may cover the same events for a third time, but it is quite different from both Justine and Balthazar. Mountolive moves away from the first person narrative by a young poet (whose name, we learn, is Darley, significantly similar to Durrell). It is replaced by a third person tale which mainly follows the point of view of Mountolive, a much older man and British ambassador to Egypt just before the war - a man of huge influence after Egypt had been virtually a British colony for much of the preceding half century. The earlier novels concentrated on Darley's affair with Justine, wife of wealthy Coptic merchant Nessim. While this is almost incidental, Mountolive had a similar affair with Nessim's mother while he was a young man, and this is where this novel begins, with what is effectively a long prologue. However, though the memory of this time is still strongly emotive to Mountolive, his concern with Justine and Nessim is more political, for they are suspected of working with Zionist groups in Palestine in anti-British, anti-Arab terrorism there.

This overtly political side to the plot, which almost puts Mountolive into the thriller genre (the style is too slow moving to allow this), is new in the Quartet. Even the Antrobus stories, which are set in the diplomatic corps, have nothing of this sort (being mainly concerned with humour derived from protocol disasters). However, Durrell witnessed at first hand some of the debacles attendant on the dismantling of the British Empire (his experience in Cyprus being documented in Bitter Lemons), and it is not surprising that a book which appeared at the same time as the Suez Crisis, even if not set at the time, should bring to mind some of the political chaos of the period.

In the last fifty years, John le Carré, Len Deighton and a host of imitators have made careers as thriller writers through books about betrayal and how it feels to suspect a friend. Durrell does much the same, in a way, though his characters have no desire to investigate; they want to find out as little as possible, in the hope - and belief - that the suspicions will prove to be groundless. (This inactivity is one of the main reasons that Mountolive can never be classed as a thriller.) This, of course, also gives an insight into the events at the time a few years before the book was written, the days when the treachery of Philby, Burgess and Maclean became known.

As Justine (who was not a native Egyptian) is partly a symbol of Alexandria, so Nessim's mother in her turn is something of a symbol for Egypt as a whole. In this respect, Chapter XV, in which Mountolive finally meets Leila again, is really the key to the novel. The reality is that Leila's beauty, so vividly remembered, has been ravaged by small pox and age, to the extent that even close up he does not recognise her. The meeeting is immediately followed by a deliberate attempt on the part of Mountolive to re-establish the romantic mystique of Egypt in his mind - Leila's symbolic role is apparent even to the other characters in the novel.

Mountolive and Darley also have symbolic roles to play - Mountolive is British involvement in Egyptian affairs, and Darley is the literary interest in Alexandria. Once you begin to see characters as having wider significance, it is hard to stop assigning such roles to them; the answer is of course to always think about whether doing so adds to the interest of the novel. Characters like Pursewarden and Melissa only have parts to play in relation to Darley or Justine, so even though they are more important characters in terms of the Quartet as a work of fiction, they are not really symbols in the same way as the ones already mentioned.

The earlier novels both have interesting endpieces, as does the final part, Clea; Mountolive has none at all. This has the effect of underlining the finality of the novel: this is the last re-examining of these events (Clea picks up the story of the main characters again some years later), and there is no useful purpose in another collection of bons mots or impressionistic notes; Durrell no longer wants the reader to constantly re-evaluate what has gone before. In some ways, Clea is the end-paper to Mountolive, as well as rounding off the whole Quartet.
Posted by Simon McLeish at 11:59 No comments: 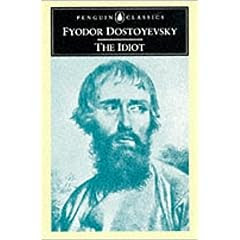 Humour is not a quality usually associated with the nineteenth century Russian novel. Generally, people in the West think that they are lugubrious and depressing, if such universal works of literature could be said to express a single emotion. The name most likely to be cited as an exception is Gogol, and certainly not Dostoyevsky, even though the younger author greatly admired and imitated the older in his early years. Yet there is considerable amusement to be had from The Idiot, in which the author pokes fun at society manners in a way that is hardly stereotypically Russian. Indeed, there is one passage, where a mother laments that her daughters remain unwed only to torment her, that a reader encountering it out of context might well assume that it had been written by Jane Austen. Of course, there is also the major irony that the man condemned by polite society as an idiot is the only character that the reader feels they can look up to.

Naturally, humour is not the main, or even an important part of The Idiot. It is, on the other hand, the most surprising - particularly since this is the third time I have read the novel, and it is not an aspect I remember from earlier readings (though they were, admittedly, quite some time ago). Another point to make is that the humour comes through in David Magarshack's translation; it is very easy to lose this when creating a version of a novel in another language. (Apparently the early translations of Dickens into Russian are a case in point.) Magarshack translated many Russian stories and plays into English (as well as non-fiction), including just about all the Russian literature that appeared as Penguin Classics, like this one, and any of his versions can be recommended despite now being quite elderly.

While it is true that in general Dostoyevsky's mature novels are concerned with the psychology of the central character, this is true in The Idiot in an indirect manner. The novel is not about the development of Prince Myshkin himself (which is minimal except for the final crisis), but about how his personality affects those around him. The Prince has grown up in a Swiss sanatorium, under treatment for his periodic epileptic fits. At the beginning of the novel, he returns to Russia, penniless, for the first time since early childhood, and almost immediately inherits an unexpected fortune. While not really the idiot that many think him, his illness has left the prince with a strange diffidence, which allied to his virtuous, simple and open personality makes him stand out as completely different to the polite society around him; in a supposedly Christian country, he is a truly Christlike individual, yet is almost completely alien to those around him - a satirical point if ever there was one, yet not something strongly emphasised by Dostoyevsky. Despite the author's strong political convictions, he does not seem to want to write about the shortcomings of the Russia of his day.

Instead, as I have indicated, The Idiot is about Prince Myshkin's impact on the worldly upper class in St Petersburg and Moscow. Initial reactions include bafflement, rejection and amusement, and through the whole novel most characters regard him with either indignation or affection, often alternating in a single individual throughout. This is one reason why the Prince's character cannot develop, for he is the novel's only stable reference point, the reverse of a much more common literary structure where the background characters remain static and the main ones evolve in the foreground. (This makes The Idiot sound experimental, and it is far more mainstream for that to be a way to categorise it. It does in fact feel very finished, more so than, say, The Devils, and this is an amazing feat, considering the rapidity with which it was written and the motivation behind the composition, as hack work to pay off pressing gambling debts.)

As with all Dostoyevsky's central characters, Prince Myshkin has an autobiographical feel to him, and it is true that the writer shared the suffering of epileptic fits with his creation. Additionally, he was also something of an outsider and certainly an idealist, but there were many aspects to his personality not shared by his creation, such as the compulsive gambling that led him to write the novel so fast and which is documented in the more clearly autobiographical The Gambler. I don't know what it is that Dostoyevsky does, by the way, but he is one of the best writers at the trick of making central characters seem to be the author himself, rivalling the Dickens of Nicholas Nickleby, David Copperfield, or Great Expectations.

The novel is not entirely even in standard. The second half of Part Three is not so good, with the tedious confession and attempted suicide of Ippolit, and the correspondence between two women who admire the Prince. Things pick up again in the final part, but to my mind this must be the most disappointing fifty pages in any of Dostoyevsky's mature novels.

The "holy fool" is not a particularly frequent central character in modern fiction, perhaps because they are a type which it is hard to give a believable internal life, and because they seem rather passive. Outside of Dostoyevsky's writing, the examples that come most easily to mind are from medieval stories or work derived from these (such as the opera Parsifal). Dostoyevsky used the type again, to a certain extent, in Alexey Karamazov, but the only clear literary example I can think of taking a central role is Mervyn Peake's Mister Pye; Forrest Gump might be one from film. I suppose that they are not characters who occur frequently in real life either, and I suspect that if they did they would be just as disconcerting to meet as Prince Myshkin is depicted as being. The hermit is something associated with the true spirit of (pre-Communist) Russia, the solitary monastic life being much more important to the Orthodox Christian tradition than to the Catholic, so it may be that in Prince Myshkin Dostoyevsky idealised himself into a tradition that idealised Russia. Whether he is autobiography or symbol, or both, isn't really important; this is a great novel whatever you decide.
Posted by Simon McLeish at 10:13 No comments: