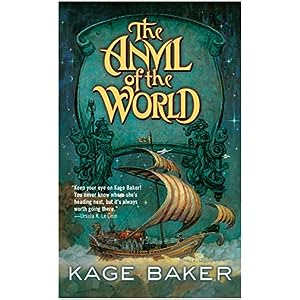 The name of Kage Baker was not unfamiliar to me, as I had read several encomiums produced when she died last year. They were sufficiently positive that I tried reading one of her books, without enjoying it much, and being left feeling somewhat mystified by the praise she had received. I did eventually try again, and found The Anvil of the World truly delightful, one of the funniest fantasy novels I have ever read.

Though perhaps it is not really a novel, as it consists of three episodes which are just about independent of each other, sharing characters but readable without reference to the others. The main character is a retired assassin who has taken the name Smith, a common name shared by several of the others in the The Anvil of the World. In the first  story, he takes a job as master of a caravan passing through dangerous country where travellers are at risk from demon bandits; in the second, he is running an inn in the resort of Salesh-by-the-Sea; and in the third, he is kidnapped by one of the passengers from the caravan, who is also the owner of the inn, who wants Smith to help him rescue his sister.

The humour is built around absurdities, particularly literal minded misunderstandings, and owes debts to L. Sprague de Camp (novels like A Planet Called Krishna and the Harold Shea series) and, to a lesser extent, Terry Pratchett (the Igors, particularly). Despite The Anvil of the World being laugh out loud funny, Baker also manages to be more serious, with major themes in the novel including racial intolerance and the nature of heroism. She manages to be interesting in the latter, though it could be argued that it is the major theme of the whole fantasy genre.

Being the first of a series, it naturally leads on to the next, not called (as the trailer at the end of this edition has it) The Life of the World to Come, but (less pretentiously) The House of the Stag.

An excellent novel which makes me really pleased to have tried Kage Baker's writing again - 8/10.

Another Banks novel sticks to a formula which he has now used many times. Perhaps this is not a shock, but for someone who was praised for his inventiveness at the beginning of his career, it is disappointing to read another failure to produce something new. That is not to say that Surface Detail is not well written and enjoyable to read; it is just too much like the other Culture novels, without a spark of special inspiration.

The background to the plot does in fact introduce a new (as far as I can remember) element to the Culture. There have been enhanced humans, and intelligent machines, but here in Surface Detail we also have virtualised humans. One of the galaxy's cultures runs virtual hells, into which its inhabitants are loaded on death. This is a practice widely condemned in the galactic community, and a virtual war has been going on for some time between pro- and anti-hell factions.

The descriptions of the hells owe a lot to Dante's Inferno and, more directly, the paintings of Hieronymus Bosch. The torments of the damned seem to me to be more effectively portrayed by Banks' models, as the details of the nastiness of the torture are blunted by their extremity: it is hard to be affected by an account of someone who has been flattened and used to pave a road, because the experience is just so alien and cartoonish. It is hard to accept it as real enough to empathise. Banks is no stranger to the portrayal of the unpleasant and violent, as can be seen from his very first novel, The Wasp Factory.

Against this background, the main action is about revenge. The book starts with a tycoon from a relatively backward world, Veppers, killing a slave who has bitten off his nose. She finds herself not dead, but with her conscious mind transmitted at the moment of death to a Culture ship, courtesy of an unexpected present from a Culture citizen for whom she had done a favour. Equipped with a new body, Lededje sets off on a mission to kill Veppers, which becomes enmeshed into the complex machinations which surround the war over the future of the hells - a war which the Culture is not officially involved, though sympathetic to the anti-hell side.

It is this plot which is infuriatingly similar to previous Culture novels. The idea of a personal quest is an extremely common way to drive a plot, because the concentration on the desires of a single individual makes the story more likely to grip the reader, who is after all an individual human being. But for the Culture, parts of the background make this more difficult to accept than usual: why would the immensely powerful machines, who can create superhuman avatars at will, manipulate human beings into taking the central roles in their schemes? Banks also has a tendency to dilute the effectiveness of the personal quest through the use of multiple viewpoints, which doesn't help. Usually, this hasn't affected my enjoyment of Banks' writing too much (though I've never enjoyed the Culture novels as much as his others), but here it does seem particularly problematic.

Given that I often take space in these reviews to criticise a book's production (appearance, proof reading, gushing blurbs, etc.), it is nice to be able to say that I really liked the design of this edition of Surface Detail, which uses fractal images (specifically the Mandelbrot set) effectively and evocatively in the cover image. And, most importantly, the picture used is relevant to both the title and the content of the novel.

All in all, Surface Detail is a well executed but ultimately disappointing Iain Banks novel - 6/10.