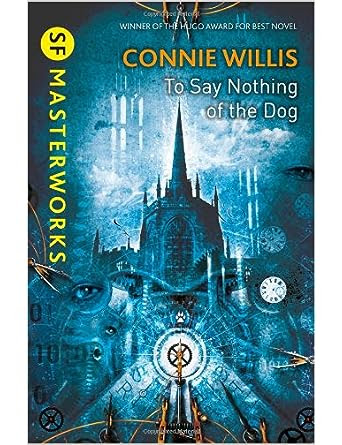 To Say Nothing of the Dog is a time travel novel, a farce around the idea of a professional time traveller sent to a time which is not his specialist historical period - Victorian England instead of the Second World War. A powerful and rich woman is trying to recreate the original Coventry cathedral destroyed in the Blitz after the sixties replacement is turned into a shopping centre. She is able to monopolise the services of the Oxford time travellers, retrieving items believed destroyed by the bombing at the last moment (so their removal doesn't create a paradox). But there is one ornament which is supposed to be there on the night of the bombing, but which can't be found - so operative Ned Henry is sent further back than 1940 to find out what happened to it.

In the 1880s, Henry gets involved with eccentric Oxford dons, a trip down the Thames, an upper class houseparty, and a manic attempt to introduce the right pair of lovers to each other so that the future is saved, even though Henry only knows the identity of one of them and the initial letter of the name of the other.

On top of this manic plot, Willis piles on a huge variety of references to other literature: a wide selection of the more popular English language writers from Jane Austen to PG Wodehouse and Robert Heinlein via Dorothy Sayers are either directly referenced or are clear influences. The book as a whole is a homage to Three Men in a Boat - the title To Say Nothing of the Dog is the subtitle to Jerome's comic classic. (I want to point out that the ending of The Moonstone is given away - so anyone planning to read Wilkie Collins' novel who doesn't want to know what happens beforehand should read that first.) Few of the references need to be familiar in order to follow To Say Nothing of the Dog; the most important after Three Men in a Boat is probably Gaudy Night. However, the more of them which the reader picks up, the more they will enjoy the game. This is a type of meta-novel which appeals to me greatly, and I would put several of them into my all time favourites list, of which To Say Nothing of the Dog is now also one.

Very funny, fantastically clever: To Say Nothing of the Dog leaps straight into my list of favourite science fiction novels. I'm a little surprised I hadn't read it before, as it's a Hugo winner and I have been avidly reading the genre since well before it was published, but now I am very glad I have done - 10/10.
Posted by Simon McLeish at 18:56 1 comment: