Mohsin Hamid: How to Get Filthy Rich in Rising Asia (2013) 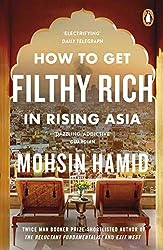 This is Mohsin Hamid's third novel, after The Reluctant Fundamentalist, which I still think is the best novel to portray the aftermath of the 9/11 bombings, and his debut Moth Smoke, which I didn't like so much and now barely remember. How to Get Filthy Rich in Rising Asia is, like The Reluctant Fundamentalist, an attempt to bring attention to issues from a world that westerners tend not to think about much - this time the poverty stricken Asian communities where very rich and very poor often live almost side by side. It is much more similar, however, to Aravind Adiga's The White Tiger, which has an almost identical theme.

Adiga's book, while noteworthy for the vigour of its protagonist, is a novel which is traditional in form. Hamid tries something different: How to Get Filthy Rich in Rising Asia is told in the second person, as a self help manual, with a certain amount of amusing ironic deconstruction of what a self help book actually is (pointing out that if there is one self it is meant to help, it's the author who pockets the royalties, for instance). Each chapter follows the same format - a succinct title ("Move to the City", "Get an Education"), a short introductory paragraph about the nature of the help offered, and an instalment from the "your" story. I usually find second person narratives extremely irritating, but the self help conceit and the thought that has gone into the writing and its balance between the stark reality of life in "rising Asia" and humorous touches means that it actually works quite well.

There is very little in the novel to date the start and finish, though it covers sixty or more years, from young childhood to death, slightly unsettling in the second person. Hamid's nationality suggests that the location could be Pakistan, though he is careful not to be too specific (omitting mention of religion, for instance, or any politics beyond that of the city in which it is set) - it could be any number of places in Asia. A Pakistani background would also suggest that the novel describes a life from colonial independence to almost the present.

Returning to the comparison of Hamid's novel with Adiga's, I would say that The White Tiger is more profound, while How to Get Filthy Rich is more accessible. The same statement would still be true if The Reluctant Fundamentalist is substituted for The White Tiger. I enjoyed How to Get Filthy Rich in Rising Asia, and Hamid has something important to say (if not anything new), but I don't think it will stay with me in the same way as the other two novels have. My rating: 8/10.
Posted by Simon McLeish at 09:24 No comments: