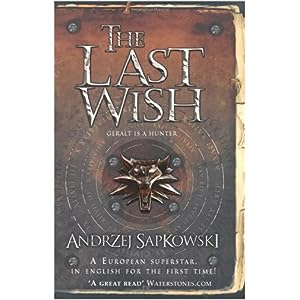 "Geralt is a a hunter", the front cover tells us. Not only is this hardly the most eye-catching tagline in the history of publishing, it really undersells the virtues of Sapkowski's novel. This is not a simple fantasy novel, though this (combined with the advertising for the associated computer game on the back pages) makes it look as though The Last Wish is just a violent fantasy, the story of a bounty hunter. This is particularly ironic, as Geralt himself is continually telling prospective employers that he is not a bounty hunter.

Geralt is in fact a "witcher"; he is a hunter of supernatural monsters, and The Last Witch describes a series of his adventures in this role. The structure of the novel suggests - and I haven't looked this up to check whether it is true or not - that most of it originally appeared as a series of shorter fiction. It is episodic, with a linking thread provided by interludes between the episodes, which are thus presented as flashbacks. This is a fairly common structure in novels stitched together from shorter fiction, and needs the episodes to be quite uniform in style and quality with the linking story having some interest of its own in order to work: Sapkowski does this at least as well as any other example I can think of.

Although The Last Wish appeared in English in 2007, the story was written in the 1980s. Then, the idea of a hunter of this type would probably have evoked Bram Stoker's Van Helsing in Dracula, rather than Buffy the Vampire Slayer or possibly Anita Blake. But The Last Wish is not really like any of the stories involving these characters; it reminded me most of Jack Vance, particularly the Dying Earth stories. Much of the setting, the tone, and the dry humour are similar, particularly in the way in which Geralt's world weariness is portrayed. Laurell K. Hamilton is less interested in humour and more in the relationships - particularly sexual ones - between the characters in her Anita Blake novels; the humour in the Buffy TV series is generally darker or derived from smart banter between the teenagers; and Van Helsing is deadly serious.

This is an excellent fantasy novel, and I will looking out for more by this writer - 8/10.
Posted by Simon McLeish at 06:39 1 comment: 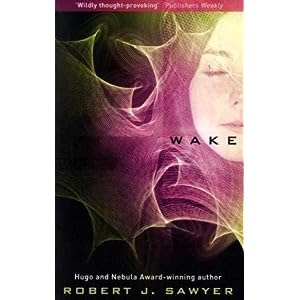 J.K. Rowling aside, who is the most successful science fiction / fantasy writer of all time? One candidate would be Michael Crichton, who wrote more books turned into famous films than any other writer I can think of: Jurassic Park, Westworld, The Andromeda Strain. He's not an author I like very much, either as a novelist or screenwriter; although his books are really thrillers with SF themes, I tend to find them dull and have never actually managed to get to the end of any of them; the films work rather better, but even so are not my cup of tea. This is a view I appear to share with others in SF fandom; as a writer he was rarely nominated for an award (the only major one being the British Fantasy best novel nomination in 1995) despite his popularity.

The reason I bring up Michael Crichton is that I expected Robert J. Sawyer to be a similar writer. I first came across his work through the TV series of Flashforward, based on one of his novels. I watched the first two episodes, then gave up because (like Heroes) it seemed to be rehashing the same thing every week and neither moving forward at any speed in the overall story arc nor having interesting single episode stories. But the basic idea was interesting, and seemingly tailor made for TV adaptation, especially because the final episode was scheduled be shown on the date that everyone had seen on their vision of the future. While the plot meant that a TV adaptation seemed more appropriate than film, this seemed to me to be a very Michael Crichton style idea. So I didn't really think of reading any of his novels.

I'm not entirely sure why I added Wake to my list of books to read after giving up on Flashforward. I probably saw a favourable mention in a blog somewhere, or a review on SF Site. (A bit of checking reveals that it is because of its nomination for the 2010 Hugo: one of a large number of awards and nominations.) But I am glad that I did. It turns out, you see, that Sawyer is not at all like Michael Crichton as a writer. Wake is more like Neal Stephenson or Charles Stross: someone who knows about computers and has interesting ideas about their future which they discuss through science fiction. (He is one of the most enduring online presences in science fiction, as his home domain name, http://www.sfwriter.com/, suggests.)

After that long digression, I should at least say something about what Wake is about. There are three strands to the story, all of which are about cognitive awakening. The main one is the story of Caitlin, who was born blind and who is offered the chance to regain sight through an operation which connects her visual cortex to a hardware device which she nicknames the "eye-Pod". But as well as learning to see - and this is very interestingly imagined by Sawyer - she also discovers that connecting the device to the Internet means that she can "see" the structure of the Web. And part of what she sees forms the second major strand: in the background, there are what appear to be cellular automata, which begin to seem to be an emergent intelligence from the lost an corrupted packets which never expire (Internet communication is made up of packets with a "time to live" value, decreased by one each time they pass through a router; if this value is corrupted or they pass through routers with buggy software, this could lead to packets which never reach their destination and are never destroyed). The third strand is about a chimpanzee which begins to produce representational art: recognisable portraits of one of the people who look after it. This is not so closely integrated into Caitlin's story, but that may well be left to the second part of the WWW trilogy.  A fourth strand, about a dissident Chinese blogger, has loose ends which will clearly be picked up later.

The theme is clearly the development of consciousness, and is heavily influenced not just by current ideas about how machine intelligence might arise but also by the writings of Helen Keller, on how it felt to begin to be able to connect with other people after living blind and deaf since childhood - unlike Caitlin, she was not born blind but became so following an illness as a baby. Another background influence is the work of Julian Jaynes, who controversially argued that the modern human consciousness did not come into being until very recently (3000 years ago or so), early literature describing individuals who did not act in ways commensurate with fully integrated minds. Caitlin, as a bright teenager interested in such topics because of her blindness, makes a good conduit for Sawyer to introduce the concepts he wants to discuss.

This is one way in which Sawyer achieves one goal of good science fiction writing. In a genre derided for clumsy "info-dumps", finding a naturalistic way to explain the clever ideas and concepts behind your writing is important to many authors. Readers do not want to see endless conversations in which the participants tell each other things they already know, for the benefit of the reader, or to have lengthy explanatory sections or footnotes. Sawyer manages to do this really well here, and the combination of interesting ideas and good writing makes for a fascinating and enjoyable reading experience. As the Hugo nomination shows, this is one of the SF novels of the year, and is deservedly so. My rating: 9/10.
Posted by Simon McLeish at 06:19 1 comment: