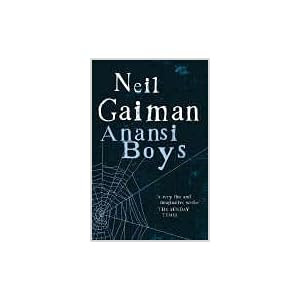 Neil Gaiman's new novel is not a sequel to American Gods, but it shares a setting and many of the ideas behind the earlier story. There is one shared character, in a way: Anansi the trickster spider from African myth, a major source for the stories of Brer Rabbit that might be more familiar to many Westerners. The premise of Anansi Boys is that Anansi is dead, and his son Charlie, a London-based accountant, has to come to terms with who his father was, at the same time discovering that he has a brother who has inherited his father's supernatural powers, yet seems to want to take over Charlie's dull life.

Generally, the tone is quite light - this is Gaiman's sunniest novel to date with the possible exception of Pratchett collaboration Good Omens. This is true even though the original Anansi stories have a definite nasty side. The originals, some of which are retold here, are generally about practical jokes, which can really only be excused because they show the underdog winning by his cleverness - after all, what chance does a spider have against a tiger physically?

Perhaps because it is lacking in good ideas, Anansi Boys does not seem as good as American Gods. It's purpose is less serious, however; it is meant to entertain, and it does so magnificently. It does seem more Tom Holt than Neil Gaiman; not necessarily a bad thing, but not what I expected.

At the end of the book, there is a short series of appendices, explicitly compared to the extras that appear on DVDs. As there, some are more interesting than other; a deleted scene and a short interview with Gaiman add to the novel, while the banal questions for book groups don't. One good thing about the deleted scene is that it shows that Gaiman is willing to cut out good bits if they don't fit in to the flow of the novel, something that many of today's fantasy authors could do well to copy.
Posted by Simon McLeish at 16:10 No comments: 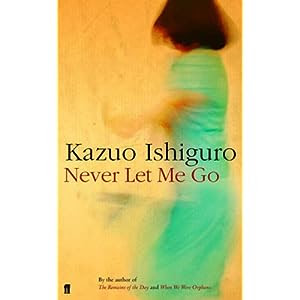 I have remarked before that frequently when a successful mainstream writer produces a novel with science fiction themes in it, critics overpraise it while it falls flat to long term genre fans. This is basically because both author and critics are unfamiliar with ideas that are commonplace to the fans. Most of the exceptions to the rule come from the early days - Huxley, Orwell, and so on - and succeed because of the strength of the reason for turning to the genre.

The first of the 2005 Booker Prize shortlist I have read, Never Let Me Go is also the first novel by Ishiguro I have read. My previous acquaintance with the author was limited to about the first half hour of the film of Remains of the Day, and that put me off reading his work. Though evidence in the story points to a setting in the recent past (use of Walkmans, for example), it uses ideas from the science fiction genre and reads almost as though John Wyndham were writing today.

The story of Never Let Me Go is about memories: an adult looks back on growing up. But she grew up as part of a group with an unusual destiny; her boarding school is strange, very cut off from the world, and there are occasional hints of a chilling fate awaiting the children. Hailsham is not an orphanage, but a hidden establishment to bring up clones, for later use as organ donors for transplant surgery. This is an idea that turns up reasonably often in science fiction, but I suspect that with this setting, the story would then probably go on to describe how the clones bring down the system through their intelligence, and Never Let Me Go is not like that at all. The characters in the novel never really consider rebellion or flight (except by talking about the possibility of a "deferral" within the rules), even when they reach the point of being selected as donors. The horror of their situation is to an extent understood by them (for example, they use the euphemism of "completion" to refer too their eventual deaths), but it is not what they think about. Indeed, the tone of the narration is reminiscent resignation, almost nostalgic regret, as Kathy looks back on her time at Hailsham. By creating an atmosphere of understated melancholy, Ishiguro has made this a more effective novel than it would have been if he had dwelt unsubtly on the horror of these children's lives.

A lot of the more intellectual science fiction has a purpose beyond the literal meaning of the words on the page - social criticism, a political or philosophical position to attack or defend, the impact of new technological ideas on individuals or society. The use of science fiction ideas suggests that there might be a similar purpose in Never Let Me Go, and there is - but exactly what it is is not made clear until near the end of the novel, at it is more subtle than just suggesting that the use of human clones as transplant organ banks is morally wrong. The reason no one has been willing to end the use of the clones is that they bring immense benefits (curing cancer among them), which mean that most people want to forget that the clones are real people and just think of them as though they were machines manufactured to grow the organs. So the issue that is behind the novel is about how people ignore the more unpleasant aspects of their culture, in order to live a comfortable life; and that this is not right, because there are some things that should not be done, no matter what the benefits are. Ishiguro makes no attempt to discuss where the line should be drawn - factory farming, animal experimentation, suffering in the third world to maintain the lifestyle of the rich nations of the world, or where. The end does not justify the means, and we should be aware of it; that is what Ishiguro is saying.

This is an atmospheric and thought provoking story, and proves that today's mainstream authors can venture into the territory of the science fiction genre without making their ignorance obvious.
Posted by Simon McLeish at 16:02 No comments: