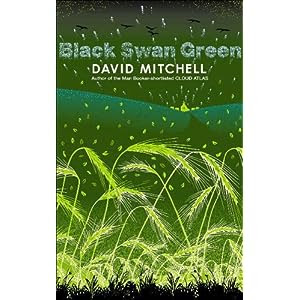 With many considering Mitchell's previous novel, Cloud Atlas, to have been robbed of the Booker Prize a couple of years ago, and with Black Swan Green at one time the bookies' favourite from this year's long list, it was a big surprise when it was left off the short list entirely when it was announced in early September. Every year, I set out to try to read the half dozen novels on the short list, as they should include the best in literary fiction from the Commonwealth, and every year two or three of these novels are ones I find unreadable (or at least, unfinishable). The reasons for this can vary, but usually the problem is that I find them dull and unimaginative. Neither could be charges laid against Mitchell's work; his ideas are interesting, and the writing used to express them draws the reader into the world he describes.

Having said that, Black Swan Green is very different from Mitchell's first three novels. They all have some quirkiness about their narrative structure, like Iain Banks' early novels, that makes them not quite mainstream. Here, though, we have a straightforward first person narrative. In fact, the story of a thirteen year old boy in early eighties England reads like many first novels: it has a distinctly autobiographical feel to it. I don't know enough about Mitchell's life to decide whether or not it is based on his teenage years, but he is at least about the right age.

In fact, narrator Jason Taylor is almost exactly one year younger than myself; I was fourteen during 1982 not thirteen. Although I was also living in England, my circumstances were rather different from those of Jason Taylor, even though we actually shared experiences. While Jason was coping with bullying, learning about girls, discovering his talents as a poet and seeing the end of his parents' marriage, I was dealing with less subtle but more violent bullying (I still have scars on my back), learning about girls in the more restrictive environment of a single-sex school, discovering my talents in mathematics and music and learning to live with my father's disability (which followed a stroke a year earlier). These are fairly obvious similarities in our situations, which makes this book speak to me more strongly than it will to many other readers, but there were also differences. I was much more introspective than Taylor is made out to be, much less interested in popularity with others at school, for example. More of a geek, in other words. However, if I had written Black Swan Green, suspicions that it was semi-autobiographical would be well-founded.

So this is a well written, interesting novel with a believable central character. Why, then, has it been overlooked by the Booker jury? It is more conventional than Mitchell's earlier novels, but that should not matter when many of the books shortlisted in this and other years are as much, if not more, conventional. I have commented before on the attitude of the literary establishment to science fiction even today, but there are no genre elements in Black Swan Green at all. However, authors as well-regarded as Iain Banks have never been shortlisted at all, so it may be that just being a writer associated with science fiction can be enough to taint your name in the jury's eyes.
Posted by Simon McLeish at 14:59 No comments: