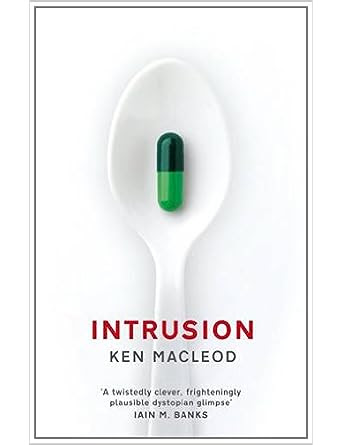 Ken MacLeod is an author whose work I sometimes really like (the Star Faction books) but who at other times doesn't really connect with me (the Engines of Light trilogy). Intrusion falls into the second category.

It is one of several recent novels by MacLeod which are stand-alone near future dystopias, rather like the series of similar works produced by John Brunner in the 1970s. There are two main elements to Intrusion: an encroaching "nanny state", particularly concerned to make people live more and more healthy lifestyles; and the moral and social consequences of advances in genetic engineering.

These are given a human aspect through the central character, a pregnant woman who refuses to take "the fix", a pill which sorts out an embryo's genetic abnormalities. Although this refusal is not a crime, Hope is unwilling even to discuss the reasons behind her decision, and this makes her a person of interest to the police - rather in the way that attending a mosque seems to do in the West today. The issues soon become muddled, as the plot development is based on the possibility that Hope's husband might have the second sight, and this begins to take prominence over the elements which were important at the beginning.

My problem with this is that the second sight, by its nature more fantastical than the otherwise realistic seeming near future setting of the novel, just doesn't fit in to Intrusion. It feels like a device used to push the plot forward, without being integrated into the action in a meaningful way. It is given a pseudo-scientific explanation, but one with some pretty obvious holes in it to my mind.

In other areas, too, it feels that there is a certain laziness to the construction of Intrusion, as evidenced by the name of the protagonist. This may be intended to be an ironic gesture, but is neither so outrageously obvious to be fun (as Hiro Protagonist is in Snow Crash), nor sufficiently understated to be interesting.

The subject touches on issues at the very basis of how humans live in social groups. To do so necessitates giving up some individual freedom for the good of the group; the question is, where does the line between individual and state lie? Since the answer to this question differs radically from person to person, culture to culture, and subject to subject, it is not one which can be discussed in depth in a single book - indeed, I think it could be argued that the whole of political theory, and much of sociology and anthropology, deals with ways in which this question can be answered. So it is not surprising that even the relatively limited scope of the discussion in Intrusion merely scratches the surface of what might be said about health care and the government, but I did feel that more could be said - Intrusion seems to be more a statement of a fixed position (essentially, that Hope should have the right to refuse if she so wishes), than an analysis or a treatment in which the plot involves a developing portrayal of the issues. Brunner's dystopias were mainly about attempts to change society (or, more specifically, attempts to reform society to ameliorate problems caused by undirected sociological development), and this makes them much more satisfying if more depressing than this novel.

All in all, an unsatisfying novel which never really gripped my attention - 4/10.
Posted by Simon McLeish at 10:00 No comments: