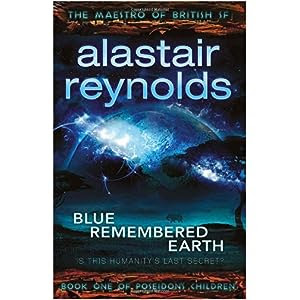 The setting of Blue Remembered Earth is a post-scarcity world, where an environmental collapse has been followed by the rise of African states as superpowers, a renaissance which is originally solar then fusion powered. The Akinya family has played a leading part in this, and its members are now famous and wealthy. The plot is set in motion by the death of their matriarch Eunice in her space station retreat. The main characters are her grandchildren, the idealistic Geoffrey and Sunday, who have rejected the Akinya corporate legacy, and the mercenary Hector and Lucas. A secure deposit box belonging to Eunice sends the first two on a quest to discover her true legacy, the first step in a treasure hunt across the solar system where each clue points to the location of the next, and Hector and Lucas are not far behind them.

This rather childish-seeming plot is not what the book is really about - and Reynolds can certainly do better at this aspect of novel construction. Reynolds is a master at world-building, and Blue Remembered Earth is basically a tour of the man-made wonders of the solar system of the future. The novel is a gallery to show off some of his ideas, some of which could easily be the foundation for whole novels of their own: from the "ethics shunt" installed in Lucas' brain to prevent morality getting in the way of business, to the Evolvarium, an area of Mars in which machines are left to evolve and compete, like a physical version of the genetic algorithms run in many of today's computer simulations.

While most of Alastair Reynolds novels remind me of writers like Iain M. Banks, Blue Remembered Earth is much more like older genre figures, in particular Arthur C. Clarke. Instead of writing a wide ranging space opera, here Reynolds sticks to the solar system, which is full of its own wonderful objects, including an updated version of Clarke's famous lunar monolith - Reynolds' version is on the Martian moon Phobos, and is fantastically carved by human tourists. There is an element of guided tour about the novel as a result, which will not be to all tastes. Like Clarke's 2001, the story builds up to a climactic revelation. The big question for a potential reader is going to be whether this ending really is a climax, or just a disappointing let-down. This is of course also the case for any story in any medium which is constructed as a sequence of "reveals" (to use a film-making term); The Whisperer, which I recently read, is an example of a thriller set up in this way, which I don't feel has a sufficiently good climax to work. Here, at least from the point of view of the characters, the ending is better, but to this reader, some aspects (particularly the reasons for the secrecy and the treasure hunt) don't quite gel properly.

Which brings me to the title of the novel. It is derived from A.E. Houseman's A Shropshire Lad, of which the relevant lines seem to be "What are those blue remembered hills...? That is the land of fat content ... The happy highways where I went and cannot come again." It is hard to see how Houseman's poetic evocation of nostalgia relates to a novel which has such an optimistic view of the future of the human race, even if some tribulation has to be endured before that future arrives. The key is, I think, that this is the first of a new series: it is the blue remembered earth described in this novel which will be the object of nostalgia later on, suggesting that the series will become darker as it progresses.

My rating: 6/10; not appealing to me as much as Reynolds' earlier work.
Posted by Simon McLeish at 18:32 No comments: 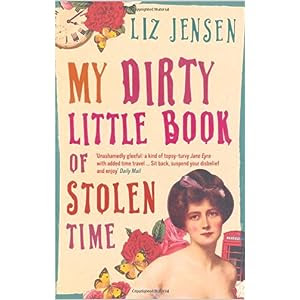 
If the title did not warn the reader, the first sentence's appropriation of the famous opening to Rebecca would make it clear that My Dirty Little Book of Stolen Time is not going to be entirely serious. It is a personal history, told by Charlotte, a prostitute from late nineteenth century Copenhagen. When times are hard, she manages to inveigle her way into a respectable house as a maid, only to be accidentally catapulted into twenty-first century London bye the HG Wells-style time machine hidden in the basement.

My Dirty Little Book is broad comedy, sometimes even cruel (Charlotte's treatment of the dim overweight woman who accompanies her is a case in point). But it is still very funny. In fact, I was reading it alongside a P.G. Wodehouse I hadn't read before (The Girl in Blue), and Liz Jensen held her own even in this company. Few indeed will be those readers who follow Charlotte's exhortation in a time of adversity to return the book in disgust to the shop or library from which it was obtained.

I have tagged this review as science fiction because of the time travel element, though one of the reviews quoted on the cover describes it as "less science fiction than fairy tale", which is in many ways true. I don't have a tag for fairy tale currently, but I actually think that science fiction is the right genre in which to place this book (subsidiary to humour, which is obviously its main point). My feeling is that Tom Holt and Terry Pratchett are readily filed under science fiction or fantasy, because the genre themes and ideas are important elements in the structure of their books, provide much of the humour, and are the subjects of parody. Not only that, but the detailed nature of the genre elements is frequently given in some detail and is important to the story: dragons in The Colour of Magic (to pick one example) are not just fairy story beasts with no explanation, but projections of a human belief in dragons and a parody of Anne McCaffrey's Pernese dragons. And I think that all these criteria hold for Liz Jensen's book as well. Time travel is essential to the plot and the humour; there are moments of genre parody, particularly of H.G. Wells; the time machine itself is analysed further (there is even some discussion of the famous grandfather paradox). In fact, the nature of the fuel which propels the time machine is the closest that My Dirty Little Book comes to having a serious point, consisting as it does of three liquids embodying the struggle of history (blood, sweat, and tears), mixed with that more comical essential lubricant, strong alcoholic spirits.

The plot of My Dirty Little Book is farcical and not particularly important, except as the means by which the humour is generated. This mainly takes the form of Charlotte's observations of the worlds of both time periods. She is a most lively storyteller, occasionally a little too keen to address the reader directly, perhaps, but certainly an individual and entertaining voice. The amoral narration and humorous twists and turns of Charlotte's exploits made me think of Harry Flashman, not a bad model for this sort of comic novel.