Michael Moorcock: The Vengeance of Rome (2006) 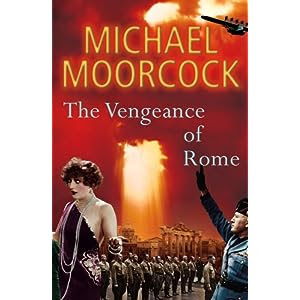 After twenty-five years, the final volume of the Pyat Quartet has now at last appeared; it has spent almost all that time listed at the front of Moorcock's publications as "in preparation". The quartet as a whole must rank as one of the most ambitious novel series of the period, as well as one of the most slowly written; not content with being a historical narrative of the first half of the twentieth century, Moorcock has immersed himself in the repellent personality of Maxim Pyat and produced a study of how such a person appears to themselves while making it clear how others perceive them at the same time.

The story of The Vengeance of Rome takes Pyat from a fugitive in Morocco - the ending of the previous volume - to friendship with Mussolini in Fascist Italy, and then close links with the Nazi hierarchy in thirties Germany (extremely close in some cases), through imprisonment in the camp at Dachau to eventually meeting the young Moorcock while running a second hand clothes shop near Notting Hill in the sixties.

Like many historical novels, a lot of the fascination in this series lies in the way in which Pyat's story is threaded into the major events of the time. Though the most obvious counterpart to the quartet may seem to be George MacDonald Fraser's Flashman series, the tone here is much more serious, and Pyat's character and role in history are both far more ambiguous. At the heart of the whole series, and emphasised particularly in this final novel, is the conflict between Pyat's anti-Semitism and his appearance: being constantly taken for a Jew is not a good thing in thirties Italy and Germany.

The conceit of the series is that the novels are in fact memoirs edited together by Moorcock from Pyat's papers and memories of conversations the two of them had. There is an introductory page, which suggests that the main task of the (fictional) editorial hand has had to try to harmonise conflicting accounts. One of the usual characteristics of Moorcock's fantasy genre writing is that he positively revels in incompatible versions of stories; this is particularly clear in the recent Second Ether trilogy, each of which treats incompatibility in a different way. So this is a somewhat ironic statement, one of many in The Vengeance of Rome of various different kinds.

One of the most interesting of these, because it reveals a lot about the character and the author's attitude to him, occurs when Pyat is interrogated by the SS about his career as an inventor: "I invented it all", he says, apparently without realising what this suggests about his history; and yet Moorcock also states in the introduction that he found corroborating evidence for many of the incidents that initially seemed most fabulous; this is clearly a deliberate contradiction. The reader, of course, knows that this is fiction, but it is being presented as true as any memoirs - with hints like this that it is at the very least, significantly embellished.

Moorcock fans may have wished to see the quartet completed more quickly, but there are obvious reasons why the novels would be difficult to write (and those obvious reasons may not of course have affected the author, no matter how strongly the novels may suggest them). These are the requirements of historical research and the repellent personality of Pyat already mentioned, together with the difficulty of writing from the point of view of an individual whose opinions in almost every subject seem to be diametrically opposed to those of the author. (Moorcock's own views can be read in the essays in The Opium General, for example, or on his website, Moorcock's Miscellany - currently down after attacks by hackers, an event that is itself something of a commentary on his views.)

It is possible to see the Pyat quartet as a sustained attack on racism. Indeed, the idea that an anti-Semite is so unable to see that Jewish people are just as human as he is leads him to be unable to perceive his own Jewishness is a barbed comment on the stupidity of such a view. But there is much more to it than that, and ranks as Moorcock's literary masterpiece, as The Dancers at the End of Time is its equivalent in the science fiction genre.
Posted by Simon McLeish at 11:17 No comments: