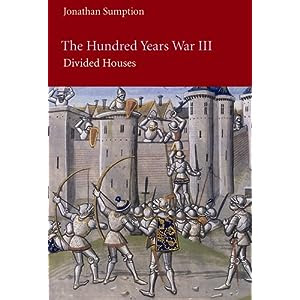 The third volume of Sumption's brilliant history of the Hundred Years War has finally appeared, almost twenty years after the first. It covers thirty years, 1369-1399, a period which saw a weariness from the war arising in both France and England, and neither side being wholly successful in their endeavours (France doing rather better in this respect, undoing many of the concessions which were made to Edward III following victories in the earlier part of the century). The low key nature of the fighting is one of the reasons for this impression of weariness; the French leaders had decided that the lesson to be had from battles like Crecy and Poitiers was that defeats could best be avoided by refusing to fight large scale engagements.

It was also a period when experienced kings of England and France were replaced by teenagers (Charles VI and Richard II) or became incapable of governing (Edward III and Charles VI), leading up to Henry Bolingbroke's deposition of Richard II at the end of the book. The only really dynamic aspect is that the war spread to other nations, involving Scotland, Portugal, Flanders, Castile and the Papacy, during this period.

The great virtues of Divided Houses are of course shared with the first two volumes. The detailed knowledge of sources both well known and obscure continues, with the best known for this time being Froissart's entertaining chronicles, which were also a source used by Shakespeare for his history plays. This is combined with accessible writing which is not noticeably partisan, unlike most of the more populist histories of the period I have seen, in English or French - the school books which dealt with the Middle Ages in the school I went to described the whole war in terms of the fortunes of the English, for example. The second volume, Trial By Fire, did get a bit bogged down in the tedious details of the small scale but viciously destructive fighting of the "routiers", mercenary captains who doubled as bandits: the activities of almost any single one are representative of the group as a whole. Here, the nature of the war in these decades means that the focus is more on the courtly politics in Paris and London (with side glances to the important centres of the other states involved), and this makes it more interesting to read.

The Hundred Years War was a pivotal period in the history of Western Europe, being highly influential in the development of the early modern states of England and France in particular. In this thirty year period, the change which is most noticeable is the way that the military fitted into the rest of society, a change important enough to receive a special overview chapter interrupting the main narrative thread. On the one hand there were technological changes following the introduction of gunpowder to warfare which would lead to the evolution of new strategy and tactics (eventually making both the castle and armoured knight obsolete in their fourteenth century form and function). The other development was the rise of the man at arms, who became a part of a class of professional soldiers as opposed to the former knights fighting from feudal obligation and often had quite humble origins (to the extent that it was not infrequent for nobles to refuse to be commanded by even the most famous, men like Chandos and Knollys).

Apart from the broad sweep of the development of medieval warfare, the main theme I saw in Divided Houses was just how difficult war was for medieval states, even though it was an exceptionally aggressive militaristic society, where warfare was glorified as the main occupation of most gently born men. Problems with finance, communications, logistics, and (often) poor generalship all made military success that much harder to achieve. When individuals trained in fighting from almost as soon as they could walk perform so badly, it is fairly clear that something is wrong with the training; my guess is that the emphasis was more on individual prowess in skills such as horse riding and hand to hand combat and honourable conduct than on more menial aspects of warfare such as strategy and logistics (itself admittedly made really difficult by the lack of transport infrastructure). And yet, if you can't get close enough to the enemy to engage them, the personal skills are pretty much useless.


Divided Houses details such débâcles as assembling an army to cross the Channel, only to fail to bring together enough ships to transport them before the period the soldiers were contracted for ran out. Armies were dispatched to meet an enemy force which was somewhere else - often a problem caused by the weeks it could take for accurate news of the current situation to travel between France and England. Campaign lengths were drastically underestimated, with the result that many soldiers had no pay after the first installment; a recipe for rebellion and pillage of local communities (sometimes even supposedly friendly ones). It was hardly surprising that it became harder and harder for the English kings in particular to persuade Parliament to grant the special taxes needed to fund a campaign. (It was easier in France, because most of the fighting happened there, which was a huge persuasive force in itself.) Of course, military incompetence is not restricted to any one period, and some wars (the First World War, or the Crimean War, for example) are notorious for it. So maybe the nobles of the fourteenth century were not surprisingly bad at warfare...

Another excellent volume in what must be among the largest medieval history projects ever undertaken. Another two or three volumes to go - but hopefully not another twenty years! My rating: 9/10.