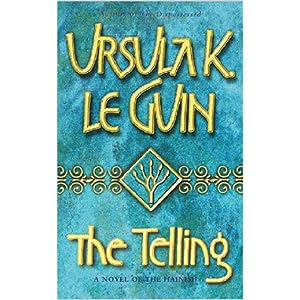 All through here career, Le Guin has been known for her thoughtful social science fiction, as far removed from the "hard" SF which focuses on engineering and physics as anything in the genre. While her earlier novels like The Left Hand of Darkness are classics which helped establish that science fiction doesn't have to be about technology, the more recent The Telling is a comparitively minor novel in much the same vein.

The setting is a technologically primitive planet - a favourite choice of location for Le Guin. Using a familiar device from earlier Hainish tales, the central character is an anthropologist-like observer named Sutty. She is sent to this planet, only to discover it has radically changed from the information she read before her journey (which took seventy years, local time, because of relativistic effects). The society she studied, made up of peaceful beings who had no real concept of foreigner (or at least, so the narrative states, though there is also a suggestion that one group was regarded as "barbarians"), has been overthrown in what must be a deliberate reflection of the effects of the Chinese invasion of Tibet. The old books, and even the writing and some of the language are banned as reactionary. Sutty thinks at first that she, an alien, might be the only person on the planet able to read the old letters until she goes away from the cities into the mountain foothills where the remnants of the culture are still clandestinely preserved.

Why is this a minor Le Guin? The main reason is that it re-visits themes previously explored with greater subtlety. It is all too obvious that the reader is meant to sympathise with those trying to preserve the remnants of the old culture, and the details put in to explain why the authorities want to stamp it out are perfunctory and unconvincing. (This is partly because the main motive for doing so is kept for a surprise until the end, which is something of a plotting mistake.) The ideas used in The Telling could have been the basis for something more interesting; theere is more to the real world events than is picked up by the author, and there are additional reasons for cultures to die out in the face of new technology which we see all around us in the world today that could have filled out the somewhat perfunctory plot. No one ever suggests that the (to me rather dull) folk tales that make up the oral culture at the centre of The Telling (and provide the name for the novel) are boring or irrelevant - yet that has been the fate of many traditional ideas in the MTV generation. Those on the side of the authorities are portrayed as humourless ideologues, straight out of Orwell; one of them does have a change of heart, but it turns out that he was brought up in the old ways. There are reasons that persuade people to embrace technology, and to be a fully rounded person does not necessarily mean rejecting anything new; but that is Le Guin's implication here.

There are other aspects of The Telling which could be criticised; too much space is given to expounding the traditions at the expense of plot and character: an equivalent to being a hard SF novel which concentrates on the technical gimmicks at great length and a fault that Le Guin has always tended towards. But I did not actually dislike The Telling. It is beautifully written on a sentence-by-sentence level, and captures the attention. What is frustrating is that it could be much better.
Posted by Simon McLeish at 09:22 No comments: 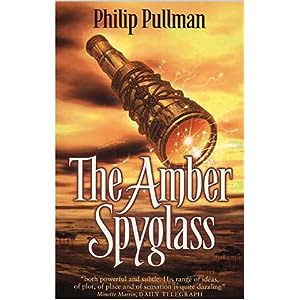 As anyone who has read my reviews of the earlier novels in the His Dark Materials trilogy will know, I am not a Philip Pullman fan. I did feel, though, that I should make an effort to get to the end of this series, as so many people rave about it. I had hoped that this would be a more interesting read, and I would finally begin to care what happened to Will and Lyra.

The novel starts with Lyra in a magical sleep in the power of her mother, while Will (and others, who are more sinister) search for her. Lyra asleep is a much more interesting character than Lyra awake, and this section is probably the best written of all three novels. But soon she is wakened, and from that point she and Will are questing through the worlds accessible with the knife (see The Subtle Knife) and the dullness returns, giving me an almost irresistible urge to skip large chunks (I only didn't because I was intending to write this review).

Pullman has frequently and loudly complained about the Christian symbols in C.S. Lewis' Narnia stories. However, the way that Lewis approaches his symbols seems to me to indicate a much greater writer and storyteller, regardless of his religious convictions. He subordinates the external ideas to the demands of his story (for example, the parallels between Aslan and Jesus are less exact than critics would make out). Pullman's ideas, on the other hand, seem far more important than any story-telling, and his symbols are clunky and irritating. They also tend to be pointed out very directly by the author - as when he describes the meaning of the knife towards the end of this novel. I don't really mind what the purpose symbolic objects hold in a work of fiction, as long as they're well done and their meanings contribute to the strengths of the novel. This is not the case here, and they just become intrusive, making the reader unable to ignore the fact that there is some kind of agenda behind what they see on the page.

My basic objection to this entire trilogy is that it is extremely dull. It certainly reads more like the kind of thing adults expect children to like rather than something that will really appeal to most children - a real contrast to Harry Potter. (I've seen lots of adults raving about His Dark Materials - but not one teenage or pre-teen fan.) I'm certainly not intending to read any more Philip Pullman, no matter how wonderful people think his books are.
Posted by Simon McLeish at 10:04 No comments: