DJY86RANF7DX
Posted by Simon McLeish at 08:38 No comments:

Book two of The Book of All Hours continues in the same vein as book one, Vellum. Like that, and you'll like this. Find that incomprehensible (which is quite possible), and this will be the same. (Note that it is a while since I read Vellum, so my description of how the two books relate together might not be entirely accurate.)

The Book of All Hours (the book within the book) describes, controls, or perhaps is, the multitude of universes. In the aftermath of the catastrophic Evenfall, chaos rules; now, everything is fragmented, yet some things remain constant between the different versions of reality. Jack Carter is a revolutionary, everywhere, connected to the metaphysics of the Book. But what is he trying to achieve? Is he even dead or alive?

The story is extremely fragmented, told in an exceptionally allusive style: Michael Moorcock's Jerry Cornelius meets Finnegans Wake. References run from pop culture (The Prisoner, the Sex Pistols, etc.) to ancient literature (a performance of the Bacchae as political satire by a commedia dell'arte troupe forms the structure of a long section of the novel, and one of Virgil's Eclogues is used in a similar fashion in the epilogue) to folklore (Puck, Reynard the fox). Theological discussion rubs shoulders with a thriller set in the thirties Middle East. Overall, it is a scintillating cascade of ideas, images, and styles.

Like other books of this kind, however, the narrative is hard to follow, particularly if you are a reader who wants to have a linear plot. It is also true that parts of the novel work better than others. (At least, it appeared to be the case to me, both here and in Vellum, but is could just mean that my concentration levels fluctuated.) It is likely to make more sense a second time around, and a repeat read is definitely something I will do. 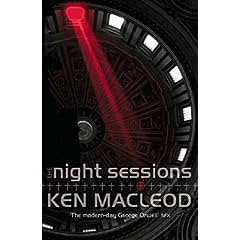 Investigation of crimes which may turn out to be terrorism has become something of a staple for TV crime shows nowadays, particularly American ones. It's partly because of the public concern over attacks, partly because it will involve higher stakes than a simple murder, and partly because it enables the writers to make some political comment (usually critical of the high-handedness of the Homeland Security forces, in the American case). For similar reasons, it has long been popular in books, with the James Bond series providing several examples, and others I can think of going back much further - thirties Saint stories, and even Joseph Conrad's The Secret Agent from 1907.

Ken MacLeod, however, is able to ring the changes on this hackneyed plot through an interesting science fiction background. The motivations for fictional terrorist attacks prior to 9/11 were political, or connected to organised crime. Reflecting public concerns, religious justifications for attacks are now overwhelmingly common in thrillers. The monetary motive is still common (even though it always makes me at least think of camp supervillains and comic book heroes). MacLeod sets The Night Sessions in a not too distant future, where a worldwide secular revolution has purged religious movements of any involvement in politics, leaving (in a generation) the practice of religious belief a private, almost shameful, activity. So it is a great shock to the Edinburgh police when a Catholic priest is murdered in an indiscriminately violent bomb attack, and the feeling that this is a crime which should be extinct is expertly conveyed by the author. It even takes them some time to discover that the victim is a priest, as religious titles are not used in public any more.

There is perhaps a certain implausibility in the idea that religion could cease to matter in politics in the near future, even if there is a huge tank battle at Megiddo (the place which gave us the word "armageddon") where the use of tactical nuclear weapons renders, as MacLeod puts it, the question of who should live in Israel/Palestine moot for decades. After all, religion and politics have been entwined since the earliest written history, of Mesopotamia and Egypt; the first recorded rulers were priests or considered divine. Religion and arguing about religion seem to be a necessary part of human nature, like it or not. The religious theme is well thought out, including a critique of the idea that every word of the Bible is literally true that I had never seen before.

There is a similar implausibility in some of the politics in MacLeod's previous novels, particularly the anarchist states in the Fall Revolution books. But they are well thought through, so as backgrounds to novels they are excellent, giving an interest beyond the more mundane background of those science fiction novels where the setting is just today's world with some futuristic technology. This is less common than it was in the past, when there were quite a lot of stories in the genre which were really just about the tech.

Generally, I read two or three books at once, swapping every couple of chapters or so. The books I was reading alongside this - Mary Stewart's The Gabriel Hounds and Alastair Reynolds' Revelation Space are both ones I had read at least twice before, but even so The Night Sessions grabbed my attention unusually strongly: I kept on reading rather than changing to one of the other books. Even with novelty playing a part, this doesn't usually happen. I would rank this novel as one of Ken MacLeod's best, alongside the Fall Revolution series. My rating: 8/10.
Posted by Simon McLeish at 07:46 No comments: