I borrowed this book from the library expecting to hate it. Even though I didn't like the end of the Hitchhiker series as it stood at Douglas Adams' death, I couldn't imagine anyone else continuing it in the way that he might have been able to (if he'd overcome the blocks he experienced in the later part of his writing career). I'd also read Artemis Fowl, which made Colfer's name, and didn't think much of it.

And, when And Another Thing... came out, it was serialised on BBC Radio 4 as an audiobook, and I listened to that and did indeed hate it. Hitchhiker was always hilarious, and the abridged version - 340 pages in 75 minutes which I'd estimate means leaving out 75% of the text - failed to raise a smile. Of course, that could have been the cuts ("let's leave out the jokes to keep the plot comprehensible"), or the way it was read (not Steve Mangan's finest hour and a quarter), or some of the plot decisions (the way Colfer got out of the problems caused by the ending of Mostly Harmless seemed trite and unconvincing to me). Would the book itself be more worth reading? Friends who might have read it turned out not to have done. So, there was only one way to find out...

Initially, my reaction was positive. At greater length, the unravelling of the finality of the ending of Mostly Harmless, while still not very imaginative, worked better and contained some amusing touches. But things do go downhill from there. Some of the issues are with the characters as created by Douglas Adams. I have always found Zaphod Beeblebrox verging on being more irritating than funny, and Colfer makes him a particularly important character here and he becomes an annoying manipulator of the plot: more self-centred than ever. Wowbagger, the immortal being who is insulting every being in the universe in alphabetical order, also turns up and is made a major character: Colfer's attempts to make him more than the brief joke he is for Adams make him at least as unsympathetic and irritating as a dealmaking Zaphod. And finally, Colfer seems to share Adams' interest in Norse myth, and a lot of the book (even more in the radio abridgement) is about Zaphod's dealings with Asgard - all very dull compared to the meeting with Thor at a party in Mostly Harmless.

All this could be forgiven if And Another Thing... had turned out to be as funny as the first few Hitchhiker books were on first reading. In this aspect, I got the impression that Colfer didn't work too hard, settling for the obvious and poor pun rather than thinking hard about exactly what would be funny. (Apparently Douglas Adams used to agonise about individual words for ages, and this shows in the inventive quality of the first three books in particular.) The way that the book-within-the-book of the actual Guide is handled here is partly to blame for the lack of laughs. The "Book" extracts are among the highlights of the original stories, being extremely funny and often explaining how the bizarre situations Arthur and Ford find themselves in arose. Here, they are intrusive, irrelevant and humourless asides (though it is fairly obvious that Colfer thinks them hilarious). Some attempt has been made to make them stand out typographically, something I don't think Adams ever did, and this, like so much else about And Another Thing... is depressingly unimaginative: the entries are printed in italics. So much more could have been done here to indicate their peripheral nature and liven up the presentation of the book.

Colfer is obviously a fan, and this makes him a good choice as a writer of a sequel. But he is not really very funny at all, even when writing his own books. (I've read Artemis Fowl, and it seems like a good idea - a child evil genius - let down by a lack of imagination and lazy writing, though many people seem to think it extremely funny.) In the end, And Another Thing... reads like a not very wonderful piece of fan fiction, of the sort published in vast quantities on the Internet: and I feel sure that there are likely to be better sequels to Hitchhiker available free at fanfiction.net. My rating - 2/10.
Posted by Simon McLeish at 08:13 1 comment: 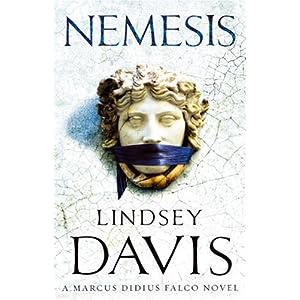 After the (to me) unreadable Rebels and Traitors, Davis returns to the Roman crime series which made her name, with the nineteenth Falco novel, Nemesis. But this addition to the series is much darker than most of them: this is not quite the wise-cracking Falco of old.

The darkness starts right at the beginning of the novel, which opens with the deaths of Falco's infant son and his father. The death of new born children has been a part of life throughout history. Take for example Queen Anne, who had the benefit of better medicine and all the care a British Queen could command at the turn of the eighteenth century, but none of whose fifteen children survived to adulthood. And the death of children plays an important part in novels by writers such as Charles Dickens. Yet it is something which is generally skipped over in modern historical fiction. With larger families and more infant mortality, death was a part of life in a way which, at least in the Western world, it is not today. That of course does not mean that parents then did not mourn the death of their children as much as parents today do.

So Nemesis is really about Falco's mourning for both his son and his father, even if in the latter case he doesn't want to show that he is strongly affected. The plot of the story concerns an investigation begun by Falco when he is looking into an unfinished business transaction of his father's. This spirals into a hunt for a family of serial killers, who seem to be protected by someone highly placed in the Roman government, and it becomes a case which pushes Falco onto a morally darker path than he has yet travelled - presumably because of the effects of his bereavement on his emotional state. He becomes a much more ambiguous hero than usual in this series; no  matter how bad his life became (the episode in which he went undercover as a slave in a mine is a prime example), he always previously seemed to be a basically good person. In hard boiled detective terms, the Falco of Nemesis is more Dashiell Hammett's tainted Continental Op than a wisecracking Philip Marlowe.

Pushing a character to do nasty things because of his own emotional pain is all very well, but after eighteen more or less humorous novels in a series it comes as something of a shock to readers. More points for literary quality, then, but fewer for enjoyment of the story. I'd give Nemesis 6/10 as a result - angst is not why I read Falco novels.
Posted by Simon McLeish at 07:41 No comments: