George MacDonald Fraser: The Light's On at Signpost (2002)

Best known to me as the author of the fantastic Flashman novels, George MacDonald Fraser turns out from this volume of memoirs to have also been involved in the scriptwriting for a number of well known films of the 1970s, and to have had a lot of strongly held opinions,  both of which he was able to write about in an interesting if sometimes irritating manner.

The wildly diverse material in this book is helpfully divided into appropriately titled alternating sections, either Shooting Script or Angry Old Man, with Interludes - comment difficult to fit into either category - interspersed every so often. This means that the reader with little tolerance for political ranting but an interest in the cinema can read self-admittedly star struck reminiscences of films from The Three Musketeers to Superman and Octopussy; and the Daily Mail-reading UK Independence Party supporter can confirm their prejudices without bothering with the cultural memories. (Even if you agree with everything he says, however, I think that the tone of the latter sections would become wearing after a while.) Reading them both, though, has a jarring effect due to the contrast in tone between vitriolic rage at the state of Britain at the start of the twenty-first century, and affectionate enjoyment of the opportunities to work with a long list of stars. The Light's On at Signpost presents a schizophrenic reading experience, and is hard to enjoy.

Fraser lived at this time on the Isle of Man, and the book's title is a Manx expression. Derived from the practice of turning on a light at the top of a signpost when a rider in the TT motorcycle road race is nearing the end of the final lap, it is used to indicate how near death Fraser felt (though  in the end he lived for another six years, producing two more novels and another volume of non-fiction). The book basically contains the things that he wanted to say before he would no longer be able to, and it has for this reason something of the feel of a series of blog posts. At the end, Fraser describes the book as a "mixed bag", and that is a pretty exact description of what it is. It was interesting to read once, but I certainly won't be picking it up again now that I have. 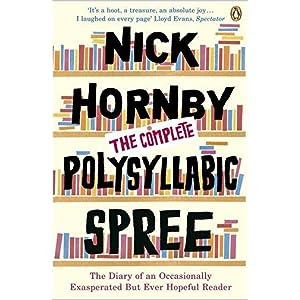 Nick Hornby writes an approximately monthly column for American literary magazine The Believer, entitled Stuff I've Been Reading. The Complete Polysyllabic Spree collects the first three years or so of this column (September 2003 to June 2006), and, even though it is quite a short book, the contents were originally published by the magazine in two smaller volumes; a third has since appeared, according to Wikipedia, so the title is no longer accurate. Not precisely a book review column, Stuff I've Been Reading is basically a short essay about books, themed around whatever Nick Hornby has happened to read (or, in many cases, what he has bought intending to read but hasn't). Its piecemeal nature makes it not as compelling to read in one go as his book on music, 31 Songs, but being Hornby, it is extremely funny and often thought provoking.

I did get tired of the running joke which gives the book its title. Hornby claims that The Believer is run by a cult-like group of individuals in white robes, and names this group the Polysyllabic Spree (a reference, in case you don't know, to the rock group The Polyphonic Spree). The point is that The Believer has a review policy that reviewers should not be overly critical: the point of the journal is to encourage a love of books, not to allow reviewers to make points at the expense of writers. (This is of course paradoxical, making a point at the expense of other literary magazines...)

One of the interesting things to me about The Complete Polysyllabic Spree is just how little my reading and Nick Hornby's reading overlap. I've read a lot, and he's read a lot, but of the hundred or more books discussed here, we have both read fewer than a dozen. Our tastes differ. He has an interest in recent history and political commentary which I don't, while I read a lot of science fiction, a genre which he freely admits is alien to him - he describes reading Iain Banks' Excession, in an attempt to break new ground, but gives up after only a few pages, finding it virtually incomprehensible. (It's probably not an ideal choice as a science fiction starter, being set in an idiosyncratic milieu already well established from the earlier Culture novels, and being written in a way which assumes familiarity which the genre in the reader. Thinking about what he should have read: that's a blog post in itself.) His descriptions have prompted me to look out for three books: Never Mind, by Edward St Aubyn (not itself mentioned, but the first of a series which is), Francis Wheen's When Mumbo Jumbo Conquered the World, and John Carey's What Good Are the Arts?


The biggest problem with The Complete Polysyllabic Spree is that the material in the book was not intended to be read consecutively. It certainly gives the impression that no editing was done to make them fit better into the book format. This means that the overall impression is not as favourable as it would be to reading the columns one at a time, with a month or more separating them, which means that my final rating is 6/10.