Stephen Donaldson: The Runes of the Earth (2004) 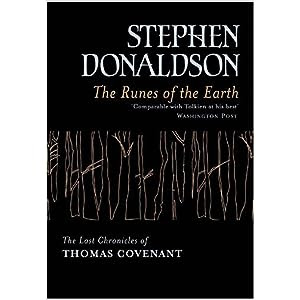 For those who have for a long time now been fans of the original Thomas Covenant novels, the announcement of a new chronicle caused a simultaneous quickening of interest and awakening of apprehension. The latter is not so much a fear that the whole series might be ruined by a sub-standard sequel or one which would become an anticlimactic finale. Interest is raised by the high standard of Donaldson's writing, even though this has not stopped him producing an entire series I find unreadable. Apprehension, on the other hand, is fed by the length of time since the previous Thomas Covenant series (why go back to it now, after twenty years?), and by the seeming finality of the ending of White Gold Wielder.

The story of The Runes of the Earth, like the first part of each of the earlier Chronicles, begins in Covenant's home town. Here, Linden Avery, who was Thomas Covenant's companion on his second quest, has for some years run a psychiatric hospital, whose patients include Covenant's former wife Joan. Joan's son Roger turns up out of the blue, as soon as he reaches his majority, requesting permission to take her out of the hospital and care for her himself. Linden refuses, because something about him makes her uneasy, using the excuse that Roger hasn't gone through the necessary legal formalities needed to transfer Joan to his care, only for him to break into the hospital to kidnap Joan, also breaking into Linden's house and taking her adopted son. As she races to try to retrieve them, all four of them are drawn into the Land, where the evil of Lord Foul threatens the life of that world once more.

There are two major changes between White Gold Wielder and Runes of the Earth. Less immediately important (though in the end it has a major effect on the reader's emotional reaction to the story), Donaldson has toned downed the language he uses quite considerably, both in melodrama - emotive words are now far rarer - and difficulty - rare words are sometimes actually explained. The other change is that Thomas Covenant is not the central character any more; being dead, he is present through memory, through the lengthy legacy of his deeds, and through occasional, ghostly hints given to Linden. She is now the main focus, as she began to become during the Second Chronicles. To be honest, Thomas Covenant may be one of the most important characters in the entire fantasy genre, but to a reader it is really something of a relief to be freed from his obsessing about his guilt.

The new crisis in the Land is somewhat contrived, as might be expected; and I actually felt that the part of The Runes of the Earth set in the real world worked better than the section in the Land. It is less melodramatic, but at the same time less compelling than the earlier Chronicles; over the years, Donaldson's writing seems to have lost some of its excitement and passion. All in all, though, it is not as much of a let down as it might have been, and I'd expect to get more involved with The Last Chronicles of Thomas Covenant in the next volume and find at the end of the third that this trilogy will be a worthy addition and conclusion to the series.
Posted by Simon McLeish at 09:11 No comments: