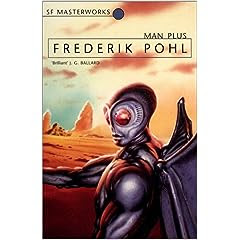 Man Plus won the Nebula award the year before his next novel, Gateway, swept the board of science fiction awards. It could be argued that Gateway is the perfect science fiction novel, because in it Pohl does many of the things which the genre is famous for superlatively: big ideas, interesting (if off-stage) aliens, journeys of personal discovery in intriguing environments, extrapolation of current trends and ideas into the future (in a rather dystopian way); and does it with humour using a flawed central character - a cowardly hero all too easy to identify with. But it does stay well within the traditions of the genre, while the now less well known Man Plus is more adventurous, exploring emotional territory outside the usual comfort zone of genre fiction (of any genre, not just science fiction).

Man Plus is set in what would be the 1990s (during the tenure of the forty second US president, who was Bill Clinton in the real world). But this is a world in which the tensions of the Cold War continued to escalate, and it seems likely (either through all out war between China and other nations or through environmental problems) the earth will become uninhabitable in the short term. So the American space program undertakes a new project: Man Plus. The aim is to get man on Mars, and making it possible for the human race to continue there by re-engineering the colonists, starting with one man.

The central character, Roger Torraway, is not just an experienced astronaut butt one of the best known heroes of the space program, after the rescue of some stranded cosmonauts. He is one of the scientists involved in the Man Plus project, but when the man who is being transformed into a cyborg who can live unprotected on the surface of Mars through a long series of operations has a heart attack and dies, he is the alternate choice who becomes the primary candidate. From this point, the novel is about his emotional reaction to the changes made by the surgeons and engineers to his body, to realising that he is going to part from his wife, and to the philosophical (and theological) dilemmas which the transformation suggests.

From the genre point of view, his transformations effectively make him an alien (indeed, one of the most iconic type of aliens in science fiction: a Martian). Writing about understanding the alien has always been one of the most philosophical aspects of the genre, tied up as it is with questions about the nature of intelligence and humanity. Pohl even finds time for a little James Blish-like discussion of some not immediately obvious theological implications of the transformation process, courtesy of one of the scientists involved who is also a Catholic priest.

One major similarity with Gateway is that Pohl's attitude is not "be amazed by the science", but "how would this really feel?". This is something which marks him out from many of his contemporary science fiction authors, and what led Edmund Cooper, one of his colleagues, to say "In his grasp of scientific and technological possibilities, Pohl ranks with Asimov and Clarke, but he has greater originality than either" (as quoted on the back cover of this edition). Like many genre fans, my earliest science fiction reading was Asimov and Clarke (along with Heinlein), and they remain authors I go back too, despite their flaws as writers. Pohl is a more grown-up reading experience, requiring more engagement from the reader, but offering deeper rewards.

Torraway's elite background and the strangeness of the changes make him a difficult character for the reader to empathise with. (Gateway's central character, Robinette Broadhead, is much more sympathetic - indisputably a man of the people.) Pohl works hard to humanise Torraway though a subplot about an affair his wife is having, but this is one of the least successful aspects of the novel. Parts of Man Plus are disturbing, and others are definitely not for the squeamish. Yet Pohl is able to use his story to explore emotional terrtitory outside the usual boundaries of genre fiction, and this is one of the reasons why it is an important novel. It would be possible to argue that Gateway is the perfect science fiction novel, but it stays well within the bounds of the genre, not challenging what science fiction can do in the way that Pohl does here: more ambitious, but in the end less successful. My rating for Man Plus: 8/10.
Posted by Simon McLeish at 06:38 No comments: