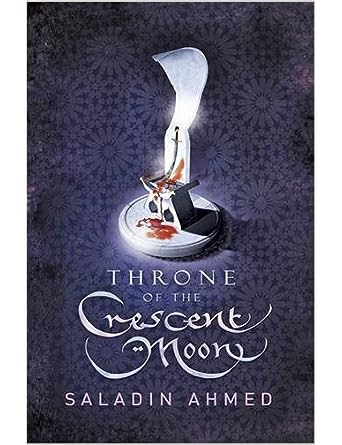 Even in 2013, it is quite unusual to see a fantasy genre novel which draws on a Middle Eastern background, and when you do, it tends to have a background based on the Arabian Nights. Here, though, is an original fantasy which treats ideas from Arab culture in the same way that many British or American writers draw on the western European medieval history, culture, myth, and legend.

The central character of Throne of the Crescent Moon, Dr Adoulla, is a man with a calling. He is, as far as he knows, the last of the fighters opposing the zombie-like magical constructed beings, the ghul. And he is starting to feel his age. With his apprentice, the fervently religious young dervish Raseed, he tracks the ghuls involved in an attack which left a young boy orphaned, The hunt leads them towards a dark secret which threatens the whole realm, though the Kalif is not interested in anything but his own rather unpleasant agenda.

The elements of the plot are not really terribly original, but it is the background which makes Throne of the Crescent Moon a fantastic novel for genre fans - which is why it made the Hugo shortlist this year. The background is not Islamic, though the religious part of the setting is clearly related, and of course it is immediately reminiscent to a Western reader of the Arabian Nights, though again it is sufficiently different not to feel like a straightforward leap into the world of those stories. Most fantasy still follows Tolkien's lead, and has a background derived from western Europe, often in the medieval period, and includes magic related to traditional European legends, such as those surrounding Merlin, or folktales of the faery. Much of the plot may be traditional swords and sorcery, but in this new background, it seems fresh again.

It's important that the background is well done, and placed in the service of the plot, and Ahmed does both admirably. One device which is quite common in fantasy novels, because it affords a means to expose the hard work which went into world building (as well as because Tolkien did it) is to have a group of central characters who between them represent different ethnic groups. Ahmed manages to do this here without it seeming to be a contrived, clunky, cliché - a considerable achievement in 2013.

All in all, an excellent debut, a promising indication that this is a series worth watching. My rating: 8/10.

Posted by Simon McLeish at 20:40 No comments: