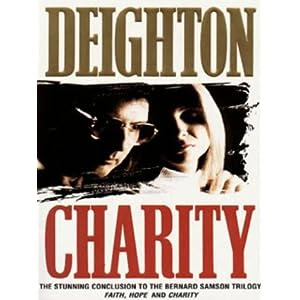 This is the concluding novel not just of the long running Bernard Samson saga but of Len Deighton's fiction as a whole. It brings to a close a series of attempts to deal with the ending of the Cold War - an event with a big impact for an author of spy fiction: different settings tangential to the genre in MamISTA, City of Gold, and Violent Ward, and the story of the downfall of Communism itself in the last trilogy of Samson novels. I suspect that the difficulty Deighton experienced in finding a new theme appropriate to the times was a contributing factor to his stopping fiction writing when he did.

The reader's expectation with Charity is that it will wrap up the remaining loose ends, and leave Bernard and Fiona's future sorted out. Having read Spy Sinker, followers of the series know more about what really happened on the day of Fiona's return to West Berlin than Bernard does - so the big question is really how much does he find out, and how much pain does he bring on himself and those around him by his investigations?

Although Charity is set before the end of Soviet control over Eastern Europe, Deighton makes sure we know what happens after the end of the novel with little ironic reminders - such as describing a falling person as looking "like a toppling statue of a tyrant". The ending itself is rather abrupt; the last chapter comes with something of a jerk. It is really about new beginnings for the characters, starting relationships over again - entirely appropriate, given the huge changes about to impact their world.

Three series characters dominate British spy fiction: James Bond, George Smiley, and Bernard Samson. They are all quite different from each other, even if you could argue that Bernard is very similar to Deighton's earlier Harry Palmer character and something of a mix of the other two. Smiley is all subtle intellectual; James Bond is all brute force action. Bernard does both parts, and this makes him both more exciting to read about than Le Carré's character and more interesting and certainly less unpleasant than Ian Fleming's. More is revealed about Bernard's inner character than about either Smiley or Bond, even though his narration (and neither Smiley or Bond is every allowed the luxury of telling their own story) is written in such a way that it is clear that Bernard is hiding quite a lot. This of course makes him more believable as a character, as does the way that his powers as an intellectual spy master and an action hero are both carefully limited by Deighton, presumably to this end. The series (ten novels in all, including a prequel not involving Bernard personally) is a substantial body of work, intimately connected to the fall of Communist East Germany and thus a major fictionalisation of some of the most important historical events of the last half century.
Posted by Simon McLeish at 16:13 No comments: 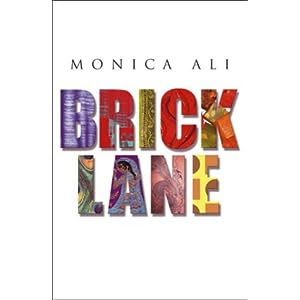 Since the success of Midnight's Children, there have been quite a few novels about the Indian subcontinent; but there are not so many about the experience of the immigrant community in the UK (or at least, not so many that are well known). The most obvious writer to compare Monical Ali to is Hanif Kureishi, but his novels portray very different people. Brick Lane is about the poorest of Bangladeshi immigrants, living in a rundown Whitechapel housing estate, one of those places where each block seems to contain large numbers of people originating from the same village, huddled together as a way to shelter from the strangeness of urban London.

Nazneen has been sent over from Bangladesh in the early eighties to make an arranged marriage to a much older man, but one who prides himself on being advanced and modern (unlike some of the men, who hardly allow their wives to leave the home). Brick Lane is about how she comes to terms with the city, taking her story right up to the time of writing. Nazneen's life is compared with that of her sister, who remained in Bangladesh and who had a much harder time.

Brisk Lane is a much praised bestseller for a debut novel, and yet I did not feel it was as good as I expected it to be. Life in these estates is pretty grim (as I saw when I was a student in the area, and as I am sure Monica Ali knows full well). There are difficult times for the novels's characters - it climaxes in a riot - but they always seem to be more at arm's length than they should be. The setting is nothing like as bleak and certainly not as expressively conveyed as Zola's Paris, for example. This is partly because description in this novel is very sparse; Ali is concerned with Nazneen as a character to the exclusion of everything else, and she is (for me) too placid and passive to carry the novel. The subject matter is perhaps one reason for the success of Brick Lane - it's very much the sort of thing that is bound to be praised by the majority of the liberal community, and it obviously struck a chord with many readers. It didn't work so well for me, for some reason.
Posted by Simon McLeish at 14:44 No comments: 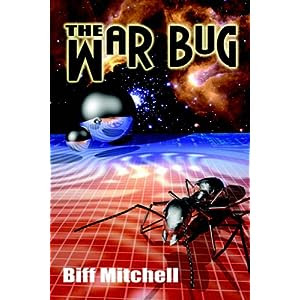 There are two, clear, parallel trends in modern computing. One is that the virtual world is going to become more like the real one, in the sense that it will be possible to deceive human participants into perceiving it as though it were real: like the virtual world of The Matrix, internally consistent and believeably solid, yet containing possibilities beyond mundane physics. No illusion destroying tools like keyboards in the way; and no system failures. On the other hand, reality is becoming more like the virtual world, as computers take over more and more (gadgets like Internet connected fridges which eliminate the need for food shopping, for example), and interfaces become smaller and more invisible and intuitive. The War Bug is set in a future in which reality and virtual reality are almost indistinguishable, in which most individuals live complex virtual lives more satisfying than their real existences, interacting with the avatars of other real people and constructed virtual personalities. There are two big hurdles, one legal, and the other technical: the Reality Laws prohibit the construction of a virtual personality which pretends to be real; and no one has yet managed to endow a virtual personality with true sentience. The plot of The War Bug concerns a man who has created a virtual family, a wife and daughter, who are somehow true people and who can convincingly persuade others of this (though Mitchell is more vague about the definition of sentience to link it to this kind of Turing Test like view; he seems to indicate more that it is the ability to carry out introspection). When his secret is discovered, all three are put in great danger from powerful people who control the online world, who want to exploit computer sentience for their own ends. At the same time, an extremely sophisticated computer virus, the War Bug, is beginning to destroy whole virtual communities - how is this, which appers to Abner as a huge pig, connected to his work and his family?

There is one immense hurdle to reading The War Bug, and that is its style. It is extremely colloquial, relentlessly quirky and often exceptionally irritating. The prose gives the impression that it is the act of a strange stand-up comedian. It is well worth keeping going, though, and the style is reasonably appropriate to the content. (I can see that other people would possibly find it amusing, too, but it is not a form of humour that greatly appeals to me, and as a joke it goes on far too long - a criticism I also often feel is applicable to stand-up comedians as well.) The informality of the prose is so great that it presents something of a paradox: it is written in language so colloquial that it becomes hard to read. The chapters are very short, and jump around a lot, which means it takes a long time to understand what is going on and to get a feel for the main characters. Some editing would have been useful here, particularly of the background presented in the very first pages, which nearly persuaded me not to continue.

In some ways this is basically a criticism that certain aspects of this novel are not to my taste; other readers may well love the way in which The War Bug is written. Once I did finally get into it, I found the story fascinating; it deals with philosophical ideas that have interested me for a long time, ones which could be said to be basic to the (intelligent end of) the science fiction and fantasy genres: the nature of reality, and the nature of humanity. The story suddenly becomes gripping at the point where Abner's family is kidnapped by powerful individuals who want to obtain the secret of sentience, in a way that the destruction of the virtual cities and even the deaths of thousands whose avatars were caught up in their ends had not been. Though many of the ideas are not particularly new (reference points include the obvious Gibson and Stephenson, but I felt that there was also a strong kinship with the drug induced virtual worlds of Stanislaus Lem's The Futurological Congress), it is well done and the background shows that Mitchell is a writer with at least some ideas of his own.
Posted by Simon McLeish at 14:36 No comments: