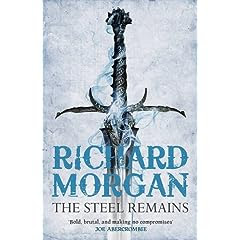 From brutal science fiction, Morgan moves to brutal fantasy with The Steel Remains, first in a new series.

The novel doesn't read as the first in a series, and has an extensive back story: the three main characters played important parts in the victory of the Empire over the Scaled Folk (dragons), leading to what is expected to be a period of peace. Each of them returns home, Ringil to living in an inn, trading on his fame for food, a room, and sexual partners, Egar to become clan chief of his remote northern tribe, and Archeth to become a close advisor to the Emperor. Each remains abivalent at best about the Empire and none are really accepted into the new lives they choose to live. But things change, and the three are jolted out of their effective retirement, eventually realising that the Empire is under attack again from the dwenda, thought by most to be a myth.

As the Takeshi Kovacs novels fitted into the flow of science fiction, so too does The Steel Remains fit into the flow of the fantasy genre. It is reminiscent of highly praised work by authors such as Stephanie Swainston and Joe Abercrombie (who provides the endorsement printed on the front cover, and whose First Law trilogy is very close in tone and world building to The Steel Remains). This is not heroic fantasy, but about seriously flawed individuals who just happen to be talented in particular ways that are useful at the time they happen to live. No one is nice, no one is noble, no one is honourable. Of course, because the novel is written from the point of view of Ringil, Egar and Archeth, the reader comes to sympathise with their points of view if not to particularly like any of them.

While the character of Takeshi Kovacs combined with the idea of resleeving to make Altered Carbon a novel with interesting innovations, this cannot be said of The Steel Remains. It fits well into the current fashion without standing out particularly. The writing is good, and I especially like the way that there is so much background that is effortlessly introduced. It will be interesting to see where the series goes, and I enjoyed reading it. As with the other writers mentioned earlier, and Morgan's earlier science fiction novels, The Steel Remains is not for the easily offended or squeamish; nor indeed is it for those looking for gentle fun. My rating: 7/10.
Posted by Simon McLeish at 06:45 No comments: 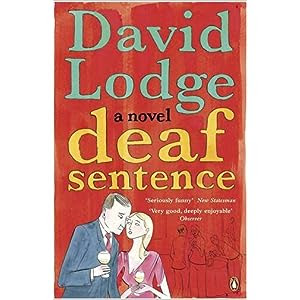 The title by itself makes a lot of what Deaf Sentence is about clear. That it is about deafness, how it feels to gradually lose hearing, how deafness imprisons the sufferer in a solitary world where old pleasures become impossible or difficult; how there will be humour in the story; and even that the grim pun deaf/death (also, of course, a pair of words a deaf person would find hard to distinguish) will be revisited throughout. The use of part of the definition of the word "sentence" from one of the Oxford English dictionaries in the front matter to the novel also indicates before starting that the various different meanings highlighted in the quotation will form themes in the story.

Desmond Bates, narrator of Deaf Sentence, was a professor of linguistics who took early retirement when a good offer from his university co-incided with the realisation that encroaching deafness was causing obvious and embarrassing difficulties with lecturing and teaching. In the first chapter, he has an entire conversation at an art gallery party with a young woman, Alex, even though he is hears only a tiny part of what she says over the background noise of the party - distinguishing foreground from background being one of the problems which deafness brings. Later, he discovers that he appears to have agreed to supervise Alex's work on a doctoral thesis on suicide notes as a genre of linguistic utterance. But each meeting he has with her is increasingly bizarre, and she seems increasingly unstable...

Deaf Sentence is a typical David Lodge novel (unlike his previous work, Author, Author): funny, clever, full of satirical observation of academic life. There is also sadness, partly because of Desmond's feelings about his deafness, and partly because of his relationship with his irascible nonagenerian father. This is not a novel which paints a pleasant picture of what it is like to be old.

The centrepiece of the novel is not really up to his usual standard, however. This is a set piece description of the ordeal of the family Christmas, made worse by Desmond's hearing difficulties. This seems, unfortunately, to have escaped from a seventies sitcom and is not really imaginative enough to hold the novel together as it should given its prominence.

The main observation that Lodge makes about deafness through the novel is that it's tragic for the sufferers, but can often be comic for those around them, because of the misunderstandings it generates. He makes the contrast with blindness, which evokes pity and sympathy from onlookers, rather than laughter, embarrassment and irritation. And there is something undignified about even the most modern battery powered hearing aids (especially as users find it difficult to ensure that they have replacement batteries and do not let those in use drain too quickly), which there is not to the white stick or guide dog.

Not Lodge's best (Changing Places, Paradise News, or, on a more serious note, Thinks... would be my choices there). But Deaf Sentence is still thought provoking and funny: well worth a read. My rating: 7/10.
Posted by Simon McLeish at 06:04 No comments: 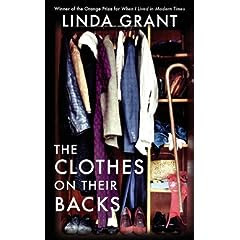 The 2008 Booker Prize short list has once again proved dull, to the point that this, the fourth I have started, is the only one I have so far bothered to finish. As well as being an enjoyable book from the short list, it also falls into another small category, Booker-short-listed-novel-not-tapping-into-British-post-colonial-guilt. True, it does have immigrants as characters, but they're wartime Hungarian refugees, not from the former Empire at all.

Vivian Kovaks grows up in a central London flat, rented for a song by her parents who originally offered it as charity to a pair of refugees,not expecting them to stay for forty years. She, as narrator of the novel, describes her parents as mice seeking to bring her up as a mouse. A sheltered childhood, followed by study at York University, then marriage.

But there's what might be called an "elephant in the room". Vivian's uncle is Sandor Kovaks, who is a successful businessman; the problem is that his wealth is based on being an exploitative slum landlord, also in London. The character is based on a real person, Peter Rachman, who I vaguely remember reading about (probably in a much later Sunday colour supplement magazine). Vivian's parents won't admit to the relationship, but Vivian remains fascinated by her one childhood memory of her uncle, from the only time he visited their flat. Sandor is imprisoned when she is about ten, but she later meets him again, and the second half of the novel is really about her discovering what the man behind the tabloid horror stories is really like.

The major difference between Sandor Kovaks and Peter Rachman (ignoring the fact that Kovaks is fictional while Rachman was real) is the existence of living, known family members. Rachman too came from Eastern Europe, and after the war was unable to trace his family, though he continued to try to do so until his death in 1962. (Grant also has Kovaks live a great deal longer.) Sandor's brother and his family are useful inventions to the author, as it makes it much easier to explore his character through the complexities of the relationships between him and them - relationships which still exist, even if they have disowned Sandor, even changing the spelling of their surname by deed poll so that strangers will not ask whether they are related.

The story is told in a way which is quite complicated chronologically. The first chapter and the last chapter are set much later than anything else (and are obviously intended to be from the time at which the narrator is telling the story). In the rest of the novel, Vivian apparently adds details from her childhood or illustrative incidents from later in her life as they occur to her, prompted by details in the main flow of the story. And the central part of the novel is taken up with Sandor's life story, which reaches back before the war, long before Vivian was born. But it all rings true, because it is carefully put together so that it mimics the way that people tell anecdotes in real life. Deliberately creating this kind of simplicity through underlying complexity is a skill I admire greatly.

The point of the novel, if there is one, is about the way that people's personalities are reflected in the small details of their lives such as the clothes they choose to wear. (It is exactly the sort of incidental information that creative writing courses suggest using to establish character, because these details are much more telling than a direct description of traits.) Clothe are important in the novel particularly Vivian's trawling of second hand shops to put together a wardrobe of old fashioned but stylish outfits: retro chic long before its time, and the description of how Sandor, forced to work in a slave gang of Jews in Nazi-occupied Eastern Europe, is never able to change the clothes he was wearing when first conscripted, for months and months.

It's not a happy story; no novel in which the narrator's husband is killed on the second day of their honeymoon could be described as such. But it is a pleasure to read The Clothes On Their Backs, which is in summary an excellent novel, something out of the usual way of things. Both Vivan and Sandor are fascinating characters, and the view of life in thirties and forties Europe is one not often encountered in novels by English writers. My rating: 8/10.
Posted by Simon McLeish at 06:50 No comments: