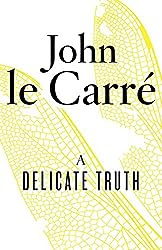 It's a while since I last read a John le Carré novel, and I picked this up in the local library a little reluctantly, because I felt that his world was often too downbeat for me to enjoy reading his work as much as I felt I should - very well written, provocative, but depressing.

A Delicate Truth is the story of the aftermath of a secret and rather shady operation, a collaboration between British military and a US security firm, organised outside normal security services procedures by an ambitious government minister. The operation is described in the first section of the novel, and the fallout from it returns to haunt some of those involved through the rest of the book. The main character is Toby Bell, who was the minister's private secretary at the time of the mission and was excluded in a manner which made him suspicious. The focus is on Bell's attempt to understand what has happened and to act in accordance with his conscience, not in the way which sustains the cover up.

The ideas of the novel are clearly inspired by the Wikileaks saga and the cases of Bradley (now Chelsea) Manning and Edward Snowden. Several of le Carré's earlier novels, especially The Constant Gardener, The Mission Song, and A Most Wanted Man have done the same thing, but this is the first time where a UK setting has been used to give the novel more immediacy to what I would assume is the author's main audience, his compatriots.

Although the operation is not an official one, and the background is post-Cold War, I found A Delicate Truth reminiscent of le Carré's Smiley novels as a reading experience, more than it is of the recent works already mentioned. This is not the only reason; le Carré's spy fiction has often had matters of conscience and honour at its heart, and these themes play a large part here too. I did feel that this resemblance does make it clear that A Delicate Truth is overshadowed by the Smiley novels - not surprisingly: there is a reason why they are classics of the spy thriller genre.

A thoughtful novel, raising concerns about the actions taken against whistleblowers by those in authority. Though readable, it is a step down from le Carré at his peak. My rating: 7/10.
Posted by Simon McLeish at 18:54 No comments: