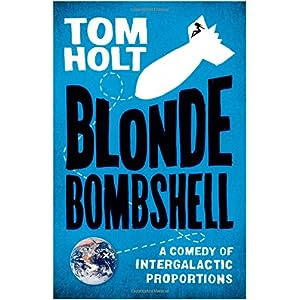 Tom Holt's latest novel seems to follow in well trodden footsteps. An advanced alien civilization finds itself threatened by the Earth's broadcasts through space, as music (not a concept previously known to them) is addictive to the Ostar. They send an intelligent bomb  to destroy the Earth, only to loose contact; Blonde B ombshell concerns their second attempt,  to find out what the Earth's hidden technology which put paid to the first bomb could possibly be, and carry out the destruction mission. All gung ho, the second bomb arrives, and sends down a probe, putting a copy of its mind in a human body created for the purpose. While it realises that "Mark Two" would not be an acceptable name for human culture, it decides that "Mark Twain" would be - a slight variation on the choice of "Ford Prefect" as the name used by the alien guide researcher in The Hitch Hiker's Guide to the Galaxy (albeit one which is likely to go out of date less quickly).

Holt's writing generally relys on characters who are fish out of water to provide much of the humour, and Blonde Bombshell is no exception. Here, there are both machines trying to pass as human and the Ostar relationship with people: they are shaped like dogs, and keep pets who are like humans, and the inversion is a natural source of jokes. But the jokes are all essentially the same, and this lack of variety palled for me quite quickly. In essence, the problem I had with Blonde Bombshell is that I didn't find it very funny. Some Tom Holt books do strike me this way, including Wish You Were Here. This one is not as bleak, being instead a tired repeat. 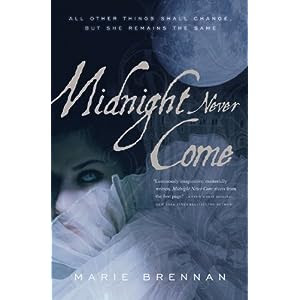 The Elizabethan age was obsessed by Faery, something most famously seen in several Shakespeare plays (A Midsummer Night's Dream, the spirits in the Tempest, the Queen Mab speech from Romeo and Juliet, and the pretend fairies in The  Merry Wives of Windsor being just some of the best known examples), but most developed in Spenser's enormous allegory The Faery  Queen, which parallels Elizabeth with the queen of the Fae herself.

Folklore graduate student Marie Brennan has taken this thought and put together a story  of a connection of a different kind between the two queens, a pact which guarantees the security of the English realm and its fae reflection. But it is not a treaty without cost, and the queen's spymaster Francis Walsinghamn has begun to suspect that tere is an unknown player in the game with direct access to Elizabeth. He chooses one of his agents, William Deven, to investigate, knowing that the young man is already more involved than he realises: Deven has been courting Anne Marston, waiting lady to the Countess of Warwick, and known to Walsingham as a likely agent of this unknown power. And indeed Anne is a  glamour put on by Lune, a lady of the Fae Onyx court below London, to appear human so she can act as a spy for Invidiana, the Onyx Queen (the name meaning "hateful", as opposed to Elizabeth's allegorical name Gloriana, "glorious").

Atmospheric, interesting and with good characters, Midnight Never Come is well worth a read. I don't normally like books based on role playing game scenarios (I probably wouldn't have read it if I'd realised it was before borrowing it from the local library). It's biggest problem for me was the title, which comes from a play by Marlowe and which in context gives away important aspects of the ending. My rating - 7/10. 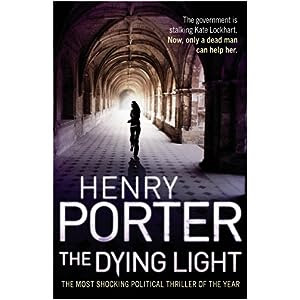 Henry Porter's fifth novel is intended, so the author tells us in the afterword, to fulfil three purposes. It is obviously a thriller readable as a standalone story, but is additionally intended as a contrast to his previous novel Brandenburg and as something of a political call to arms. It is set in a near future Britain, where high-powered lawyer (and former spy) Kate Lockhart returns to the country after several years working in the States for college friend David Eyam's funeral. Eyam, was a civil servant involved in security at the highest levels, but he resigned and hid himself in a tiny town on the Welsh borders before making a sudden trip to South America to be killed in a terrorist bomb attack. Kate is told that she is Eyam's heir, completely unexpectedly; and when Eyam's lawyer is killed by a sniper driving down an English country lane and she discovers that child pornography has been planted on Eyam's computer to discredit him, she realises that she has inherited not just his possessions but a dangerous secret worth many deaths to those who wish to keep it hidden.

From this point on, The Dying Light is a political thriller with a conspiracy theory at its centre, set in a dystopian Britain in which every move is watched by the authorities. The development of the systems which allow this and the accompanying erosion of civil liberties are Porter's main concern.He mentions the way in that events he was describing as he wrote the novel turned out to be true as he was writing, not a comforting prospect for someone writing a dystopia. Most of Porter's work has made me think him the natural heir to Len Deighton; but the campaigning nature of The Dying Light is more akin to John le Carré's recent novels, such as A Most Wanted Man. The agenda may be different, but a similar sense of outrage comes through. The comparisons to le Carré and Deighton are not just thematic, too. Porter is one of the best thriller writers to emerge in the last decade.

The theme is personal freedom, and the way in which the British public  have allowed their politicians to whittle away at personal rights to an unprecedented degree: the United Kingdom is now the most heavily surveiled nation in the world, so that  our rulers know more about what we do (theoretically) than those of North Korea or China. As with the curtailment of liberty elsewhere in the Western world, the excuse used is the fight against terrorism, which is at first sight a reasonable idea but is less so when the possibility of emergency powers being abused (as has happened on a small scale with local councils using anti-terrorism powers to track down benefit fraud) or when it fails to halt attacks. The inquests into the deaths of those killed in the 7/7 bomb attack on the London underground are happening as I type: clearly the new powers and surveillance, almost all in place in 2005, were unable to save these lives. The bombers were identified on CCTV footage, but only after the attack itself took place. At the same time, the Guardian has reported that counter-terrorism would be kept safe from the government's massive programme of cuts: the UK will still be spending billions on surveillance of its citizens. (Most of the links in this post come from the Guardian not because of its political leanings, but because of its interest in civil liberties beyond that of much of the UK press.)

One legislative move which particularly concerns Porter is the Civil Contingencies Act 2004 (official description / critical assessment).This gives wide ranging powers over a thirty day period to the government in the event of a disaster (natural or otherwise), removing the right to assembly, allowing movement to be restricted to and from "sealed areas" and mobilising the armed services. It didn't originally define the emergencies in which it could be used very stringently, leading to accusations that events dealt with by the emergency services as part of their normal working would be possible triggers for the act; this has since been amended. It still doesn't provide any sanction for misuse (if the "emergency" turns out not to be one). It has been described as making it possible that "at a stroke democracy could be replaced by totalitarianism".

I have gone into detail about this partly because, as Porter points out, it is important and yet ignored by those it affects. I was already aware of the surveillance, but had never heard of the Civil Contingencies Act: this is a novel which made me want to write to my MP.

The relationship with Brandenburg is that the earlier novel is about the fall of the Soviet bloc communism, so is about the gaining of rights, while The Dying Light is about the extinction of rights. To me, the title and theme suggest Dylan Thomas' famous lines (about death):


Do not go gentle into that good night.
Rage, rage against the dying of the light

To give away our rights without protest is to gently acquiesce in the dying of the light of our civilisation.