Leslie Charteris: The Saint in Pursuit (1970)

Many of the later Saint stories are adaptations of episodes from the TV series (both The Saint with Roger Moore and Return of the Saint with Ian Ogilvy), but The Saint in Pursuit is I think unique in that it originated as a comic strip printed in American newspapers.

The story is a fairly standard Nazi Gold caper set in the late fifties (when the strip first appeared). A young woman, whose father was in the US Army and disappeared towards the end of the war, receives a letter from a lawyer sending her to Lisbon. This alerts US military intelligence, which still has some questions it wants to have answered about her father's disappearance. He worked as an investigator, and he may have disappeared because of this work, which involved tracing large sums of money - and they want to know why. They in turn contact Simon Templar, who did some work for them during the war (as detailed in the Saint novels from The Saint in Miami to The Saint on Guard). The Saint is hardly going to turn down this treasure hunt assignment...

Without stretching the format, or even giving Charteris any need to think very hard, this is an enjoyable Saint book, and one which delights the collector in me, as its acquisition leaves me with just three to complete the set. My rating - 8/10.
Posted by Simon McLeish at 12:11 No comments: 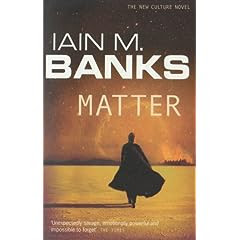 Like several of its predecessors, Iain Banks' latest Culture novel begins on a comparatively primitive world which is not part of that galactic civilisation. There, traitorous plotters have murdered the warlord of the burgeoning empire of the Sarl, proclaimed the death of his eldest surviving son, and set their leader as regent for the younger son. The elder brother, Ferbin, is the central character of the novel, which is about his journey to seek refuge with the Culture, before attempting to gain his revenge. He chooses the Culture because his sister earlier joined them, in a move viewed by their father as the equivalent of a dynastic marriage, whereas in fact she has become an agent of Special Circumstances. an organisation which features in most of the other Culture novels. As described here, they are "practitioners of that ultimately dark art of always well meaning, sometimes risky and just occasionally catastrophic interference in the affairs of other civilisations": the ideal people for Ferbin to interest in the fate of the Sarl.

What is it about this scenario, that of an advanced race observing (and interfering in) the political manoeuvrings of a comparatively barbarous one, holds such an appeal for Banks? It is of course an enduring science fiction plot device, clichéd enough to appear in several episodes of the original Star Trek, hardly ground breaking even in its own day. One benefit used by Banks here and elsewhere in the Culture novels is that it enales the writer to combine ideas from the science fiction and fantasy genres (as Anne McCaffrey does in the Pern novels too, in a less literary manner). A more important general reason for its use in science fiction is that it enables ironic parallels to be drawn between the story and the way that superpowers have interfered in the affairs of other nations, from the development of European colonial empires to the present day war against terror.

The hidden interference with the Sarl and other races gives the plot of Matter several levels. The plotting of the Sarl nobility is influenced and motivated by plotting by the races which are meant to mentor the various nations on their world, while the more still more technological advanced civilisations like the culture look on from afar, with their interference limited by treaty and custom. The interwoven conspiracies make for entertaining reading, while their parallels with the activities of the real nations on Earth give a slightly uncomfortable edge to this entertainment.

In this edition, the Appendix - a list of names and glossary - is between the last chapter and the Epilogue. So a reader who stops at the apparent last page of the narrative will most some of the tying up of loose ends. There is also another extra, a reprinted magazine interview with the author, which is worth reading for fans.

Matter is not as brutal as many of Banks' novels. It has fairly clear cut "good" and "bad" guys: the sympathies of the reader are clearly engaged by Ferbin and the Culture. This makes it one of the most conventional novels Banks has written, whether science fiction or not. Even so, there is room for plenty of invention. So not Banks' deepest novel, but I felt it was one of the most enjoyable entries in the Culture series: 8/10.
Posted by Simon McLeish at 08:06 No comments:

There are several Dorothy Sayers novels which have an unusual background: bell ringing in The Nine Tailors, the Bohemian London intelligentsia in Strong Poison, and so on. This idea is not that uncommon in crime fiction since her day, but she makes her backgrounds more closely integrated with the puzzle than is often the case. Murder Must Advertise is the best of these in many ways. Like Gaudy Night (Oxford womens' college), it uses a setting extremely familiar to the author, that of the adverstising agency, similar (one assumes, but for the likelihood of violent death) to the one in which she worked. It even has a character, a copy writer named Miss Meteyard, who is clearly something of a self-portrait.  Advertising has obviously changed since the 1930s, so this makes Murder Must Advertise something of a historical record, particularly with episodes such as discussions about how to encourage more women to take up smoking which would be viewed rather differently today.

The novel begins when a new copywriter arrives at Pym's agency, to fill the place of a man who died falling down the stairs. The new man signs himself Death Bredon, and the reader is likely to realise very quickly that these are the middle names of Lord Peter Wimsey, undercover to unravel a death more suspicious than it first appears.

One aspect of the novel doesn't really work at all. As part of the investigation, Lord Peter needs to charm a wild young woman, a rich society party-goer who is involved with a set connected to drug smuggling. He does this - rather bizarrely - by dressing up as Harlequin and playing silly but mysterious games to tantalise her. This includes physical feats unlikely to be carried out by a twenty year old (unless a circus acrobat), let alone Lord Peter, who is described as being about twice that age. The contrast between these sections and the rest is rather jarring, and doesn't encourage belief in Lord Peter as a character. I also felt that it was unlikely that Lord Peter, who is supposed to be so well known to the public, was not recognised in what seems to have been a playing of a role with no real disguise of his features - he is nearly discovered at one point because he is still wearing tailored clothes which would be far beyond the means of the man he is supposed to be.

On the other hand, one literary trick does work, even though it must at the time of publication have seemed out of place in a crime genre novel. At several crucial points in the novel, Sayers places paragraphs which consist solely of advertising slogans (for the made up products of Pym's clients). Apart from punctuating the narrative, they provide a particular kind of background, due to the all pervasive nature of advertising in the twentieth century. A successful advert needs to catch the mood of the moment, and feed off it, or else it won't be able to capture the imagination of the consumer - they are in a way the essence of popular culture. This means that the style of adverts is instantly evocative of the time of their creation, and makes these paragraphs in Murder Must Advertise redolent of the early thirties.

Flawed, but still one of the best classic crime novels - 8/10.
Posted by Simon McLeish at 07:56 No comments: