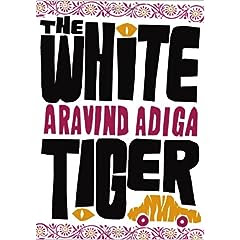 In my reading of Booker prize short listed novels, I've reached the 2008 winner. While many short listed novels fail to interest me, The White Tiger received reviews which made it sound more likely to be my cup of tea; and this indeed turned out to be the case.

The White Tiger of the title is the narrator of this novel. As a small boy in an Indian village school, he is told that his intelligence marks him out from the rest as the colour of a white tiger does. But he has no real chance to use that intelligence, due to the extreme poverty of his background: his family is so poor that the needs of fighting for survival leave no one with the time to give him a name, so that he arrives at the school just known as Munna ("boy"), and the teacher has to give him a name - Balwan Halwai - to enrol him. However, by the end of the book (as is revealed right at the start, so this isn't giving anything away), he has become a rich entrepreneur in Bangalore, centre of the Indian IT industry's outsourcing boom.

The White Tiger is structured as a series of long emails from Balwan to Wen Jibao, (real life) Chinese statesman about to visit India. The emails are meant to explain something of the reality of life in India, behind the sanitised facade presented to foreign visitors, particularly when they are important politicians. Balwan does this by describing how he developed from the poorest of poor children to a rich businessman. A typical example anecdote is the contrast between India presenting itself as the world's largest democracy, yet when Balwan is eighteen, he is made to sign a piece of paper entitling his village's landlords to use his vote as they see fit for the remainder of his life.

It is easy to assume that this is a satirical novel in which everything is exaggerated for comic effect. Perhaps it is, and I'm pretty sure that at least the events described are unlikely to have ever happened to just one individual. However, Adiga writes in such a way that everything is believable - at the time, at least. Even if I had ever actually visited India, I would have been the kind of foreign outsider - a tourist - who would not have seen the worst side of India's poverty. So it's hard to evaluate the plausibility of The White Tiger. Some things, like the vote anecdote, I think are likely to be true; others, like the issue of Balwan's name, seem much more unlikely.

India figures heavily in the list of Booker winners I particularly like: Midnight's Children, The God of Small Things (also a first novel) are the obvious examples, and would probably be high in many best Booker winner lists. Like those, The White Tiger goes beyond the somewhat simplistic view that many Booker shortlisted novels seem to have about the British Colonial past; there may be plenty of reasons why the British should feel post-colonial guilt, but not everything bad that has happened since independence can be the fault of the colonial administration. The three books also use black humour, to differing extents: Adiga most, then Rushdie, then Roy. And all three are very atmospheric.

No matter how dark things get, The White Tiger is viciously funny. It is an unusually accessible and enjoyable Booker novel, and I would definitely endorse it as a worthy winner - 9/10.
Posted by Simon McLeish at 08:41 No comments: