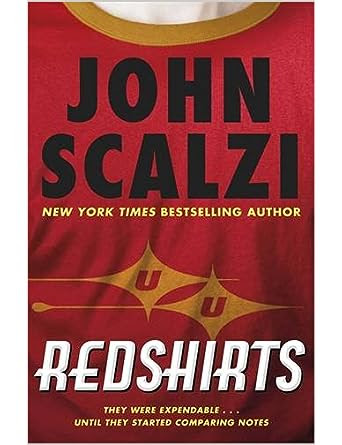 Redshirts is based on a fairly simple but effective idea. In bad science fiction television shows - and the original series of Star Trek was especially notorious for this - there are frequent missions in which the dramatic tension is racked up by killing off one of the characters, almost always an ephemeral one with no back story played by an unknown actor. In Star Trek, these individuals usually wore red shirts. Scalzi's idea is to look at these events from the point of view of the low ranking, inexperienced officers who would be likely candidates for death by the writers' pens.

What makes Redshirts more than a fan-fiction style parody is Scalzi's use of multiple levels of irony, as his characters gradually become aware that they are living in a fictional universe, when, in fact, they and the writer of the TV show are fictional products themselves. Not only that, he manipulates the plot to use this in a variety of ways, some more subtle than others. For instance, he invents an episode of The Adventures of the Intrepid, part of the novel's back story, in which an encounter with a black hole sends the characters back to 2010 (the date at which the episode is supposed to have been broadcast), which is, as the characters point out, a science fiction cliché which makes it possible to comment on contemporary society as well as (in a low budget TV show) saving on production costs. The ironic twist is that when Ensign Dahl and his companions use the same trick in order to complain to the show's writers about their treatment, they travel back in time to 2012, when Redshirts was published.

There is a widely circulated stereotypical view that Americans don't understand irony. This is something which Scalzi disproves with ease. When, therefore, we notice that, in his effort to highlight the absurdities in the cliché of the expendable extra, Scalzi has fallen into another common recourse of the lazy genre writer, the apparent weak character who turns out to be the hero of the story, we might well suspect that something else is going on. That this is common (good examples include stories by J.R.R. Tolkien, Robert A. Heinlein and Lois McMaster Bujold) is almost an understatement - it is something which is part of the appeal of science fiction and fantasy to the teenager and especially the stereotypical type of fan, the geeky social outcast. To some extent the use of this trope is n inevitable consequence of the premise of Redshirts: by concentrating on the minor characters, he is promoting them to central status. I am sure that Scalzi is aware that he has done this, and that it is therefore another ironic twist in the novel's construction.

John Scalzi's work is frequently compared to that of Robert A. Heinlein, partly because the military science fiction of his debut Old Man's War reminded people of of Starship Troopers. In a recent blog post, he asked people to suggest writers that his work might be compared to, and he specifically said that there was no point in answering, "Heinlein". Here, though, two other writers came to my mind. James Blish is an obvious point of comparison, as the writer of many Star Trek novelisations, though it is far too long since I read any of them for me to pick out specific similarities (and I think that TV science fiction, including Star Trek itself, is a far more important influence anyway). A more obscure writer, though, has touched on a similar theme, with the same kind of humour but without the irony: James Alan Gardner's League of Peoples series is about the role of ECMs (expendable crew members) in space exploration.

In my view, Redshirts is Scalzi's best fiction so far. I enjoyed Old Man's War and Agent to the Stars, but found The God Engines unreadable. I've generally found his blogging more interesting: I would urge everyone to read the fabulous collection of his blog posts in book form, Your Hate Mail Will Be Graded (almost worth reading from the title alone). Enjoyable, funny, approachable, yet with clever irony, I rate Redshirts at 9/10.
Posted by Simon McLeish at 21:23 No comments: