Like The Blood Red Game (which I bought in the same second hand bookshop as The Twilight Man in May), this is a reworking of an earlier piece of writing, in this case a serial which was written to fill space in New Worlds during the earliest months of Moorcock's editorship of that later famous science fiction magazine.

Clovis Marca is a former leader of Earth's government, leading a humanity which is now doomed to extinction after an alien visitation has left everyone infertile. As the book begins, Marca returns from a year in space, his way of dealing with the catastrophe. The desperate decadence of the society he finds on his return is a clear precursor of my favourite Moorcock series, The Dancers at the End of Time.  The Twilight Man is a staging post between it and the Arthur C. Clarke novel, The City and the Stars, which appears to have influenced Moorcock greatly, though I do not actually know that he read this particular novel (as I discuss in its review). Doomed decadence is one of Moorcock's recurring themes, as well - part of what he wants to say to his readers through his writing.

While much more Moorcockian (so to speak) than The Blood Red Game, The Twilight Man is still not fully individual in its style: clearly still the work of a writer finding his way, even five years after the publication of the first Elric novel, The Stealer of Souls. Perhaps because it is more like the author's later work, The Twilight Man is less interesting to read than The Blood Red Game: it is slightly too much like the fan's guess as to what early Moorcock would be like to engage.

Reasonably enjoyable in itself, I would give The Twilight Man 6/10.
Posted by Simon McLeish at 18:08 No comments: 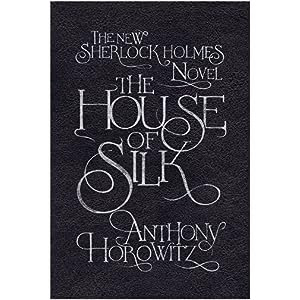 The character of Sherlock Holmes has been part of a huge literary industry, possibly the largest collection of what would now be known as fan-fiction ever produced. But The House of Silk remains an unprecedented event, being the first Sherlock Holmes novel actually authorised by the estate of Arthur Conan Doyle. The writer chosen to produce this work is Anthony Horowitz. His prior literary output consists of thrillers for teens, the Diamond Brothers and the Alex Rider series. Rather more relevant, I suspect, is his role as the creator and writer of the acclaimed historical crime TV series Foyle's War.

As an authorised continuation of Conan Doyle's writing, it is to be expected that The House of Silk is more like the 'canon' than much of the Sherlock Holmes literature produced by other writers, and this is indeed the case. It does use some of the common devices of Holmes fan-fiction, in particular the idea that narrator Dr Watson had cases that he wished to write about but which were to sensitive to publish, and which were then stored after his death for a number of years. It does not play around with the canon as some Holmes novel do, including some of my favourites, Laurie R. King's Mary Russell series.

The many Conan Doyle-like touches include an American connection, with the story opening with Holmes employed to track down a man who has been terrorising his client, believed to be a gangster from Boston, Mass., where Holmes client had been instrumental in the capture of the gang he belonged to. This story bears a resemblance to the Scowrer plot in The Valley of Fear, also involving the early employees of the Pinkerton detective agency working against a violent gang.

Slightly oddly, given the potential of a series of authorised Sherlock Holmes novels, The House of Silk seems to be designed as a one-off, judging by the preface and afterword (in which John Watson explains the reasons for not publishing this story at the time it happened). Maybe Horowitz didn't enjoy writing this, maybe the Conan Doyle estate only wanted a one off - there's plenty of time for more, though, before the final US copyright runs out on a Sherlock Holmes novel (assuming no changes in the relevant law before then).

The incidentals of the tale - the atmospheric depiction of Victorian London and its exotica, the energetic sleuthing of Holmes and Watson, and so on - are very much done in the Conan Doyle manner, but I found the puzzle very simple indeed. I found it a bit hard to work out whether this is authentic recreation of canon, or something which is Horowitz's own, because I know the Holmes stories fairly well so am not surprised by the twists in them, and I am a much more sophisticated and experienced reader of detective fiction than I was when I first encountered Sherlock Holmes in a comic strip version of The Sign of Four in the pages of Look and Learn in the mid-1970s. Thinking about it, I feel that the mysteries in Conan Doyle are mostly more difficult for the reader to solve. This is my only real caveat; in every other way, The House of Silk is a pretty good addition to the Sherlock Holmes industry, even if in 2012 it would be hard to write a novel with the impact of the original series that was true to the originals as this is. My rating: 7/10.
Posted by Simon McLeish at 10:46 4 comments: