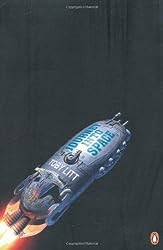 Warning: this review is going to contain lots of spoilers, without which it would be hard to say what I want to say about it. Please don't read if you don't want to know the plot of the novel.

Toby Litt is, incidentally, someone I used to vaguely know (I had rooms on the floor below him for a year when we were students). Some of his novels I like a lot, and others not at all. Journey Into Space is the first of his books which I have read which comes between the two extremes. Or, rather, it moves from one to the other, as the story progresses.

Journey Into Space is divided into five sections, each shorter than the previous one, which gives an overall impression spiralling into a central point because of the way the plot develops across them, as well as because of influence the decreasing length has on the reading experience. The whole thing is set on that standard science fiction location, the generation ship on its way to colonise another world, inhabited by a very small community. (In-breeding, something which concerns some of the other writers of this type of stories, is simply handled by gene technology.) The plot covers four generations of life on the ship, not starting at the launch but several generations into the journey.

The first section is the most unusual in science fiction terms. It concerns the meetings between two teen-aged cousins, who share their ideas about Earth, a world they have never seen except in the records carried by the ship and messages received by it. The main way they do this is through "describing", where each tries to make the other feel what it would be like to experience something - rain, grass, the presence of animals - they have never known themselves. The theme here is nostalgia, and how we look at a past we can never actually see fully. This might feel like an extended creative writing exercise ("Produce 500 words describing grass from the point of view of someone who has never seen it in reality"), but it is effective at generating a mood which is shattered at the end of the section - Celeste gives birth a child (in a strange passage using a series of images derived from the describes, while the pair are shunned for their incestuous relationship.

In the second section, the child, named Orphan, takes over as the centre of the narrative. He charms his way into becoming the captain of the ship, despite not being terribly bright, and becomes regarded as something of a king and god. He institutes a perpetual, hedonistic party, where everything is done on his slightest whim (though he is manipulated into making decisions by others who have more interest in running the ship). This section seems to be a commentary on a different aspect of today's world, where we are living in the moment without a care for the traditions of the past or for the effects our way of life will have on generations to come. The main problem with this section is that Orphan, as depicted, does not convince the reader hat he has the charm he is credited with

The third section follows the life of Orphan's third child, imaginatively named Three, from spoilt child to ascetic obsessed with being able to write on paper in the old fashioned way, and centre of a new religion, proselytised by her nephew.  It is in this section that news reaches the ship that humanity on Earth has destroyed itself. In the final two sections, the nephew takes over the ship after Orphan and Three die; the ship then returns to earth, receiving a signal to indicate that there have been some survivors, before being deliberately crashed into the earth to obliterate defective humanity (leaving just two survivors, in an escape pod, who know that there is no way they can properly survive). This nihilistic section is much less clearly linked to commentary on twenty first century humanity. It seems perfunctory, and poses a fairly common conundrum - how does the narrative survive and who adds the final words describing the death of the last two humans orbiting earth? It may be that this ending is meant to provide some positive message of hope: somehow, some remnant of human civilisation has continued - but it isn't effective in this way for me, being swamped by the nihilistic theme of the book, which seems to be that the human race is better destroyed than allowed to continue.

The message of Journey Into Space (assuming I haven't just completely misinterpreted the novel, and there is one) is made so much the centre of the novel that other aspects of fiction writing suffer, especially characterisation - Celeste and Three are the only individuals given much in the way development. Apart from the descriptions which form part of the game between Celeste and August, there isn't much filling in of the background; like a lot of modern science fiction, Journey Into Space assumes that the reader will be familiar with the basic idea of a generation ship, for instance.

While there are some interesting ideas in Journey Into Space, parts of it simply don't work, and it generally feels under-developed. My rating: 5/10.
Posted by Simon McLeish at 18:45 No comments: