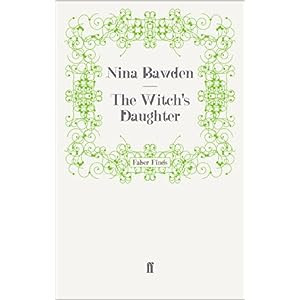 This is the second book I have read from Faber's "Faber Finds" series of reprints, and the second which has been a revelation. Nina Bawden is not a writer who is entirely unfamiliar to me; I am sure that I read some of her books as a child, but no titles spring to mind unprompted. I definitely hadn't read The Witch's Daughter before.

The story is aimed at young readers of around ten or eleven, and is set on the fictional Scottish island of Skua. Two girls are central to the tale. The first, Perdita, is native to the island but is an outsider to the community because she is the orphaned daughter of a reputed witch, and spends her time running wild on the island, having never been to school. The other, Janey, is a visitor to the island, with her family; she too is separated from those around her, because she is blind.

Even today, I cannot think of another children's book which has as unusual a pair of characters at its centre. In 1963, it must have had a huge impact to its readers. Just think about what would have been popular books at the time for children of about this age to read, especially from the "classic" children's authors. Enid Blyton, Anthony Buckeridge, C.S. Lewis, Arthur Ransome, E. Nesbit, Richmal Crompton... All these writers feature children from upper middle class backgrounds (Crompton's Just William perhaps slightly less "upper" than the others), almost all attending private schools. The actual plot of The Witch's Daughter - the discovery of stolen treasure, and the children, unable to convince adults of its reality, trying to outwit the thieves themselves - could be from any one of Enid Blyton's popular adventure series - The Famous Five, or The Secret Seven, for example. Whether or not Bawden deliberately set out to counterbalance these stories, she succeeds in doing so, without preaching.

To any receptive child, The Witch's Daughter will have a lot to say about what it means to be different from those around us, and how even those who are dismissed from consideration in society have the ability to have adventures and do amazing things. Whether this Faber Finds edition is one which will appeal to children is another thing. In the midst of colourful, bright, and illustrated children's books, this is plain and has a only a couple of illustrations, and also has very small print: Faber seem to be aiming it at adults who remember the book from their own childhood, by using the standard packaging from the imprint. Perhaps they might read the book to their own children - I would definitely recommend it to parents whose children are the right age. My rating: 9/10.
Posted by Simon McLeish at 18:46 2 comments: