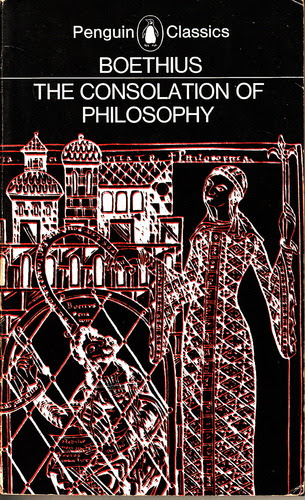 There are a few books which have had a huge influence on the age in which they were written. However, few people today read The Consolation of Philosophy, which could be considered the foundation of medieval culture.

Boethius was a statesman in sixth century Italy, just after the final fall of the Western Roman Empire, but was disgraced and imprisoned; like many politicians in that situation, he maintained his innocence. But in prison, according to the account in this book, he underwent a mystical experience, being visited by a woman he eventually recognises as Philosophy, who goes on to teach him to treat his situation in what could nowadays be termed a "philosophical manner".

What appealed to the medieval mind about this? From the literature of western Europe over the next nine hundred or so years, it is partly the mystical element, and partly the allegorical flavour - the figure of Philosophy is a precursor of many later personifications. Not only that, but Boethius' distillations of classical philosophy, as well as his translations of Greek philosophers into Latin, were the main way in which their thought survived in an age of little literacy and where Greek scholarship was almost non-existent. Writers and thinkers influenced by The Consolation of Philosophy would include almost every notable figure from the best part of a thousand years of history.

The only book I can think of with a similar effect is Bunyan's Pilgrim's Progress, which has many points in common with The Consolation of Philosophy. The later work was basically a way to make it easier to understand Puritan ideas about Christian salvation, while the earlier was doing the same with classical philosophy;  both had allegorical elements, Bunyan's more so; both authors were imprisoned, with prison playing an important part in their books; both proved incredibly popular and influential. The influence of Bunyan continues to this day, and many of his figures of speech have entered the English language ("slough of despond", for example); Boethius was responsible for the popularity of the idea of a "wheel of fortune", though he did not invent it.

Essentially, what Boethius is doing is a popular exposition  of neo-Platonist thought. He was a Christian, and yet is pretty circumspect about his theology in the book, talking of "God" but never mentioning Jesus. Some readers have wondered whether he was a Christian in name only, as he would have needed to be to be a successful politician in sixth century Italy, but his approach to philosophy inspired the medieval mind because he is able to start bringing the pagan thought into a monotheistic context, a process which culminated in the elaborate systems of Thomas Aquinas celebrated in Dante's Divine Comedy.

In modern editions such as this one, The Consolation  of Philosophy is divided into books each made up of several sections, which each end with poetry. Boethius was famed for his Latin prose style, though Watts does admit that the poetry is uneven in quality. Not having ever read the original, I wouldn't know, and it is perhaps less apparent in this translation, which I would suspect is not as great as Boethius at his best nor as poor as his worst, but is more even throughout. This is also one of the most academic of the Penguin Classics translation in its presentation (the actual translation is clear and readable enough), with footnotes identifying references in learned articles throughout.

Ours is an age which has learnt from the romantics to value "originality". Perhaps less so now than a few years ago (after all, what is original in the albums of the latest winners of the X Factor). I suspect that this is part of the reason why Boethius' work fell out of favour. As a philosopher, he does not claim to have any new insights - just ways to put together old ones to appeal to modern (in his time) tastes. As a distillation of ancient philosophy, the alternating prose and poetry is perhaps harder to get into today when it is not the kind of writing commonly encountered; there are far better introductions for the modern reader, which would go on to later thought - for a philosophy beginner who wants a close modern equivalent, where fiction and philosophy mingle in an approachable manner, I would recommend Jostein Gaarder's Sophie's World, aimed at a young teen audience but with plenty of charm for older readers.

The Consolation of Philosophy appeals to me because I have long been interested in the medieval way of thought. Perhaps in itself it has less to offer than as a window into a very different, yet recognisable, world to the modern West. But in the end I rate it at 8/10.
Posted by Simon McLeish at 20:55 No comments: